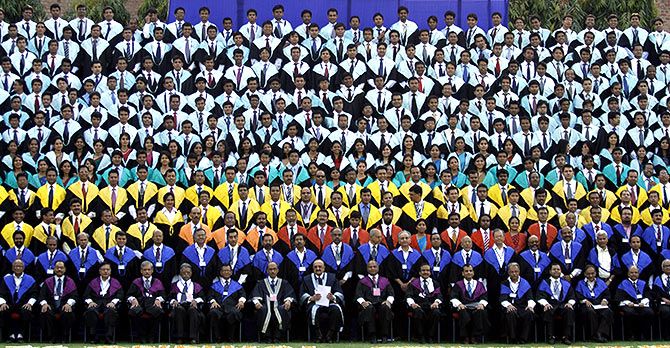 Pick up any business daily and it is impossible to miss the consistent hosannas sung in honour of India's booming e-commerce sector. Stars of this brigade, from Flipkart's Sachin and Binny Bansal to Snapdeal's Kunal Behl, regularly make it to awards ceremonies where they are rewarded for their foresight in setting in motion what is now universally acknowledged as Indian ingenuity's latest poster child.

Meanwhile, the situation on the ground points to a less rosy picture. The Indian Institute of Management Kozhikode completed its placement season in January and trends suggest e-commerce companies have begun giving B-school campuses the miss.

While the placement season was overall successful with average salary for the batch at Rs 17 lakh (Rs 1.7 million), the e-commerce story on campus took a fall. (When I graduated from another IIM in 2012, the average salary was in the range of Rs 10 lakh (Rs 1 million), so at least for B-school grads, achhe din seem have to have arrived.)

The IIMs have always taken the pick of the lot when it comes to traditionally high-paying sectors such as consulting and investment banking. This was repeated at IIM-K this year too, with finance making offers to 21 per cent of the batch and consulting to 28 per cent.

Sales and marketing absorbed 27 per cent. The story is expected to repeat itself at the top three, IIMs A, B and C, where placements are either undergoing or will take place over the coming weeks.

Over the past few years, e-commerce giants such as Amazon, Flipkart and Snapdeal have been offering top-dollar packages to IIM grads as well as at a slew of other schools such as MDI, Gurgaon and S P Jain, Mumbai.

Last year, Flipkart and Snapdeal picked up 13 and 19 students, respectively, from MDI Gurgaon. At S P Jain, the respective numbers were 17 and 11.

This has diminished drastically this year. At MDI this year, both companies picked up 2 candidates each. Neither company even visited S P Jain this year.

Amazon cut down its tally at S P Jain to 8 from 22 last year. Flipkart skipped IIM-K and even Amazon's numbers took a 30 per cent drop there.

Speaking to NDTV in January, Nikesh Arora, president and CEO at Softbank, said that this year will be the year of consolidation in the Indian start up space. Last year was when big monies poured into a number of companies.

Some such as Oyo Rooms and Paytm have been able to sustain themselves and even post impressive growth on the back of sound business models. Others, Arora said, will bite the dust.

Curiously, the case of the Big 3 -- Amazon, Flipkart and Snapdeal -- is different. Since the entry of Amazon into the market, all three firms have been on a fierce expansion spree, offering big discounts that grow the topline, but continue to bleed the bottomline.

Amazon, flush in cash from its parent company, can take the fight to the finish, but what effect this will have on the sustainability of the e-commerce model is anyone's guess.

The caution that Arora sounded seems to now reflect on B-school campuses. Over the past few years, e-commerce companies have recruited candidates for a variety of operational, sales and IT roles. As these companies looked to strengthen their supply chains and control the last-mile of delivery, operations, otherwise the unglamorous cousin of more popular concentrations, suddenly turned snazzy.

But the warning signs are already here. Amazon's net loss for its India business for the year ended March 2015 was a whopping Rs 1,700 crore (Rs 17 billion), and if we add to this the losses incurred by Flipkart and Snapdeal, the figure crosses Rs 5,000 crore (Rs 50 billion).

Investors will increasingly come to question the sustainability of these figures. Due to rising Internet penetration and a large middle class eager to buy goods, India's online retail story has been pegged as a game-changer for some years now. But the most potent business prospect will fail in the long term if it cannot find a way to make money.

It is common to hear e-commerce stalwarts say that this a growth period and that investors should stay patient as firms build scale. But no business, not even tech royalty such as Facebook and Google, can look to the future interminably.

Without ad revenue, which both firms are masters at earning, their world domination designs would have come unstuck. Look at their peer, Twitter, also an A-list company when it comes to shaking things up, but which continues to be in peril due to its inability to monetise its millions of users.

Does the reduction in B-school recruitments, then, indicate a much-needed correction? I would not bet my money on it. The e-commerce space receives outsize media coverage and, thus far, heavy investments that have made them the darlings of the tech pack in India.

As of now, there are no signs of these players hitting the brakes. But they should. Unless greater consolidation happens or unless a less money-burning strategy is thought up soon, the drop in B-school numbers is likely to become permanent.