Invest through MF route in mid-caps

The worst may perhaps be over for these stocks, suggests Sanjay Kumar Singh.

Even the mid-cap and the small-cap index have shown signs of revival.

Investors are wondering if this is a good time to enter these stocks.

Mid and small-cap indices were more expensive than the large-cap index in December 2017.

But owing to two years of correction, the mid and small-cap indices today trade at a discount to the large-cap index now (see table).

Valuations have, however, not turned uniformly attractive.

"Quality stocks within the segment are still trading on the higher side of the valuation curve," says Vinit Sambre, head of equities, DSP Mutual Fund.

But the worst may perhaps be over for these stocks.

"It appears that the Nifty Midcap index and this universe have bottomed out," says Amit Khorana, head of equity, Dolat Capital.

Investors, need to temper their optimism.

"Given the economic situation, we don't expect massive outperformance on the earnings front. Investors may enter the category now, but with a longer-term horizon of at least five years to earn sound returns from these categories," says Sambre.

Instead of trying to catch market cycles, many money managers try to latch on to those mid and small-cap stocks that have the potential to grow into large-caps.

They then hold them throughout their growth phase.

Identifying potential winners, however, is easier said than done.

According to a recent Citi report, only 2% of small caps have become large caps over the past 10 years, while 20% have either ceased to exist or are no longer listed.

The odds are better for mid-caps, with 15% able to scale up to large-cap territory.

However, almost two-thirds got downgraded to small caps.

Identifying potential winners requires a lot of due diligence.

"If the pond itself is small, a fish cannot outgrow it," he says.

Investors should also examine the return on capital employed (RoCE) across cycles (higher the better).

The company must also have the ability to grow with internal accruals, and without resorting to debt or equity dilution.

The investor should also be able to evaluate the quality of the promoter -- his background, competence level, and even his hunger to make it big.

"I prefer owner-operated businesses with skin-in-the-game, that is, high promoter holding. It's even better if it's a first-generation entrepreneur," says Khemani. 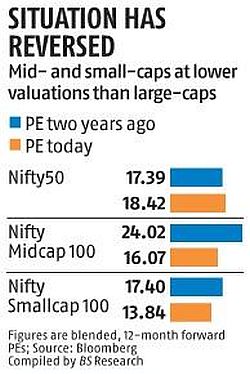 Regulatory changes have altered the environment drastically for smaller companies.

"Many companies in this space that functioned on the basis of regulatory and tax arbitrage have seen their businesses turn unviable," says Prasanth Prabhakaran, joint managing director and CEO, Yes Securities.

He adds that companies that are large and compliant will continue to become larger while those in the mid-cap space that operated in grey areas will not be able to do so any longer.

The Goods and Services Tax has had a big impact.

Companies have to pay GST to the government immediately, while their billing cycle may be such that they may get the money from clients after three months (or even later in this slowdown).

This creates a liquidity crunch for many midcaps.

Non-banking finance companies, which are facing their own liquidity crunch, are reluctant to lend.

Prabhakaran says investors should enter mid and small-caps with professional help as they need someone who can weed out companies that are over-leveraged, not tax-compliant, or facing a working capital crunch.

Watch out for governance issues

During a bull market, even mid and small-caps with poor corporate governance standards come to command large valuations.

But when the downturn comes, such companies fail miserably.

Many of them lose 60% to 90% of their market cap and never recover to their previous peaks.

Given the amount of due diligence required, most investors will be better off taking the mutual fund route (or PMS).

Accumulate mid and small-caps during bear phases and book profits during bull phases.