When FEE began funding the education of bright Indian youngsters a few years ago, they didn't expect that 90 of their MBBS interns would join the fight against COVID-19 in 30 different Indian cities across 11 states.
Anjuli Bhargava reports. In 1982, after he sold his stake in a company he had set up in the US for a substantial sum, Prabhu Goel, a gold medallist from IIT-Kanpur and a Carnegie Mellon alumnus found he and his wife had a bank balance they could never exhaust with their Indian middle-class values, upbringing and simple needs.

That's when the duo came up with the idea of giving back, well before philanthropy became the fad it is today.

Many around them couldn't quite fathom their motives but they sounded noble so support was aplenty.

Goel himself was acutely aware of the fact that his father's dogged determination to ensure his son got a high quality education, along with his own drive, had brought him where he found himself.

Back in India, he always rued the fact that many children could not achieve their dreams due to lack of financial support from the family.

That's the gap he decided he could bridge with his personal funds. Once the couple had made up their mind, things began to fall into place.

In the early 1990s, on a visit back to India, Goel came across a young Muslim girl in Chennai whose father was insistent she learn tailoring, the family occupation; the girl herself was set on medicine.

After some persuasion and allaying of suspicions, the father agreed to let the Foundation For Excellence -- registered by Goel in 1994 and in its infancy at the time -- finance and take charge of his daughter's education.

The young girl is now an MBBS, working with a local hospital in her hometown. 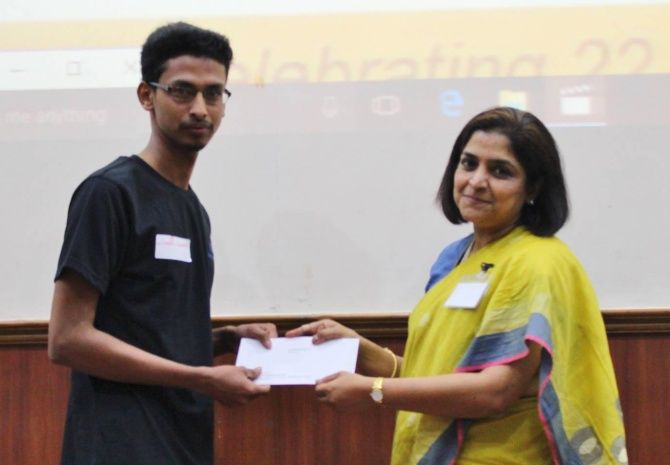 The foundation has since financed the studies of 9,000 engineers and close to 2,500 doctors, through over 20,000 scholarships over the last few years.

What perhaps is unique about FFE is how what the duo started appears to have acquired a life of its own over the last many years.

Initially, the potential beneficiaries were identified more by word of mouth than anything else.

But slowly, a strong, committed and cohesive network of over 500 volunteers who identify deserving candidates, verify their needs and authenticity and provide mentorship to the student -- and at times their family -- has developed.

The deserving candidates are screened thoroughly and then guided through their studies, career choices and are assisted with internships and jobs through the network of all associated with it. As FFE and its footprint in India grew, Goel managed to rope in a few gems.

Bengaluru-based Sudha Kidao, a doctorate in biological sciences from University of Texas, Austin, joined as FFE India's managing trustee and works with a missionary zeal on a voluntary basis.

On its board is also IIM-Bangalore professor and its soon-to-be-director Rishikesha T Krishnan.

What's been even more heartening for the FFE team at present is the fact that of the 221 FFE MBBS interns, 90 are currently fighting the COVID battle in 30 different Indian cities across 11 states, with 23 in Tamil Nadu alone.

This writer spoke to Abhay Shivaji Gupta, an FFE alumnus, who is currently an MBBS intern at Mumbai's H B T Medical College.

The 22-year-old has been pulled into work at the hospital's trauma centre, where they have over 50 confirmed and suspected cases of COVID-19.

Gupta's father earns a living by selling samosas at a local school but, with the school's closure during the lockdown, his income is nil at present.

The young boy hopes to support his family through his internship stipend of Rs 6,000 for the next few months. Goel himself worked with IBM and has been on the board of companies like Cadence in the US, making it relatively simpler for him and his vast network in the US to assist FFE scholars make their way to companies and dream jobs as far as engineers are concerned in Google, eBay, Yahoo, Apple among others and who in turn support other FFE scholars and help with placements.

The alumni -- especially those overseas -- usually maintain a close connect with the FFE leadership, assist each other through their network and several are now funding the studies of candidates in turn.

Goel says that the support network of the Indian-American community in the US is extensive and fund raising galas are usually attended and supported actively by alumni.

As FFE and its impact became better known, it's managed to pull more into its net even as far as funding goes.

Forty corporate CSR funds, over 1000 high net worth individuals, 15 charitable trusts and over 500 volunteers have pitched in so far.

When this writer met Goel in Delhi, he was heading to Singapore where venture capital firm Jungle Ventures was holding a fundraiser to support the foundation's work.

Several such fundraisers have helped pull in substantial sums in the US as well where the affluent Indian-American community is a big contributor.

Although he may have started the initiative, Goel, reticent to take credit, maintains that many others have helped bring it where it is today, strengthening his belief that if your intentions are right, things just have a way of falling in place.