8 out of 10 people were in favour of compulsory vaccination before a date.

In the past year-and-a-half, the pandemic has altered the world as we knew it.

With most of us confined to our homes and isolated from our loved ones, the initial months were challenging.

However, as days passed, people around the world found new ways and solutions to adapt to the new normal, including the way people looked at relationships.

Dating Web site QuackQuack conducted multiple surveys to understand the expectations and behaviour patterns of Indians while looking for a date.

'The pandemic has indeed thrown a few curveballs towards individuals wanting to date,' notes Ravi Mittal, founder and CEO of QuackQuack.

'Males and females alike are rapidly coming to terms with a new universe of online dating every single day and embracing more self-paced and healthier ways of dating, an evolving process that shall be the norm soon,' Mittal adds.

Takeaways from the dating survey:

Vaccination is a must 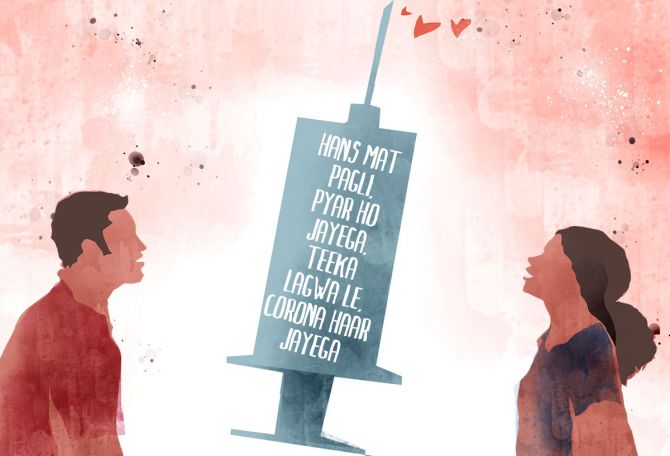 According to QuackQuack's survey 8 out of 10 people were in favour of compulsory vaccination as a precursor to a date.

The importance of a double jab was uniformly highlighted across both the top cities as well as the tier 2 cities of the country as 75% and 70% of the sample size belonging to each felt that the first step towards a safe date would have to be complete vaccination of the other.

It was also observed that 80% of women and 70% of men who were part of the survey sample felt the necessity of inoculation prior to dates.

Dating with a purpose

The survey outlined the notion that, owing to the protocols surrounding Covid in place, people have had very little reason to venture outdoors, thereby leading them to reflect on the nature of the dates they have found on the dating app as against plunging for matches with a sense of desperation.

47% of women and 35% of men, who were part of the survey, vouched for this behavioural change and also commented that the process of reflection and introspection led them towards healthier relationships than before.

The difference in the trend of intentional dating between individuals residing in urban areas and those belonging to rural or semi-urban areas was comparatively similar.

While nearly 37% of urban teenagers found their dating process had taken a purposeful turn, 39% of those from rural or semi-urban areas felt likewise.

Hailing from the same location is pivotal As many as 58% individuals (in the age group 18 to 20) and 56% (between 21 and 30 years) preferred pairing up with those belonging to a different location as it would help expand their radius of search for a prospective partner.

This trend seemed to be more prominent among women as 58% of them were comfortable dating partners from other locations as against a relatively lower 50% among men.

46% of those residing in major metro cities preferred dating beyond the confines of their home location whereas a comparatively higher 57% chose the same in the case of smaller cities as well as towns.

The numbers indicate that a significant number of individuals do not find location to be a major barrier when it comes to dating and are flexible with having partners from a place other than their own.

Video calling versus meeting in person A major percentage of 56% in the age group of 18 to 20 preferred having their first date on a virtual medium and were risk-averse owing to the ongoing Covid situation across the country.

In contrast, 43% people aged 30 and above, belonging to a more old school approach, chose to meet their date in person while following all the necessary safety precautions.