In 1998, pigs were the intermediate hosts.
In Bangladesh in 2004, humans became infected with NiV after consuming date palm sap that was contaminated by infected fruit bats.
Do not consume fresh fruits, date palm and other poorly washed, half consumed fruits, says Dr Usha Manjunath. 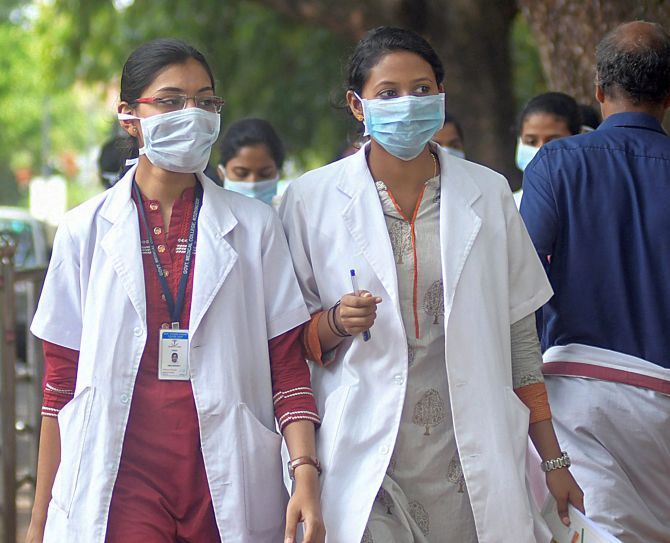 IMAGE: Doctors wear safety masks as a precaution after the outbreak of 'Nipah' virus, at a hospital in Kozhikode. Photograph: PTI Photo

India is currently grappling with news of a new epidemic caused by Nipah virus.

The virus has so far claimed ten lives in Kerala, including a nurse who succumbed to it  while treating patients at a hospital in the state.

The outbreak has been limited to Kozhikode and Malappuram districts in north Kerala so far.

But the virus, which gets its name from the place where it was first identified -- Kampung Sungai Nipah in Malaysia -- has no vaccine or effective treatment.

While there may be a good reason for some of us to worry about it, Dr Usha Manjunath, director Institute of Health Management Research (IIHMR) Bangalore offers some important information and suggests what you can do.

What is NIPAH virus attack? How is it caused?

NiV was first identified during an outbreak of disease that took place in Kampung Sungai Nipah, Malaysia in 1998.

In Bangladesh in 2004, humans became infected with NiV after consuming date palm sap that was contaminated by infected fruit bats.

What are the symptoms? How do you know if you are infected?

NiV infection in humans has a range of clinical presentations, from asymptomatic infection to acute respiratory syndrome and fatal encephalitis (inflammation of the brain).

Experts are of the opinion that Nipah Virus is an airborne transmission infection and can affect those who come in direct contact with contaminated bodies.

Nipah Virus is usually associated with inflammation of the brain due to which several days of fever can often lead to a state of confusion, disorientation and even persistent drowsiness.

If not taken care of, these symptoms can even cause a coma in a span of 24 to 48 hours.

There are many patients who show neurological, respiratory and pulmonary signs as well. Therefore, do not ignore any such signs.

Some common signs and symptoms of NiV are headache, fever, nausea, dizziness, drowsiness and mental issues such as confusion.

These symptoms can last up to 7 to 10 days. Watching out for respiratory illness during the early stages is also very important.

If you are infected, what should you do next?

Currently there is no effective treatment for Nipah virus infection. The treatment is limited to supportive care.

It is important to practice standard infection control practices and proper barrier nursing techniques to avoid the transmission of the infection from person to person.

All suspected cases of Nipah virus infection should be isolated and given intensive supportive care.

Passive immunisation using a human monoclonal antibody that targets the Nipah G glycoprotein has been evaluated in the ferret model as post-exposure prophylaxis.

The anti-malarial drug chloroquine was shown to block the critical functions needed for maturation of Nipah virus, although no clinical benefit has yet been observed.

m102.4, a human monoclonal antibody, has been used in people on a compassionate use basis in Australia and is presently in pre-clinical development.

If a family member is infected, what to do next?

As of now, there is no particular vaccine available purely for the treatment of Nipah Virus. The only way to treat this virus is through intensive supportive care.

Since drinking raw date palm sap bitten by a bat can also cause NiV, it is safe to say that you should stay from consuming date palm for some time.

Hospitals also need to raise awareness about symptoms and transmission to avoid human-to-human infections in such settings.

Detection is another issue with NiV and anyone who feels the symptoms should get tested thoroughly from a recognized facility.

Avoiding direct contact with infected pigs, bats and humans in endemic regions should be practiced.

Health professionals attending to such patients should take precautionary measures, such as wearing masks and gloves.

If you feel uneasiness when in and around an infected region, get yourself tested immediately!

Currently, what kind of people are at risk of the infection?

The risk of exposure is high for hospital workers and caretakers of those infected with the virus.

In Malaysia and Singapore, Nipah virus infection occured in those with close contact to infected pigs.

In Bangladesh and India, the disease has been linked to consumption of raw date palm sap (toddy) and contact with bats.

How can you prevent yourself? Please suggest some tips to stay safe

Prevention of Nipah virus infection is important since there is no effective treatment for the disease.

The infection can be prevented by avoiding exposure to bats in endemic areas and sick pigs.

Drinking of raw palm sap (palm toddy) contaminated by bat excrete, eating of fruits partially consumed by bats and using water from wells infested by bats should be avoided.

Bats are known to drink toddy that is collected in open containers, and occasionally urinate in it, which makes it contaminated with the virus.

Surveillance and awareness are important for preventing future outbreaks.

The association of this disease within reproductive cycle of bats is not well studied.

A subunit vaccine using the Hendra G protein was found to produce cross-protective antibodies against henipavirus and nipavirus has been used in monkeys to protect against Hendra virus, although its potential for use in humans has not been studied.