These yoga practices will help you manage your metabolism in peak condition.

There is a lot of confusion about metabolism -- should it be fast or slow, and which is better? This columnist is also guilty of having used the concept of “speeding” up or making metabolism fast through certain dietary or yogic intervention. But the real trick -- and which is buried under this confusion -- is to really make the metabolism efficient. If it is too slow, to make it fast, and if too fast, to make it slow. The ideal words here would be “efficient” and “balanced”.

For ordinary mortals with health as the main reason being the interest behind metabolism, the ideal state would be to keep ensuring that a balanced metabolic state is maintained.

Shameem Akthar, yogacharya trained with the Sivananda Yoga Vedanta Center, gives you five practices from yoga that will help you manage your metabolism in peak condition.

Please note: In case of any metabolic imbalance, as well as problems with the thyroid gland, follow the advice of an expert; and do not self-prescribe any practice, including those given below. 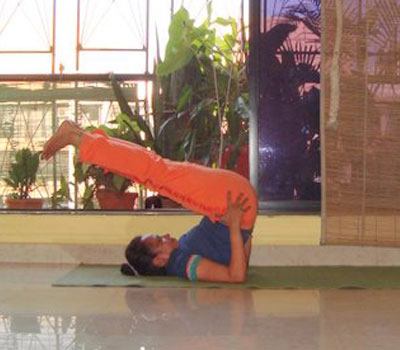 Lie on your back, keeping legs straight out. Arms are straight beside the body, palms flat on ground beside hips. Inhale. Exhaling hoist the hips up, and off the ground. Then raise the palms to support the waist.

Keep legs up in the air, together. Support yourself with palms (later learn to stay up like that without taking the weight on the arms). Continue normal breathing throughout. Hold for a few seconds; build up stamina for a minute over a few weeks. Over a few months, with daily practice you can build up stamina for three minutes or so.

How it affects the metabolism

The pressure at the throat helps to balance the thyroid gland. It is used in both hyper-hypo thyroid, unlike its advanced variation (sarvangasana/shoulderstand) which is contraindicated in hyperthyroidism.

The pressure on parathyroid is also healing and balancing. The blood flow to the brain impacts the major axis of pineal, pituitary and hypothalamus in the brain, further impacting all the other glands and systems engaged with metabolism. The anti-gravity drag on the abdomen helps manage the digestive system too, further enhancing the impact on the metabolism.

It is very calming and thus helps remove stress, which is a major factor in tilting metabolism out of balance. 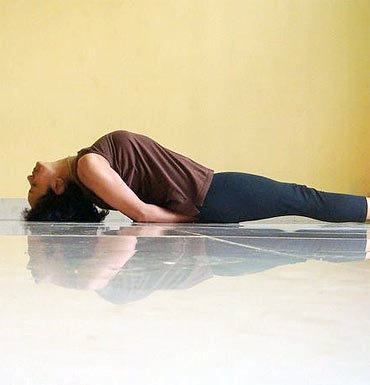 Lie on your back with your palms flat under your hips, bringing the palms close to each other. Raise your head, inhaling to look at your toes. Exhaling, arch your neck and drop the head back on the ground, so either your crown (if flexible) or the back of your head (if you have a beginner’s stiffness at the neck) touches the floor.

Deepen the arch by pushing the chest up, and keeping the entire back engaged. Ensure knees are straight, and legs are together. Hold for a few seconds initially; then work up stamina in the final position to match the duration of the earlier pose (above), so you can hold it for half the length of its time. This is because the fish is the counter pose for the psychic union lock pose.

It has similar benefits to the earlier pose mentioned, because of the pressure on the thyroid. In addition, it impacts the uro-genital system, affecting you with a mild high, which further helps reduce your stress and its negative impact on your metabolism. 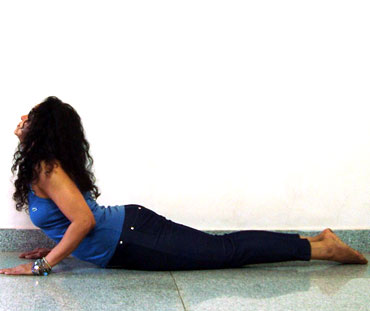 Lie on your stomach, chin down. Palms should be under your shoulder, elbows pointed up and close to the body. Spread out the legs, so they are one-and-half feet apart. Place the feet so either the ankles are rested on the ground, or the toes.

Inhale, raising your chin off the ground. Exhaling, twist to the right, keeping arms straight, and look over the shoulder to your heels.

Ensure your shoulders do not lift up. Inhaling, turn back to the front. Exhaling, drop chin to the ground. Repeat for the left. Do five to ten times.

It has a soothing yet powerful impact along the entire abdomen, affecting the digestive glands and metabolism positively. There is a gentle but firm pressure at the throat too, affecting the thyroid.

The lymphatic ducts along the arm pits are impacted to facilitate effective drainage, plus acupressure points for bliss is activated, removing stress and giving you a high that removes stress.

This further positively brings your metabolism back to a balanced state. A negative mind state is known to throw the metabolism out of kilter. 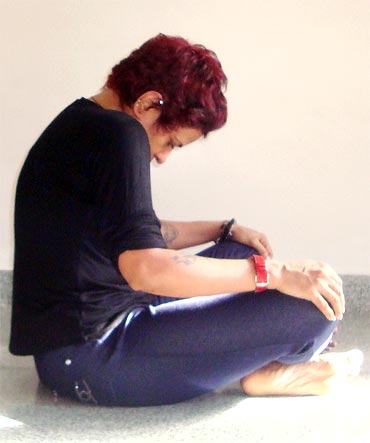 Sit cross-legged (may be done standing too). Place palms flat on thighs/or at knees. Inhale, and exhale a few times. To start practice, inhale deeply, exhale forcefully emptying the stomach completely and tightening it. Flap the stomach muscles in and out vigorously.

Initially as a beginner do only ten times. After daily practice, you may increase it -- from 30 to 100. Once done, relax the body, inhaling deeply. This practice is normally done, with the breath retained.

However, the focus is on the abdominal flapping, and if beginners need to use the breath while doing it, it is allowed.

Practice note: Has to be done ideally early in the morning, after brushing the teeth and always on an empty stomach. Avoid practice in inflammatory conditions of the body or when the weather is too hot.

Tones and powers all the systems dealing with metabolism. The digestive system especially is massaged and toned powerfully. Stress glands are worked out, especially if you curve the back while doing this practice. It can stimulate the mind and relax it also, helping to deal with the psycho-somatic problems that mar metabolic balance.

Sit cross-legged. Place palms on knees or thighs. Inhale deeply. Exhale forcefully, tucking your stomach in. Cave the torso inwards, to intensify the tautness at the abdomen. Draw the chin down to create the chin lock (jalandhara bandha). Hold the stomach for a few seconds. Relax it, inhaling deeply.

Do a few times. Later, this lock may be added to your pranayama practice, with expert guidance.

Practice note and benefits: As for agnisara kriya (described above).