Did you know that one pint of blood can save up to three lives? 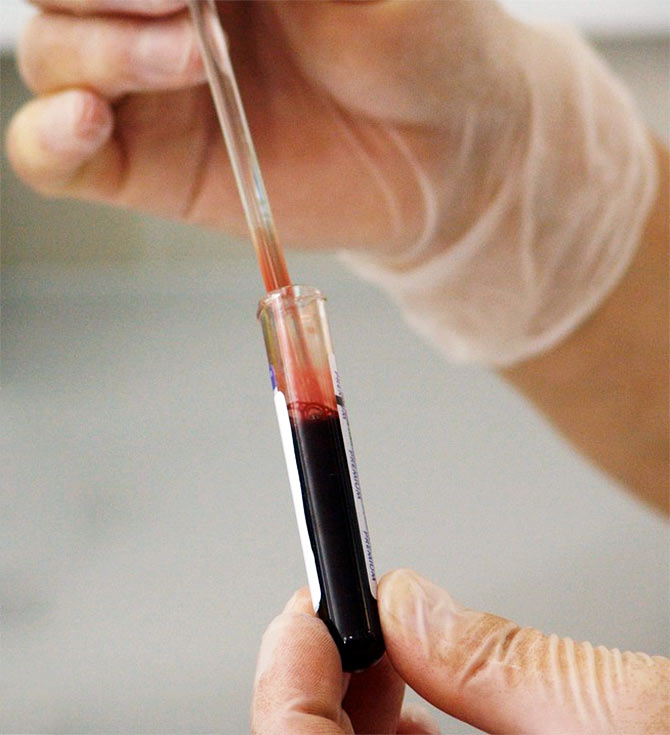 Before you go ahead and make a positive contribution, there are some interesting facts you need to know about this life saver.

For example, did you know that our blood makes for seven per cent of our body weight?

The human blood is actually red and white blood cells floating in a yellow liquid called the 'blood plasma' which is made up of almost 90 per cent of water and takes up 55 per cent of the body volume.

The blood plasma acts mainly as a protein reserve and serves as the primary medium for excretion of carbon dioxide. It also helps transport white blood cells through the body for fighting infection(s).

The red protein content in the blood called haemoglobin is what actually makes the blood red in colour.

Here are some more fascinating facts that'll blow your mind:

1. One pint of blood can save up to three lives

Components of donated whole blood can be bifurcated and administered to patients as per their requirements. For instance, a patient suffering from thrombocytopenia, i.e. low platelet count that hinders blood clotting, needs only additional platelets.

Similarly, the plasma may be required by patients suffering from liver or kidney diseases for assisting appropriate fluid circulation in the body.

The requirement of both these patients can be satisfied from the whole blood of a single donor.

2. There is gold in blood

Your blood contains about 0.2 milligrams of blood that is spread all over the blood stream.

Though it has no nutritional value it is a permitted food additive used in chocolates and liquors in Europe and Switzerland.

Also due to its blood compatibility, gold is used as a medicine to control rheumatoid arthritis.

The red blood cells of blood type 'O' do not have any antigens on their membranes, i.e. virus, bacteria, fungi, and other non-living substances including toxins on their surface. Therefore, they are easily accepted by individuals of all other blood groups.

During emergencies, coconut water can be used for fluid replacement when IV hydration is not available due to its sterility and electrolytes.

5. White blood cells in the sky

Also known as blue-sky sprites, these are white dots which are visible to the eye only for a second and sometimes less.

Especially when you look up into the bright blue sky you see them swirling around in random formations.

These dots are nothing but white blood cells moving in the tiny blood vessels in the eye in front of the retina.

White blood cells are lesser in number than red blood cells and they do not absorb the blue light. Therefore, they create a visual gap in the blood vessels and become visible as tiny dots.

6. White blood cells form only 1 per cent of the total blood volume

It is remarkable how the small percentage of white blood cells makes a great difference to the immune system of an individual.

The increase in the count of these may be in response to infections or bone tumours.

If the rise is on account of a tumour or due to autoimmunity where the white cells do not distinguish between the good and the bad bacteria in the body and attack both.

These cells are made inside the bone marrow and circulate in the body for about 120 days.

They squeeze through the blood vessels delivering oxygen from the lungs to the tissues and also take carbon dioxide back to the lungs for excretion.

During the time of infection, the red blood cells assist the white blood cells by cracking the membranes of the pathogens, instantly killing them.

8. There are about 30 recognised blood types

The familiar 'ABO' system classifies the blood groups into A, B, AB and O categories.

This system is actually based on the pattern of the natural antigens (pathogen and non-living toxins) present on the cell membranes of the red blood cells.

Another known system for blood types is the Rh (short for Rhesus). It deals with 50 antigens the most predominant being the D antigen the presence or absence of which leads to a Rh+ or Rh- blood group classification.

There are over 30 epitopes contained in the D antigen. Variations in this D phenotype, arise when the epitopes are only weakly expressed ("weak D phenotype") or when some are missing ("partial D phenotype").

Donated blood is not only used for blood replacement procedures like blood transfusions but is also used to make medication.

These medications are derived from human blood or frozen blood plasma extracted from blood and are used for treating blood clotting and immunity disorders.

Currently, the cost of technology and raw material (blood and blood plasma) used for creating these medications is extremely high.

Moreover, the multiple safety measures involved in the process also add to the cost. Hence, the number of patients receiving treatment from such medical drugs is small.

It also has to channel through the issues of unrestricted access to raw material and reimbursements, for securing its position into mainstream medication.

There is technology available through which only specific components of the blood may be collected and the remainder may be returned into the body.

This procedure uses centrifugation to separate the component of the blood and extract only what is required.

Blood is passed through an apparatus where the blood cells, platelets, blood plasma, etc. are separated by force. Then the required element(s) are extracted from the apparatus and the remaining blood is returned into the blood stream of the donor simultaneously.

In India, more than 38,000 blood donations are required every day.

A red blood cell transfusion requires about three pints of blood on an average. But as opposed to the 5 crore units of blood required only 80 lakh units are available.

The requirement of blood is ever more among cancer patients as their platelet count drops considerably during chemotherapy.

Apart from the clinical scarcity, a healthy blood flow is required in the human body as it is instrumental in carrying oxygen and food to the tissues while taking impurities away for excretion.

Many psychological and physiological factors contribute to the abnormal blood flow leading to problems of high blood pressure. Also, impurities are ingested into the blood through consumption of alcohol and recreational drugs.

Leading a healthy lifestyle is the only way you can keep blood-related issues at bay.

Blood is precious as it cannot be generated synthetically the only source of blood is that which is generated in the body.

The author Dr Birendra Yadav holds a post graduate diploma in emergency medical services from Symbiosis, Pune and is graduate in Ayurvedic medicine and surgery from Rajeev Gandhi University of Health Sciences Bangalore.