This Dior show has a hidden message for women

Read on to find out what it was. 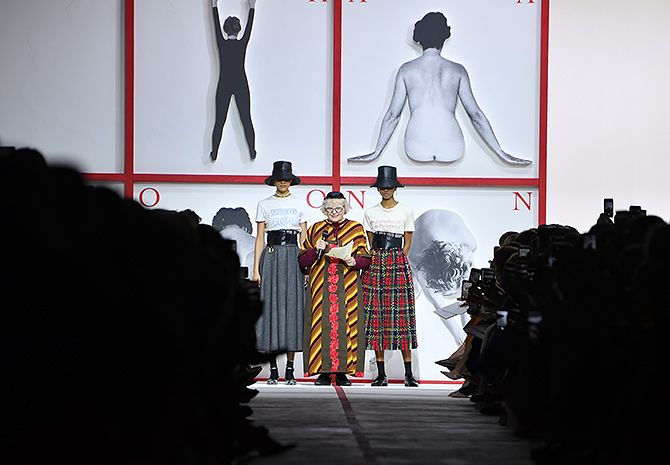 Dior's Maria Grazia Chiuri has championed feminism ever since she became the first female creative director of the famed French fashion house Dior in 2016.

This held true ever for her showcasing at the fall 2019 Paris Fashion Week.

Her show at the Musee Rodin opened with 88-year-old artiste Bianca Pucciarelli Menna reading a poem in Italian that spoke of a time when women would reign victorious over male governance in society, revealed The Hollywood Reporter.

Pucciarelli who worked under the male pseudonym Tomaso Binga in the art world of the 1970s.

In the background, there were photographs taken by the artiste of her naked body in letter-like poses spelling out 'Dior' and the words to one of her poems.

Taking to Instagram, Dior posted, 'Be among the first to see how the Autumn-Winter 2019-2020 show by #MariaGraziaChiuri draws on the ABCs. Each letter represents a different woman, forming a poem made of an alphabet by the Italian artist Tomaso Binga, a woman who chose a masculine pseudonym to parody the privileges reserved to men alone. #DiorAW19 © @AdrienDirand.' 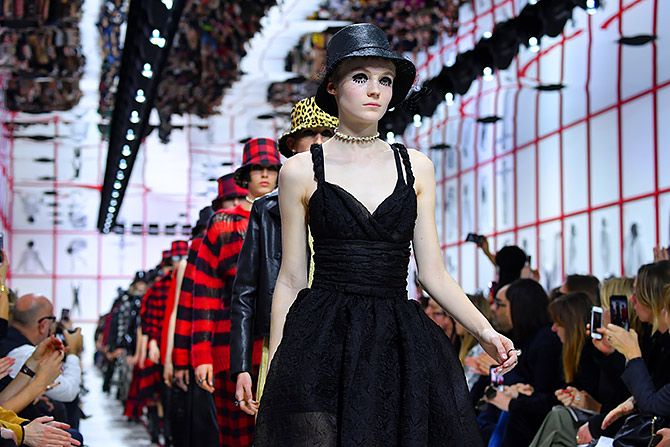 They referenced her three anthologies: Sisterhood is Powerful in 1970 (said to have helped spark the feminist movement in America), Sisterhood is Global in 1984, and Sisterhood is Forever in 2003.

According to show notes, 'The queens of a ravaged landscape, Teddy Girls were impertinent characters with wild quiffs who wore Edwardian-style men's jackets with velvet scarves, ample skirts, jeans and black leather jackets.'

Models donned heavy eyeliner (favored by Teddy Girls and the designer herself), cat eye sunglasses, plaid kitten-heel booties and the delightful bucket hats by British milliner Stephen Jones -- a solution to not worrying too much about one's hair as they walked the runway in pants and bar jackets by day and switch out with a tulle embroidered skirt for evening.

Denims were elevated into a pleated skirts. 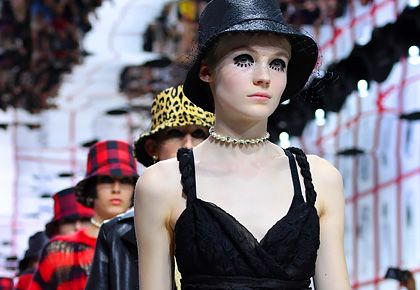