Don't miss: Everything you need to know about Lakme Fashion Week Winter/Festive 2017

His showings at the Paris Fashion Week, one of the big four along with New York, London and Milan, have turned the designer's name into a global phenomenon, and Manish Arora told the media, 'I am delighted to celebrate the 10th anniversary of my Paris collection Cosmic Love by showcasing it during Lakmé Fashion Week.'

He added, 'Having spent 10 years of my working life in Paris after launching my career in Delhi, I have drawn much inspiration from my travels to the work I create. The line I am bringing to Mumbai is inspired by the tribes of Africa and outer reaches of the cosmos.'

He experimented with a variety of fabrics, including denim, organza, boiled wool, raw plastic, velvet, twill, crêpe and Dupion. And as always, hit us with a colour blast.

Scroll down and prepare to be amazed. ... And then onto the cosmos with flaming comets and whirling planets in orbits that appeared on the ensembles. The creations were a visual interplay of colours (mostly based on mustard, tangerine, midnight blue, violet, fuchsia and royal blue), styles, intricate silhouettes and designs. Detailing has always been Manish Arora's fortè, and his velvet appliqués, optical illusion peacock embellishments in gleaming gold and green, and Swarovski crystal paisleys showed us exactly why. The collection was shown off by 40 models who moved up and down escalators... ... Because when it comes to a Manish Arora show, no ordinary venue is good enough. But the massive atrium of Mumbai's Palladium Mall came close. Manish Arora believes India is no longer an understated country when it comes to fashion sense, which is why he chose to bring his Paris collection to LFW.
He told IANS, 'I actually like to make everything one now because there is no need to separate India. India is no more a market where you have to separate it because the customer is as global as in China or Middle East or Europe. It's the right time to include India in the part of a global plan.' 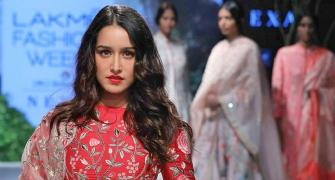 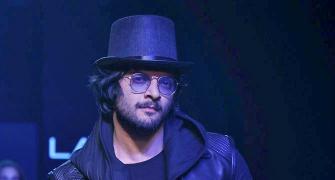 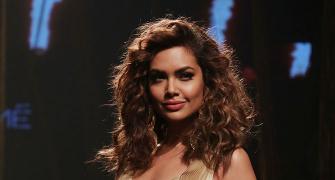 Esha Gupta is too HOT to handle 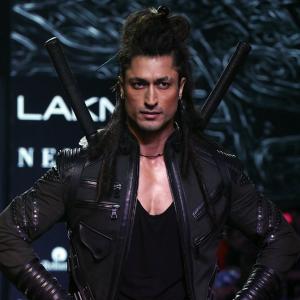 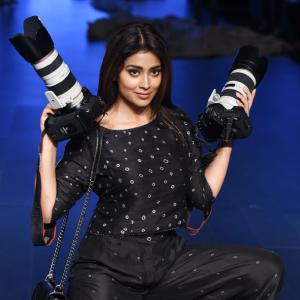 Swoon! Look at what Shriya did with our cameras