Never mind Kate Middleton's Marilyn Monroe moment, the Duchess of Cambridge didn't fail to impress on Day Two of the India tour. She lived up to being a true inspiration to style watchers world over!

Read on to find out more about the outfits.

After her day out in the sun, playing cricket with a printed dress and wedges, Kate started Day Two of her India tour with a lovely wool crepe white dress by London-based fashion designer Emilia Wickstead. The royal couple were the guests of honour at a gathering of young entrepreneurs.

Later in the evening, for a party in honour of the Queen's 90th birthday, Kate chose a monochromatic crop top in nude and black with geometric prints, and a matching maxi skirt by British designer Alice Temperley. The outfit cost around £ 2,535 (that's around Rs 2 40, 972).

Take a look at the two outfits that Kate wore on Day Two of the India tour! 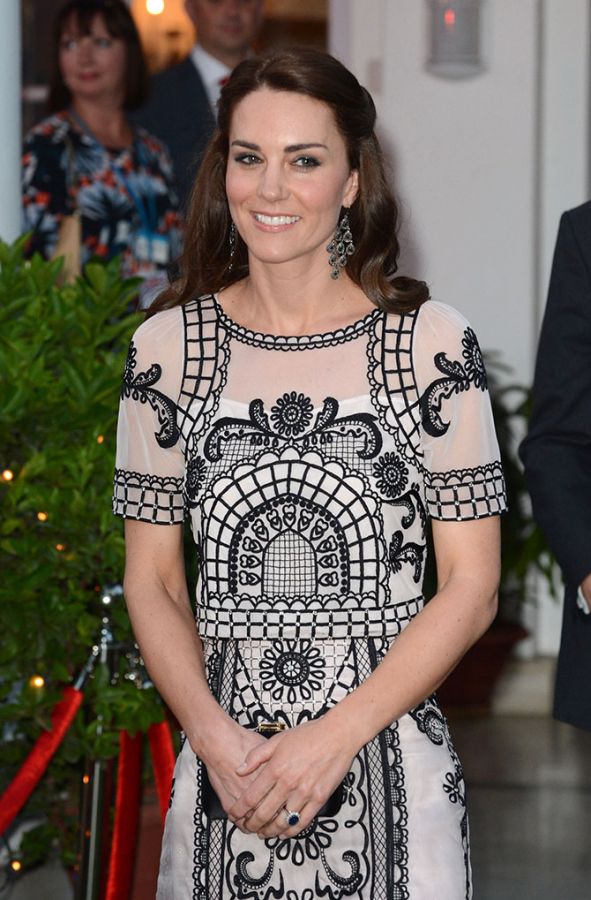 Image: At the party in honour of the Queen's 90th birthday, Kate looked like a dream in this Alice Temperley outfit, which had contrasting black embroidery and crystal embellishments. Photograph: Mark Large - Pool/Getty Images 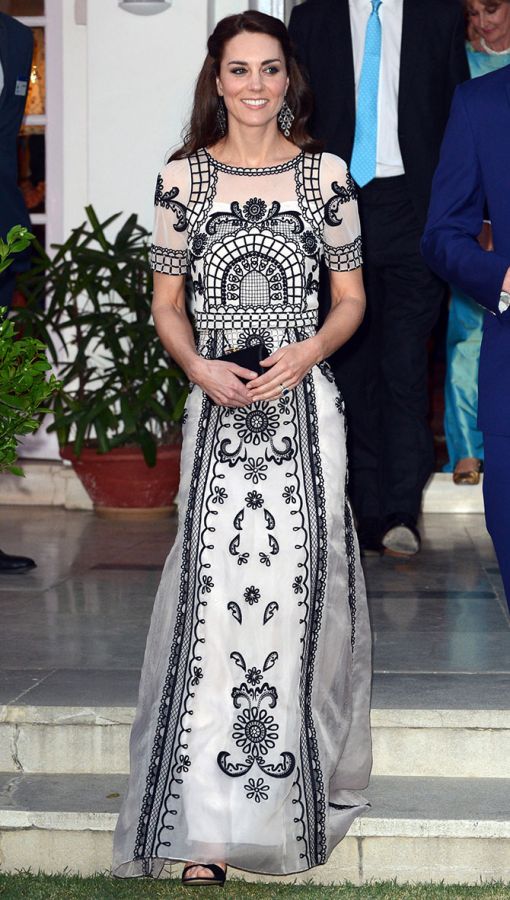 Image: She teamed it with chandelier earrings, and matching black heels. Kate barely looks like a mother of two, does she? The secret to her svelte figure, she revealed at the party, was 'running around after her children'. Photograph: Mark Large - Pool/Getty Images 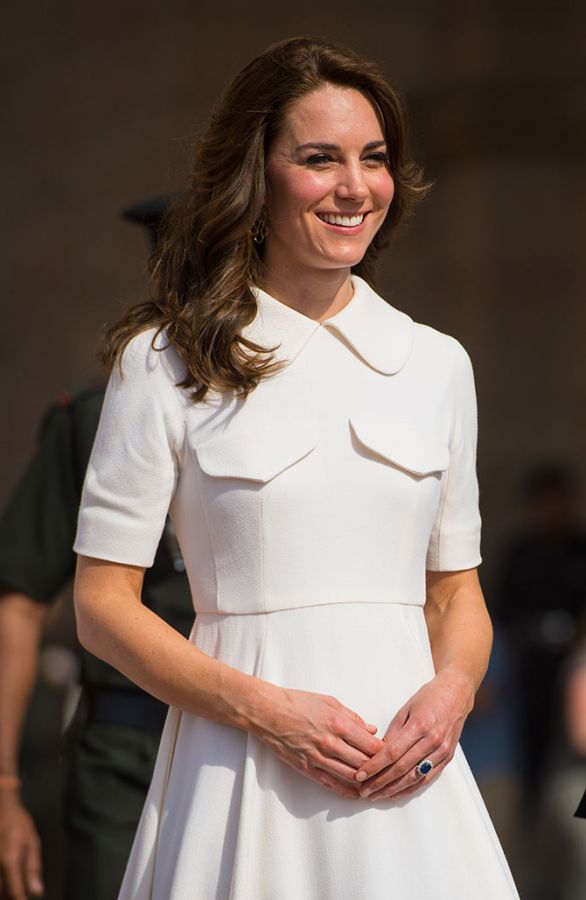 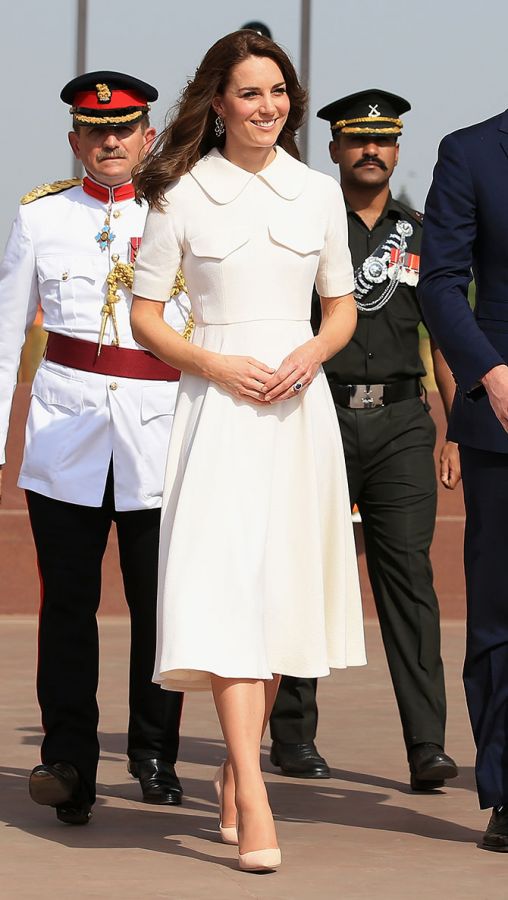 Image: This is not the first time that Kate chose to wear an outfit by Emilia Wickstead. Earlier during her tour to Australia and New Zealand, the Duchess of Cambridge had worn a pleated teal dress by the same designer. Photograph: Chris Jackson/Getty Images 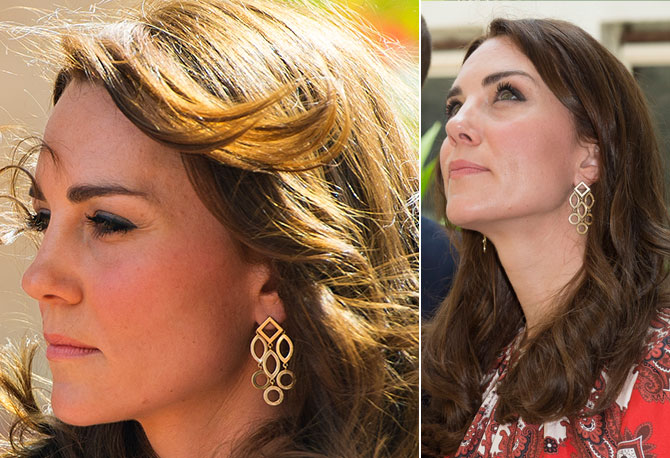 Image: Kate matched her white dress with the high-street earring which she had worn on Day One of the India tour with the red paisley print peplum dress (right). It's not the first time that Kate has recycled her outfits. She seems to be closely following Michele Obama's footsteps. Photograph: Dominic Lipinski - Pool/Getty Images

And while she set the bar high with her style, Kate almost had a wardrobe malfunction on Day Two. 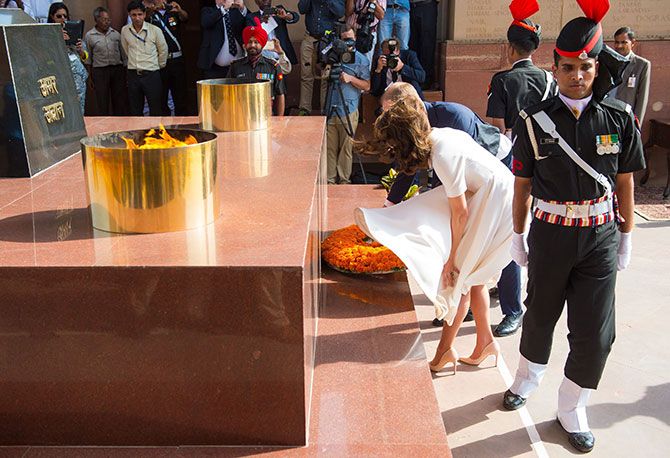 Image: At India Gate, Kate's dress kept blowing up due to the wind. But, she looked pretty composed and eventually managed to hold on to the dress.  Photograph: Dominic Lipinski - Pool/Getty Images

But this pic did take us back in time to Prince William and Kate Middleton's Royal tour to New Zealand. 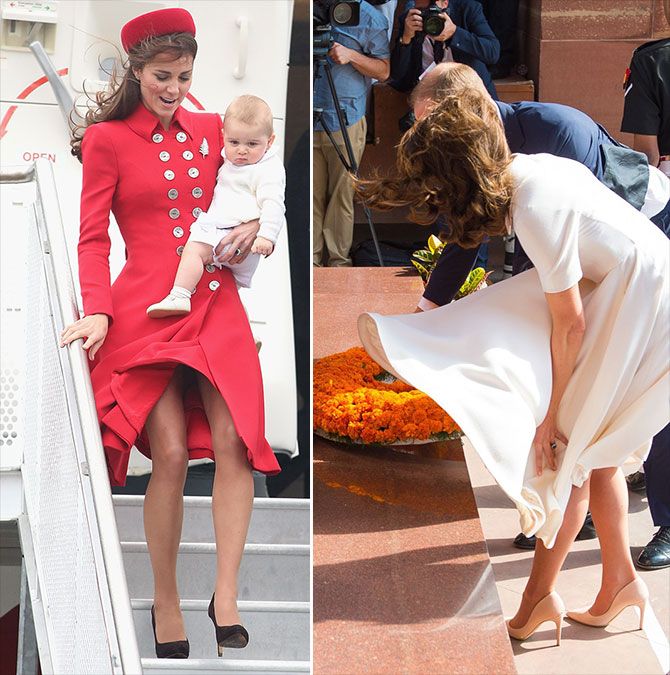 Image: (left) When stepping out of the flight, on they arrival to New Zealand in 2014, Kate had a similar moment. Carrying Prince George in her arms, Kate struggled to manage her red dress, when a gust of wind lifted her dress up in the air. Photograph: Chris Jackson/Getty Images