Adriana Lima retires from the ramp

After walking the Victoria's Secret ramp for 19 years, the Brazilian model walked her last show. She first walked the Victoria's Secret ramp in 1999.

Since then, 37-year-old Adriana Lima has been making her mark on the VS ramp year after year.

This year as she walked the runway during the annual extravaganza, Adriana confirmed that this will be her final walk. She holds the title of the longest standing angel.

Dressed in an embellished lingerie, the model sported feathered wings, below, as she walked her last season. The 37-year-old is a mother-of-two. Photograph: Thomas Concordia/Getty Images

Tears streaming down her face, she thanked the crowd, before closing the show.

Overwhelmed by her reaction, the crowd gave her a standing ovation. For her second act, the model slipped into a black lace leotard with a moon shaped wing and stars on her boots. Photograph: Thomas Concordia/Getty Images

'Dear Victoria, thank you for showing me the world, sharing your secrets, and most importantly not just giving me wings but teaching me to fly. And all the love to the best fans in the world. Love, Adriana,' Adriana wrote on Instagram as she bid farewell to the lingerie brand. 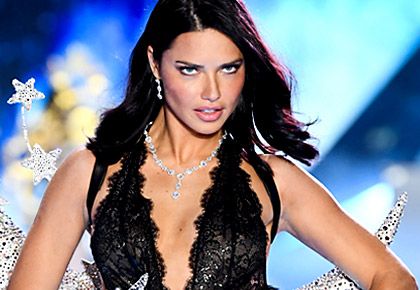