Jio announces an array of communication and entertainment devices. Ashish Narsale brings you the lowdown. It runs on KAI OS, a Linux-based mobile operating system.

A QWERTY keyboard phone with a horizontal screen, it resembles the BlackBerry and Nokia QWERTY phones.

Other than the keyboard, the phone also has four-way navigation keys and a dedicated voice command key.

Multimedia can be enjoyed on a horizontal 2.4 QVGA display.

The Phone 2 has 512 MB of RAM and 4GB onboard storage, which can be further expanded to 128 GB by inserting an SD card in the slot provided.

It has 2 MP cameras at the front and back.

Other than these features, it has built in FM, Bluetooth, WI-FI, GPS and NFC.

Existing Jio Phone users are at an advantage; they can exchange their old Jio Phone for the new one for just ₹501 under the company's Monsoon Hungama offer starting on July 21.

Interestingly, the old Jio Phone will also get an update, allowing users to enjoy YouTube, Facebook and WhatsApp on their phone starting August 15. 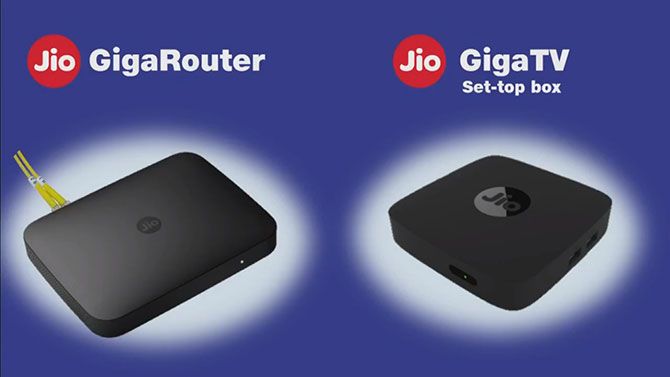 The Jio Giga Fiber brings the Jio GigaRouter which will connect to the Jio GigaTV set-top box and Jio smart home solutions devices.

The Router will provide internet speed in giga bits per seconds, which in turn will allow users to use Jio GigaTV set-top box to stream rich content and 600 TV channels at up to 4k resolution on their existing TV sets.

The Jio GigaTV set-top box is enabled with voice command through a set-top box remote, which will also support multiple Indian languages.

Using the giga speed, the Jio GigaTV set-top box will also allow TV calling. This is not limited to television sets connected to Jio GigaFiber; you can call any mobile phone or tablet across any network.

To get the Jio Giga Fiber service, users can register through the My Jio app or the Jio website starting August 15.

The service will be rolled out on a priority basis depending on the number of registrations from a particular locality.