With Samsung Galaxy S8+, another phablet with screen size north of 6 inches, slated to release with a price tag of Rs 65,000, the Samsung Galaxy C9 Pro is not half bad an option costing only Rs 36,990 in comparison, says Himanshu Juneja 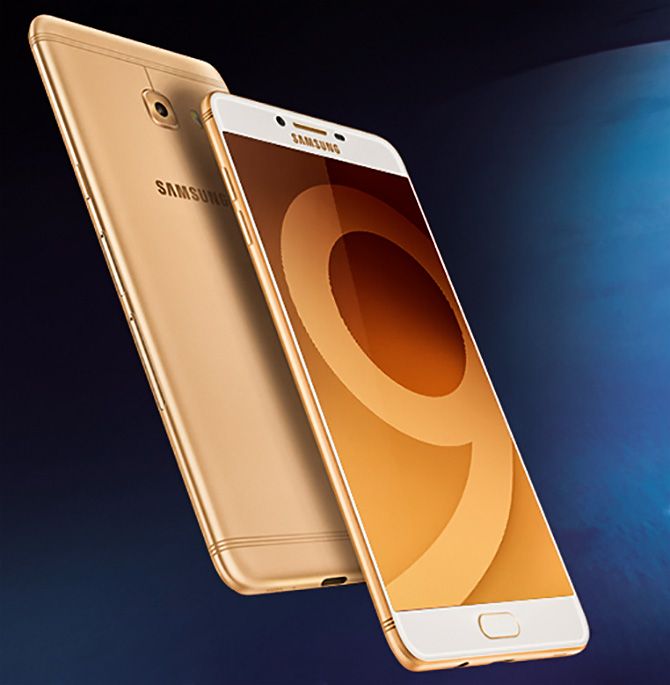 The Samsung Galaxy C9 Pro was released alongside the statement that Samsung will focus on large screened handsets in India. While the regular-sized handset still has more than sizable fans, the move seemed clearly an attempt to take back the reigns from the Chinese phone makers who have changed the mobile phone landscape since the past few years.

It is considered worthy that the C9 Pro can also act as an option for those who originally intended to pickup the now defunct Note 7. Samsung had a tumultuous last year, and this seems a calculated step to kill two birds with one stone.

Samsung has to be careful still. For their 'Galaxy of Phones' concept has the inherent danger of cannibalising other Samsung phones.

The C9 Pro though has the distinct advantage of coming with a six-inch display panel, while maintaining the distance from the upcoming Samsung Galaxy S8 Plus. But how good is the phablet on other aspects, and more importantly, how well is it equipped to tackle the competition?

We try to find the answers by digging deep.

The Galaxy C9 Pro impresses the moment it comes out of the box. The metal unibody phone has been given a matte finish. The texture along with rounded corners, and chamfered edges combine nicely to aid gripping on this classy looking phablet.

As a cherry on the top, it is a lot slimmer than what is expected out of a phablet.

The story continues at the back panel as well, where the triple bands for antenna look way cooler than anything seen till now. The handset is slimmer than Galaxy S7 Edge, and not much bigger than an iPhone 7 Plus, while carrying a much bigger screen.

The traditional home button at the front has a finger print scanner embedded in it, and user need not press it for the scanning.

On the bottom edge one finds the headphone jack, the speaker grille, and the USB Type C connector. The right edge carries the power button, the microSD card slot, and the slot for the two SIM cards.

Samsung did well by opting out of a hybrid slim slot here.

The left edge hosts the volume buttons, which have been placed on the higher side. Samsung could have placed all the buttons on a single side, while moving the card slots on another, preventing any accidental pressing of the buttons.

Apart from this gripe, the handset really is a looker and exudes a solid feel when held in the hand. It is a big phone, and single handed operation is going to be a task. The phablet comes with a six-inch Super AMOLED panel, complete with gorilla glass protection and full HD (1920x1080p) resolution. The lack of Quad HD may put some prospective buyers off, but it seems a case of a trade off.

While the pixel density of 367 ppi is perfectly acceptable, the battery performance can be expected to be better due to absence of a Quad HD panel.

The images looked sharp, and the Super AMOLED panel ensured deep blacks and saturated colours. Users get the option to shift to a more basic mode to view the accurate colours as well.

The display is pretty bright, and viewing it under direct sunlight does not pose any issue. We get the 'always on' display, a blue light filter for those prolonged reading sessions, all this while the viewing angles were acceptable for most part, leaving very less to complain about.

A healthy dose of 6 GB of RAM, Adreno 510 as the GPU, and we can say that there is no dearth of power underneath the hood.

Storage space of 64GB has been provided, while the microSD card slot accepts 256 GB cards at the most.

The Galaxy C9 Pro is a dual SIM handset, and supports 4G and VoLTE technology. Apart from these, there are the other expected norms like Bluetooth (ver 4.2), Wi-Fi (802.11 a/b/g/n/ac), GPS with GLONASS. NFC chip is onboard as well.

Providing USB Type C is a good way to ensure future proofing, while FM radio's inclusion should bring more sheen to the resume.

Galaxy C9 Pro comes running on the Android Marshmallow (ver 6.0.1), with Samsung's Touchwiz skin slapped on top. Things look impressive, but Nougat was very much expected here. An announcement about the same would be wonderful.

Samsung still has a thing for the app drawer, and frankly it was a wonderful thing to see an old friend. The notification shade has gone slimmer, with more options now resting on the side panels.

The flipboard is still there, and still located on the leftmost pane. Users get a curated feed, but can disable the feature in case they have no need for it.

Samsung has included theming option, and tried to include some useful features, while some bloatware still persists.

The app monitor puts the dormant apps to sleep and tries to optimise the system for performance. Smart alert makes the phone vibrate when picked up to notify about the unattended notification.

One can flip the phone over to trigger mute feature. User can also cover the phone with the hand to achieve the same.

While this is old school Samsung, one can now initiate phone call to the number on the screen by holding it next to the ear.

Single hand mode should be one of the favourite with the users in the longer run. There is also a Game mode and keeps the intrusive notifications at bay while the gaming session is on.

It also disables keys, and allows for video or still grabs to take place, should the user desire so.

The bloat is there in the form of intrusive Opera Max, or the entire Microsoft set of apps.

Samsung also gambled with few features like shrinking apps to deal with notifications, swipe palm for screenshots while perfectly having button combos for the job already.

Samsung has toned down Touchwiz, but should hold itself further back.

While Touchwiz will require few more iterations to be perfect, supplying 6 GB of RAM along with a Quad Core SoC is another way of boosting performance. Apart from getting warm, the C9 Pro barely showed any hiccups.

Be it firing up multiple apps, or playing the HD content, there were no notable issues. Even the split window tasks went by without exhibiting any problems.

Everything is not happy dandy here though. The fingerprint scanner is not the fastest around, and it did fumble a bit at times. Hopefully a software update will fix this up. What unfortunately cannot be said similarly for, is the speaker system.

Don't get us wrong, the sound is loud and clear even at the top volumes, it is the execution which is not polished. The dual speaker system has the earpiece acting as the tweeter, while the bottom speaker is the sub woofer.

Problem is, that the sound is not convincing, and God forbids if the user covers up the bottom speaker in the landscape mode, the whole scheme of things loses the plot.

Sound just gets lost when that happens, making the experience pretty washed out.

Thankfully, users can switch to mono speaker mode, and it handles the tasks much more assuringly.

With a non Quad HD panel to be powered up, a non replaceable 4000 mAh battery sounds like a good option for the C9 Pro. And indeed, the handset was able to last more than a day on a single charge, while being used on a moderate to heavy usage pattern.

There is the Quick Charge 2.0 support, ensuring that the battery is juiced up from 0 to 100 per cent within an hour and a half. But the handset did get pretty warmed up with all the quick charging action.

The rear camera is a 16MP unit with f/1.9 aperture, comes with Phase Detection Autofocus, and has a dual tone LED flash.

The front snapper is also 16MP with f/1.9 aperture. The missing Optical Image Stabilisation was a surprise.

One can double press the home button to launch the camera app quickly. The snaps taken during the daytime packed good details and the colour reproduction was perfectly good too.

Night time photography was more inclined to include grains, but the users can make use of the night mode, which cleans up the final results to a decent level.

That said, a stronger camera performance would have provided a massive shot in the arm for the C9 Pro. We have non-phablet options lurking around and the competition demands refined performance in crucial areas now more than ever.

There is a Pro mode included, but peculiarly, neither is there the focus adjustment, nor the shutter speed alteration possible. This was disappointing.

Thankfully, HDR is reliable and can be summoned for better results whenever required. The handset can grab 1080p videos tops, and thankfully, there was no dearth of details.

Colour reproduction again was spot on, but the lack of OIS was felt. Just the few things which could have made the camera a strong suite. A missed opportunity no doubt.

The front snapper does its job convincingly, even during low light conditions.

There is no doubt that C9 Pro has inherited few features from, and may well have been introduced to fill the vacuum of the ill-fated, Note 7. It does carry some of its own strong features too.

A very impressive display, fulfilling OS performance, a capable camera, and the reliable battery back up, it ticks all the boxes.

The competition has gone stiffer, and some may argue that OnePlus 3T is more well rounded off, but anybody looking forward to laying their hands on a 6" screened phablet, backed strongly by brand Samsung need not look any further.

With Samsung Galaxy S8+, another phablet with screen size north of 6 inches, slated to release with a price tag of Rs 65,000, the Samsung Galaxy C9 Pro is not half bad an option costing only Rs 36,990 in comparison.

Having said that, Samsung should aggressively back this premium looking device, and bring in the much needed software updates soon. A slight price adjustment surely won't hurt the chances here one bit.