Final Fantasy XV Review: Is it worth the 10-year wait?

Final Fantasy XV features a real-time combat system, instead of the turn-based one the Final Fantasy series is known for, which makes the game more fun. But after putting in close to 17 hours into it, Kakoli Chakraborty clearly sees the shortcomings. 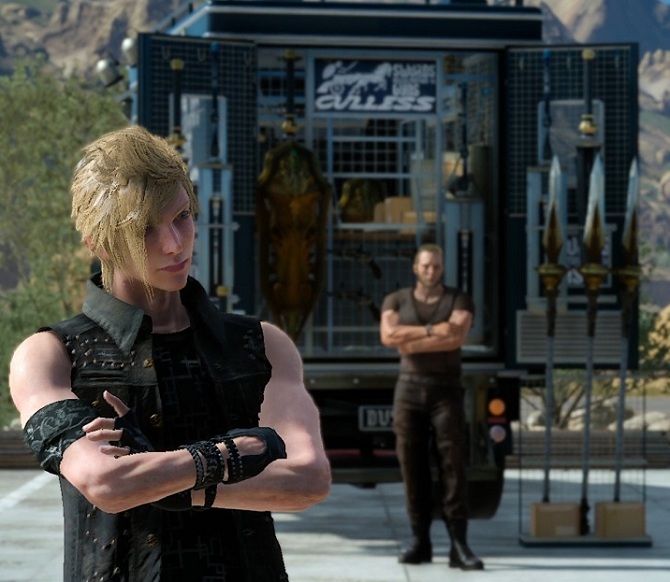 IMAGE: Final Fantasy XV gives you more freedom than the previous games of the franchise.

Only a handful of video game franchises can invoke nostalgia. Final Fantasy is one of them.

The video game series, which began in 1987, came out with its 15th instalment in late 2016. Available for both PlayStation 4 and Xbox One, I got my hands on the PS4 version of it. Having played every instalment in the series, I was excited to see what XV had in store, especially since it was in development since 2006.

Developed by Square Enix, Final Fantasy XV revolves around Noctis Lucis Caelum, the crown prince of Lucis and his quest to free his land from the clutches of Niflheim. He is joined by three of his friends -- Gladiolus, Ignis and Prompto.

The story opens with the four friends travelling to Altissia for Noctis's wedding, but the breakdown of their car, Regalia, delays them temporarily. One has to get the car fixed in order to progress.

This instalment of Final Fantasy gives you more freedom than the previous games of the franchise. You can go on side quests, cook, fish and even work on your photography skills. Much like Skyrim, I found myself trying to unlock the map instead of focussing on the main storyline.

Final Fantasy XV features a real-time combat system, instead of the turn-based one the Final Fantasy series is known for. Sure, it makes the game more fun, but after putting in close to 17 hours before writing this review, the shortcomings were more than clear.

The worst of all is the combat camera, which more often than not gets stuck.

The combat mechanics could have been better.

The Final Fantasy series is known for its "summon" spells for being extremely powerful and mesmerising. But my experience with them was disappointing.

First, you get them much later in the game and then you can't use it when you like. So, what should have been a combat laced with magic and melee, gets reduced to a plain melee combat.

The open world is picturesque and breathtakingly beautiful. Side quests are interesting, especially cooking at a campsite and more than anything else, the game manages to portray the camaraderie shared by the four main characters with the help of witty, affectionate banter.

It does have its shortcomings which stick out a like a sore thumb. Though it provides you with a fun experience, it definitely isn't worth the decade-long wait.