OMG! The Bahubali thali is real

Served at Rajwadu, in Ahmedbad, the thali is inspired from the fights of Baahubali. 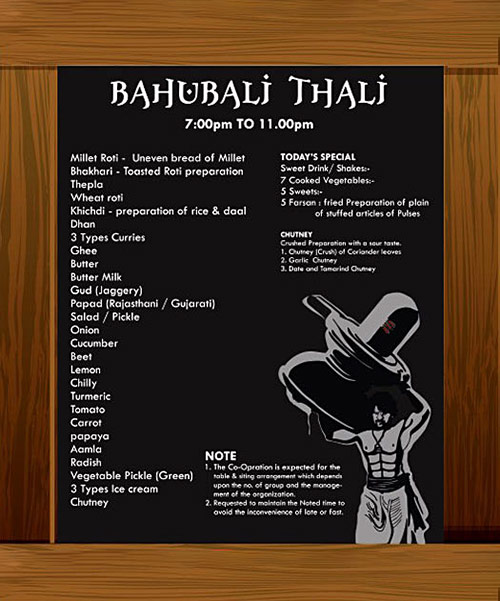 IMAGE: An alleged snapshot of the Baahubali thali menu is doing the rounds on the Internet.

Baahubali, on screen, have treated your eyes well.

Now, a thali of the same name is all set to treat the foodie in you.

A hotel in Ahmedabad, Rajwadu, has introduced 'Baahubali thali', as their tribute to the film.

Rajesh Patel and Manish Patel, owners of Rajwadu, decided on doing something to justify the legacy of Baahubali. And what better than a thali, dedicated to Baahubali, depicting the grandness of the franchise!

The Thali is a spread of their best delights and has a war of flavours, inspired from the fights of Baahubali.

Rajwadu is known for its village-themed ambience, surrounded by greens, which serve authentic Gujarati and Rajasthani food.

The owners of Rajwadu share, "We, at Rajwadu, are sure of a stirring success of the second franchise of Baahubali at the Box Office and look forward to hosting the team at Rajwadu."

Baahubali: The Conclusion is slated to release on April 28.