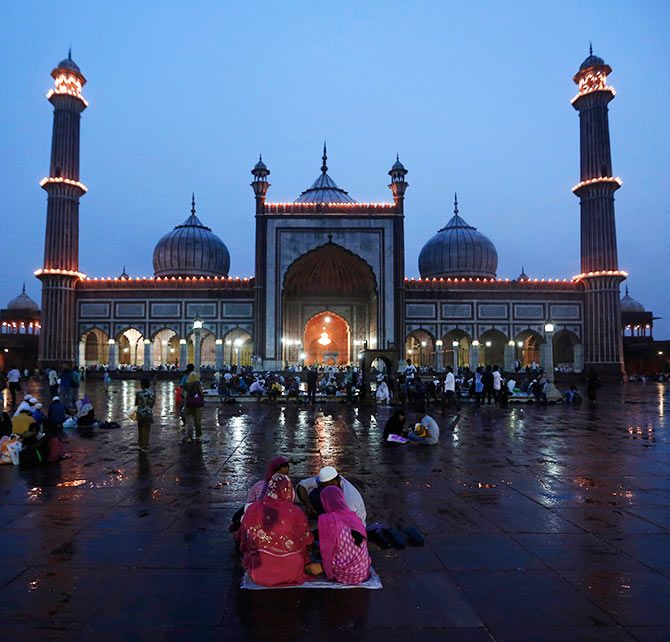 A Muslim family have their iftar (breaking of fast) meal on the last day of the holy fasting month of Ramzan in India, at the Jama Masjid (Grand Mosque) in the old quarters of Delhi. Photograph: Adnan Abidi/Reuters

Old Delhi's narrow alleys are full of stories, especially the culinary kind that have been passed down over generations dating back to the Mughal period.

Over the recent years many individuals, explorers and tour guides have attempted to navigate the narrow bustling lanes of the Walled City through a series of walks centered around food.

Some of the walks take visitors down the maze like streets of the old city for 'Iftar', the evening feast in Ramzan besides offering a midnight experience to participate in 'Sehri', a feast Muslims partake of before dawn and the beginning of their Roza (fast).

During the month of Ramzan, Muslims observe fast from dawn to dusk, without having food or water.

"Our basic motive behind organising these food walks is to promote cultural harmony. Through this people get to know about traditions and cultural practices of other religions and regions," says Abhinav Sapra, Founder, Delhi Food Walks, who conducts a Ramzan food walk.

"With 'Ramzan food walk' we are trying to explore the food being specifically served during Ramzan by some extremely talented street food shops in old Delhi," says Sapra.

Starting off from Chawri Bazaar a caravan of 30-odd people mostly first timers to the place walk around reaching the magnificent Jama Masjid almost at Iftaar time.

After a siren that indicates the time to break the fast walkers are treated to delicious 'keema samosa', a special item for Ramzan, juicy chicken shami kabab, crispy buff balls and paneer jalebi, a delicacy much favoured during the Ramzan period. 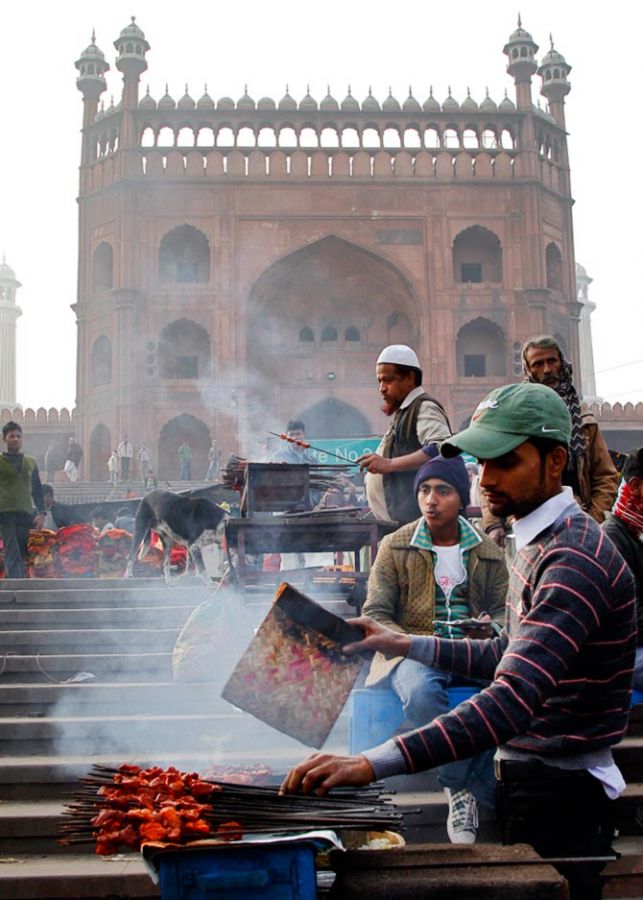 Vendors roast mutton outside the Jama Masjid (Grand Mosque) in the old quarters of Delhi. Photograph: B Mathur/Reuters

"I have attended many food walks before, but the taste old Delhi offers cannot be compared with anything else. I have never tried such buff balls and sheekh kabas before," says Paulami a foodie in the group of walkers.

Before the taste buds have a chance to settle down the walkers are offered exquisite chicken Tikka, at Aslam Chicken corner. Simmered in gravy and loaded in butter, they literally melt in mouth.

After a while walkers find themselves following the aroma of "kewara" (flowers of pandanus), and the third destination stop offers walkers the "Dilpasand Biryani".

The "Mirch masala Buff Biryani" is cooked with different marination. Walking a few steps ahead the next stop "Haji Shabrati Nihaari Wale" offers one of the most authentic Nihaari (slow cooked buff) in town with hot kameeri rotis coming off tandoor.

"This is the first time I've tried Nihaari that to at such an authentic place. It is an immense culinary delight, " says Aakshi Jiarath, one of the participants in the walk.

With almost full bellies the group move towards the Changezi Chicken wala in Chudiwala street. The chicken is offered in beautifully garnished gravy with coriander that tastes best with a squeeze of lemon.

A food cart belonging to Nawab Quereshi offers "Pyar Mohabbat Maza" a refreshing drink that is a unique blend of milk, Roohafza and tiny cubes of watermelon.

"We wanted to give an interesting and attractive name to our drink and came up with this," says Quereshi.

Further up is the "Cool-Point" shop which hawks desserts of Ramzan. Firni, Kulfi Falooda, badaam milk, sweet samosa and most popular "Shahi Tukda" made up of bread, sheera (sugar syrup) and khoya (condensed milk) are offered.

The last and final point for the walking group is the ""Khuloos", a shop near Jama Masjid that offers 350 creative varieties of dates.

"We have total 350 varieties of khajoor (date) including Choco dates, those dipped in chocolate, an energy boat date that is made up of dates, honey, pista, fig and chocolate, a Pan (beetel) flavoured date and dates seasoned with apricot," says Adnaan Pasha the shop's owner.

Divided into two parts -- the Sehri dawn walk and the Iftaar dusk walk -- the walks are scheduled to be held till July 12.