Martinis, with a slice of Bond

Agent 007's martini, famously shaken, not stirred, is up for some innovative twists. Flavour it with a hint of Scotch or replace the olive with an orange peel. 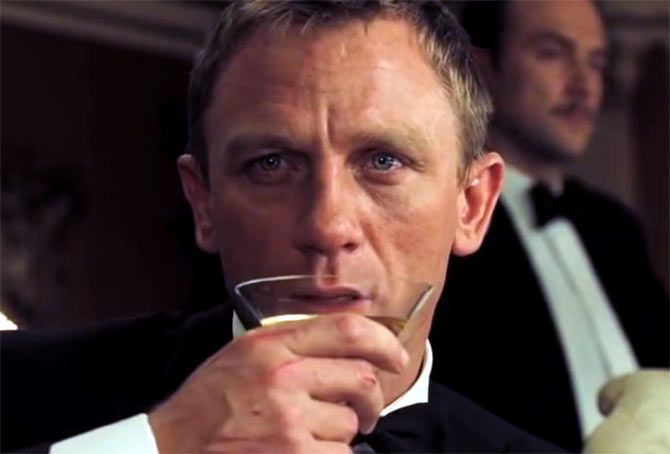 Image: A still from the movie Casino Royale

For all of us who've grown up watching James Bond films, the British spy's obsessive drinking habits have always been a matter of fascination. In December 2013, doctors were quoted in the British Medical Journal as saying that they appreciated the societal pressures to consume alcohol when working with international terrorists and high stakes gamblers, but they would advice Bond to be referred for further assessment of his alcohol intake. Some doctors went as far as saying that the British spy was not the ideal man to trust with deactivating a nuclear bomb.

But then, without the glass in hand, Bond would not be the suave, somewhat impetuous, secret agent we know him to be. The man loves his drink and none more than his favourite -- the Vesper Martini. First mentioned by Ian Fleming in the 1953 novel Casino Royale, Agent 007's favoured drink over the years has become an integral part of everything that is Bond.

After controversially guzzling a pint of Heineken in 2012's Skyfall, the new Bond film, Spectre, will see Daniel Craig -- who will be reprising his role as Bond -- going back to his signature drink. Polish luxury vodka brand Belvedere has tied up with the producers of Bond, and has released two custom-made, limited edition 007 vodka bottles.

The original Vesper was made by mixing three measures of Gordon's gin, one of vodka and half a measure of Kina Lillet. The cocktail is generally rounded up with a large, thin slice of lemon. With Gordon's gin reformulated since 1953 and Kina Lillet no longer available, substitutes are used to prepare the drink. Belvedere has updated the traditional recipe and the company's new version of the cocktail is called the Reverse Vesper. The modified recipe contains 60 ml of vodka, instead of the conventional 30 ml.

"The Vesper is the cocktail most associated with Bond, and his precise recipe gives an indication of his preferences and for a cocktail to be 'well made and very cold'," says Claire Smith, head of spirit creation and mixology at Belvedere.

So what makes the Bond Martini so special? According to Shatbhi Basu, author and head of Stir, a professional bartending institute, it was Fleming's imagery around the Bond Martini that created a new cult, moving away from the purist's view of the classic martini that is made with gin. Martini made with vodka -- shaken not stirred, though blasphemous for the true connoisseur -- opened up a brand new and much bigger group of vodka drinkers to the idea of this icy cold, potent yet silky smooth libation. "It made them feel stylish, elegant and savvy, just like Bond himself," says Basu.

Basu often experiments with the Bond martini, coming up with quirky variants. One of her favourites is the Casino Royale -- made using a hint of blue curacao instead of vermouth and an orange peel in place of the olive. The Goldfinger is another interesting variant. It is flavoured with a hint of scotch using a dark chocolate stick. The Bulls-eyes martini has a dash of mint liqueur or anise with a Bulls-Eyes candy thrown in. The innovations to the Bond martini, says Basu, are endless.

Bond is indeed a drinker -- scotch, beer, champagne. But ever since Sean Connery ordered a dry martini in the 1964 film Goldfinger, martini is the only drink that Bond has been associated with, discounting Craig's infamous betrayal with beer.

"007 is intelligent, intuitive, always ahead of the competition. The cocktail is the perfect drink for him," says Basu. Spectre will be here soon, so expect 2015 to be the second coming of the Bond martini.