This restaurant channels the spirit of laidback Goa in the heart of frenetic Mumbai, says Avantika Bhuyan. 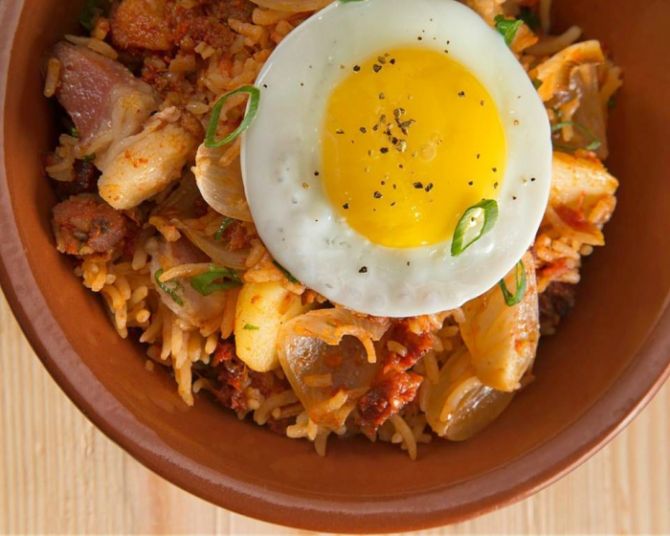 Chef Floyd Cardoz brings his Goan heritage and heirloom recipes to the table in the form of dishes like the Margao choriz and bacon pulao.
Photograph: @opedromumbai/Facebook.

The warm sun-kissed interiors of O Pedro are a relief after the glare of the steel-and-glass facades that tower over the Bandra-Kurla Complex in Mumbai. As soon as you step inside, you feel you have been whisked away to another place in another time.

And that's precisely what The Hunger Inc team, which started The Bombay Canteen in 2015, intended: they have managed to conjure up the spirit of laidback Goa in the heart of frenetic Mumbai.

It's with the idea of creating "a happy place" that the journey of O Pedro began for Sameer Seth, Yash Bhanage and Floyd Cardoz, partners at Hunger Inc.

A cohesive story seems to run through the design, food and beverages at this Goa-inspired restaurant and bar, perhaps because the entire team -- from design and graphics to F&B -- travelled together in groups on extensive recces through the state.

These trips helped them understand the state's complex culinary histories -- from little-known Portuguese recipes, the secret repast of Saraswat Brahmins to heirloom recipes of Catholic families.

Mumbai has seen "Goan restaurants" before, but not one that showcases the dazzling diversity of Goa's culinary repertoire.

'There is a little bit of Goa in everyone' 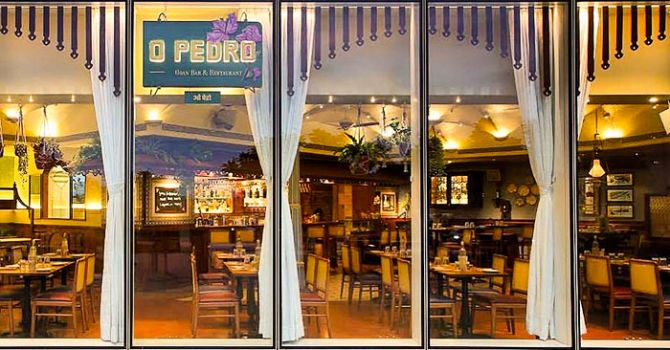 The design of this 2,500 sq ft-space in Mumbai's BKC has its roots in conversations with locals, street-side experiences and trips through Goa.
Photograph: @opedromumbai/Facebook.

"At some level, there is a bit of Goa in everyone. Everyone aspires to be laidback and chilled out," says Seth.

The team has built on this vibe.

The design of this 2,500 sq ft-space, by architect Ayaz Busrai of Busride Design Studio, has its roots in conversations with locals, street-side experiences and trips through the state.

Special plates, which reflect this story, can be found on one wall.

According to Seth, most bars in Goa are handed down from one generation to another, with each adding his or her own touch to it in the form of photos or football posters. The O Pedro team pays homage to this tradition by getting its members to put up stuff -- diners too are encouraged to bring in their photos/notes.

Vinegar in my drink 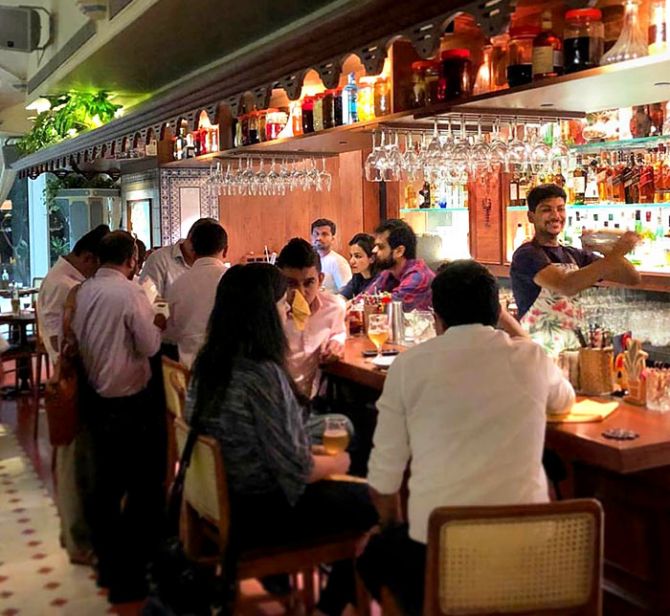 Each drink at o Pedro's has a story behind it, told to beverage manager Rahul Raghav by Goan bartenders and old ladies who create magical concoctions.
Photograph: @opedromumbai/Facebook.

The theme of seasonal and local, a signature of The Bombay Canteen, runs through O Pedro as well. Ingredients such as kokum, Goan toddy vinegar and cashew feature on the cocktail menu.

Each drink has a story behind it, told to beverage manager Rahul Raghav by Goan bartenders who work on cruises and old ladies who create magical concoctions with feni and local fruit.

Excise rules prohibits them from getting feni to the restaurant, so Raghav attempts to recreate those flavours in drinks such as the cashew-in-spirit -- a kokum-infused rum, cashew-infused spirit, amchur syrup, orange, lime, sugar and egg white.

I loved the Vasco Sour, in which toddy vinegar added a new dimension to the pisco, triple sec, grenadine and star-fruit juice.

History on a plate 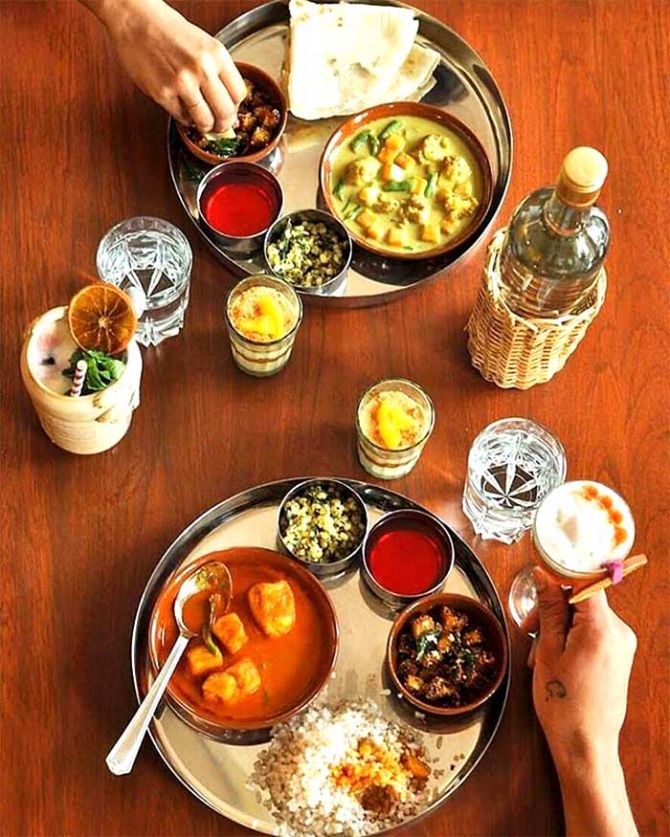 With dishes such as chicken baffad curry, bhindi and radish sorrack, and omelette rassa sandwich, O Pedro establishes the fact that Goan food is much more than fish curry and rice.

The dangar (cutlets), usually made with fish, are made here with corn and seasoned with Goan garam masala, chickpea flour and topped with kachumber.

The Portuguese stew, feijoada, features slow-cooked duck instead of pork.

The restaurant showcases personal histories too, as Cardoz brings his Goan heritage and heirloom recipes to the table in the form of Margao choriz and bacon pulao and Beryl's fish curry.

O Pedro's bread menu reflects Cardoz's childhood memories of the paowalla: sourdough poee (or poi; all dishes are spelled phonetically on the menu) with a choice of flavoured butters, ranging from balchao, cheesy-black pepper, whipped pork-rosemary and choriz.

A separate vegetarian menu puts paid to the misconception that Goan food is solely about seafood. Highlights include the tangy curry of Saraswat Goan pink beans and potato tondak, and the Panji green watana rassa served with fried savoury banana bread. 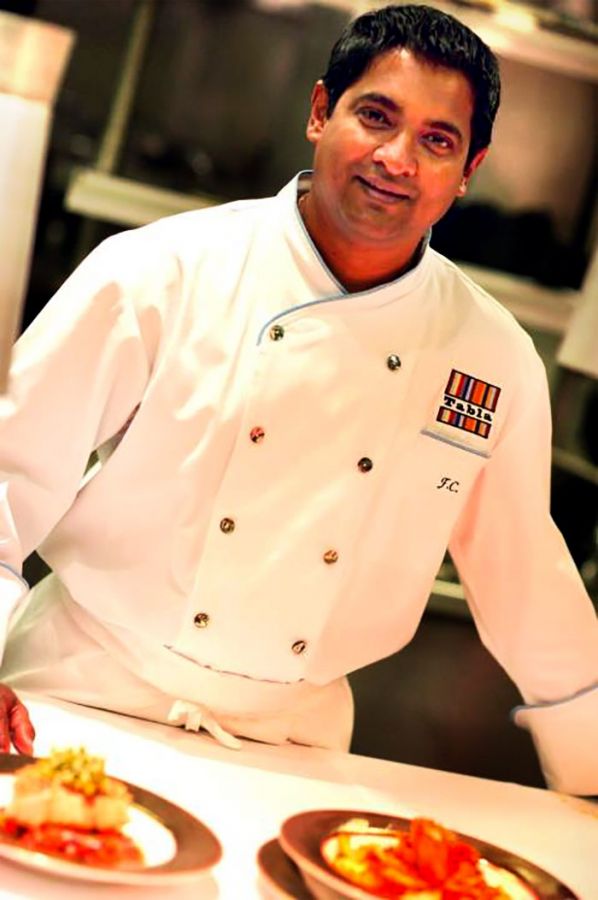 Toast the whole spices separately.
In a blender jar, add in the garlic, ginger, toasted spices and turmeric.
Blend with 200 ml of coconut milk. Strain through a fine strainer and reserve.
In a pan, sweat the onions in oil. Add the turmeric liquid and infuse with the turmeric leaves.
Simmer and add the green chillies.
Then follow with the remainder coconut milk. Simmer and season. Reserve the curry for later.
Now, cut the cauliflower into half.
Season the cauliflower and pan-sear to get colour.
Finish cooking in the oven at 180ºC for 10 mins.
Season the okra with salt and oil and grill till soft and cooked.
In a pan, reheat the curry. Add in the cauliflower, grilled okra and cherry tomato.
Taste and season with salt if necessary.