Exclusive recipes: How to cook a Mughal feast 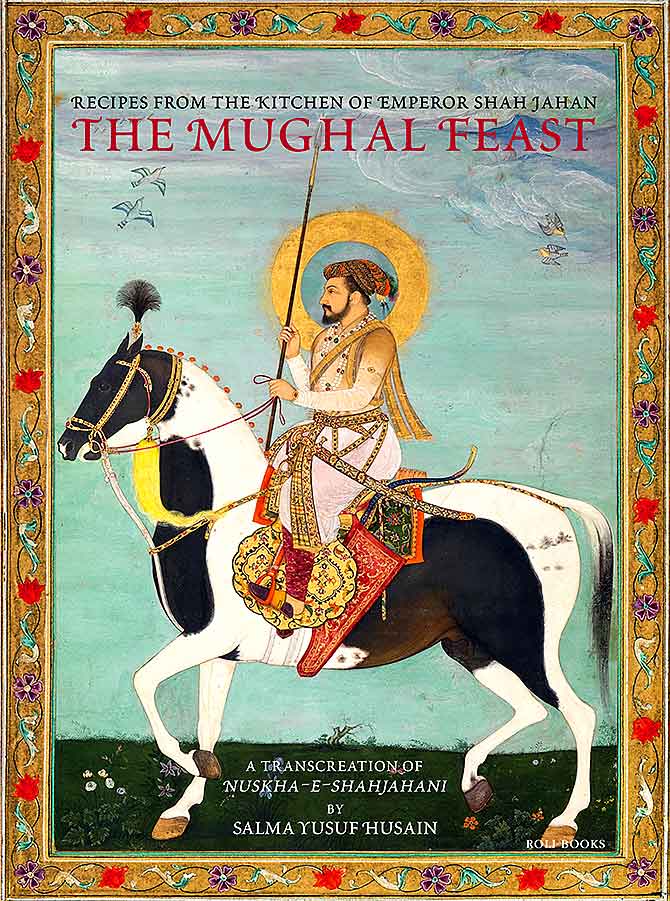 Does your mouth water at the thought of biryani and kebabs?

In the book The Mughal Feast: Recipes From The Kitchen Of Emperor Shah Jahan, Salma Husain has put together some traditional recipes from the royal kitchens during Mughal emperor Shah Jahan’s time.

There are special cooking instructions and tips on how to clean meat, soften bones, enhance cooking and retain flavours. 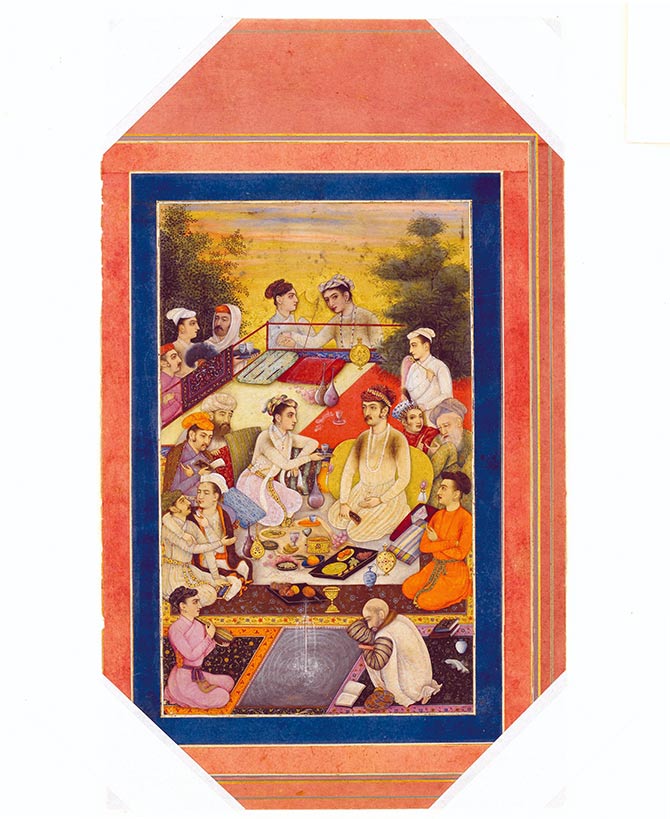 Presenting some exclusive recipes featured in The Mughal Feast.

1. Heat the ghee in a pan; add the onions and fry until golden. Add half the lamb pieces, salt and chopped ginger; fry until the lamb changes colour. Add sufficient water to partly cook the lamb.
2. Now add the beetroots, carrots and turnips with 3 cups water to cook the meat and vegetables on low heat.
3. When the lamb and vegetables are cooked and at least 1½ cups water remain in the pan, separate the lamb and vegetables from the stock and reserve. Strain the stock and temper it with 2 cloves; keep aside.
4. Make a fine mince of the remaining lamb pieces. Make a dry do-piyazah* (check notes below) with the mince and grind to a fine paste. Add white of egg and knead into a dough. Make marble-sized balls of this mix and deep-fry in hot oil.
5. Make a sugar syrup of one-string consistency with lemon juice*. Add half of the syrup to the reserved stock and bring to a boil.
6. Add the pounded coriander seeds, almond paste and rice paste to the stock; mix well.
7. Sprinkle ground cinnamon, remaining cloves, cardamom and black pepper; mix well. Add the spinach, dill and lamb pieces; bring to a soft boil and remove from heat.
8. Transfer into a serving bowl. Add the remaining syrup to the prepared soup and serve hot garnished with saffron.

1. Make yakhni with the lamb pieces*, ghee, onions, ginger, crushed coriander seeds and salt. Strain the stock and separate the lamb pieces.
2. Add half the mangoes to the stock, and cook until tender. Remove from heat and keep aside to cool. Squeeze the mangoes with hands to extract thick pulp. Strain and keep the mango stock aside.
3. Make a sugar syrup of one-string consistency*.
4. Cut the remaining mangoes into pieces, boil in water and then float in this sugar syrup and cook until tender. Remove from the syrup and keep aside.
5. Add the syrup to the mango stock and parboil the rice in it.
6. In a separate pan, spread the cumin seeds, followed by the lamb pieces. Add the whole spices and 2 tbsp sweet stock; cook on low heat until syrup is absorbed.
7. Spread the rice over the lamb, pour some ghee and cook on dum*.
8. While serving, arrange the mango pieces on the pulao and garnish with fried dry fruits.

1. Squeeze the tamarind with water to obtain the juice.
2. Heat the ghee in a pan; add the turmeric powder to colour the ghee. Add the onions and fry until golden brown.
3. Add the yam, gooseberries, tamarind water, pounded coriander seeds, ginger and salt; cook, on low heat, until the yam is tender and little water remains. Sprinkle freshly ground spices and put on dum* for 5 minutes.
4. Remove from heat and keep the dish on hot ashes, covered, for 2 hours to imbibe the smoky flavour. Then uncover and serve.

Chicken stuffed with meat and slow-cooked on cinnamon bed

1. Prick the chicken all over with a fork.
2. Marinate the chicken with onion juice, ginger juice and salt; rub well inside and outside the chicken and keep aside for 30 minutes.
3. Heat the oil in a pan; add the minced meat, onion, crushed coriander seeds, chopped ginger and salt. Stir and cook until the meat is tender.
4. Smoke* the cooked mixture.
5. Fill the chicken with the minced lamb and tie both legs with twine to keep the shape of the chicken intact.
6. Mix the saffron and ground spices with the yoghurt.
7. Apply the yoghurt and saffron mixture all over the chicken evenly.
8. Spread the cinnamon sticks on the bottom of the pan. Place the chicken on the cinnamon bed and pour the ghee around.
9. Make a semi-hard dough of black gram flour. Cover the pan and seal with this dough.
10. Place the pan on low charcoal heat and cook on dum* for 4 hours.
11. Remove the cover, take the chicken out, cut into four pieces and serve over the mince.

For do-piyazah dry, 1 cup water is added to 1 kg meat and cooked until all the water is dried up and the meat is cooked.

For both dry and with gravy, adjust ingredients according to recipe.

Boil 2 cups sugar with 2 cups water, and then cook on low heat, adding juice of 1 lemon.

When syrup is of one-string consistency, remove. Adjust ingredients according to recipe.

This is the one-string sugar syrup method shared before.

It is a technique of imparting a smoky flavour to a dish.

In a shallow utensil (in which the lamb or food to be smoked has been kept), a small bay is made in the centre and a small metal bowl, onion skin or even a betel leaf is placed.

A burning coal is placed in the bowl / onion peel / betel leaf, ghee is poured on the coal and covered immediately with a lid to prevent the smoke from escaping.

The lid is not removed for about 15 minutes, so as to allow the smoke to work on the ingredients inside.

The coal is then removed from the utensil and the meat / food is mixed well to retain the flavour evenly, then put through further cooking processes

Dum literally means ‘breath’. This process involves maturing of the prepared dish after the completion of the cooking process.

The pot is sealed as tightly as possible with dough or a heavy weight on the lid. This pot is then placed on hot ashes or an iron griddle on very slow heat. A few coals are also placed on the lid, if possible.

This process allows the individual flavours of the dish to blend into their own juices. The pot should be opened only before serving.

This is a meat stock. Boil meat with or without bones with salt, coriander seeds, onions, and ginger.

When tender, separate meat pieces from the stock and keep aside.

Strain the stock through a muslin cloth. For 1 kg meat, use 4 cups water if cooked in pressure cooker, or 8 cups if on coal fire. Adjust ingredients according to recipe. 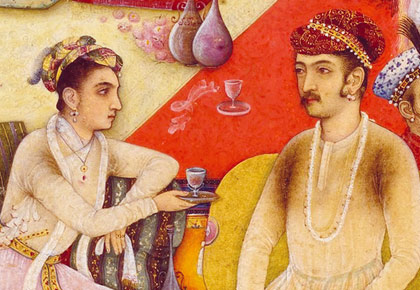 Excerpted from The Mughal Feast: Recipes From The Kitchen Of Emperor Shah Jahan by Salma Husain, with the kind permission of the publishers, Roli Books.

TELL US: Which is your favourite Mughal food? Share your comments in the messageboard below.