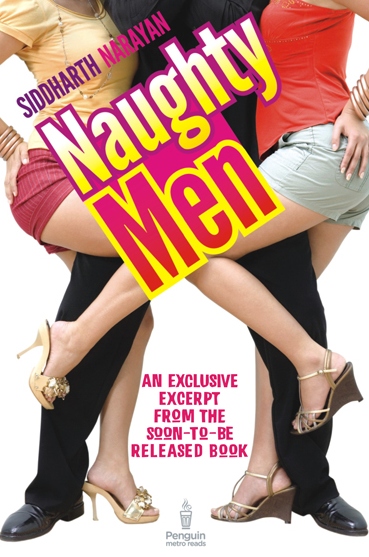 We bring you an excerpt from debutant author Siddharth Narayan's Naughty Men. Read on!

Siddharth Narayan's first book Naughty Men is about two much-married MBAs who seem to have hit their mid-life crises. Frustrated with their personal lives, the two eponymous 'naughty men' head out on a raunchy road trip along India's west coast from Kerala to Goa.

Here is an exclusive excerpt from the book where the partners-in-crime plan their journey!

I met Sid at Monster's, an upmarket bar. We ordered Teacher's as usual.
He said, 'So hero...'
I excitedly said, 'Do you know, I met Rajnikanth.'
'How did it go?'
'Man, he is unbelievable!'
'So what did you guys discuss?'
'The theme, story, features and punchlines for his next movie.'
'You have a name for the movie?'
'Tentatively it is called Rajamanickam, but keep it to yourself.'

Sid grinned. 'Got it, you don't have to explain anymore. This should be a block-buster.'
I smiled. He got the full story in that one line. No wonder Sid's and my frequency matches so well. 'So, what is the plan?'

He said, 'Let's do Kerala and the Mangalore coast, right up to Goa, and get back. What do you say?'

He exclaimed, 'We should get great babes in Kerala, the hub for real activity is god's own country, man!'
'Are you sure?'
'As sure as this drink we are having, man!'
'So any luck with Meher?'
'You are screwed up, Sid. Meher is a friend and it stops there. Never thought anything more.'
He laughed.
A beautiful woman entered the bar. I inadvertently raised my glass and gave a twitch of a smile and she acknowledged my presence.
'You know her?'
I grinned. 'No, I am just trying to be courageous.'
'You see the hunk sitting over there, she is at his table,' said Sid.
I almost got up and said, 'Oh, shall we leave now?'
'No sit, we can manage.'
A young guy came to our table and said, 'Sir, I have seen you on
YouTube and have enrolled for salsa. You were fantastic!'
'Want an autograph?'
He laughed. Sid also joined him in laughter. The bartender came and gave me a small champagne bottle and said, 'It is from that lady over there.'
'Oh, but why?'
'Here is a note from her, sir'
I opened the note, it was written in lipstick, 'Hey YouTube Man, you rock! Malini.'
I looked at her table. She was smiling. I waved my hand, showed her the bottle and mouthed a thank you.
I was indeed a celebrity. My little video on YouTube had at least got me a nice champagne bottle. Sid and I opened it and had a few sips. It was dry. Actually, we didn't like it too much. We were not champagne fans.
Sid asked, 'For the trip, do we take your car or mine?'

'We'll take my BMW. It is good for my back. Your Audi sucks!'
He chuckled. 'Settled. We split everything midway, even the babes'.
I shook my head. 'Telling Vidhya?'
'Yup, meeting petro clients in Mangalore and Goa'
'Fu***r, you are stealing my line

He laughed. After couple of hours, we finished at the bar and left.
The next day at breakfast, I was brimming with energy. Meera looked at me inquisitively. I said, 'I got a great assignment.'
'Hmm ' As she didn't probe, I had to volunteer information. 'I have to study the west coast and propose a resort plan for a major hospitality group'
She stopped with a spoonful of cereal halfway to her lips. I raised my eye brows. 'Wow! You get all kinds of assignments'
I dug at my cereals. Meera doesn't make Maggi for breakfast, luckily.
Rohan chimed in, 'Papa, if it is a holiday, I will also come along'
I looked at him and said, 'No beta, this will be sheer hard work. But we will plan a holiday with you during your vacation.'
Meera rolled her eyes, sat down and twirled her glass. I waited for whatever was coming next. The waters recede before a tsunami strikes.
She finally said, 'I need money.'
'How much?'
'A lakh.'
The spoon dropped from my fingers. This was a delicate moment. If
I asked 'Why?', she would hand me a long questionnaire to fill about my west coast trip and hire two external interrogators to grill the shit out of my happiness. So, I decided not to get into any discussion and said, 'Ok'
There was silence for a few minutes. Then she said, 'Papa was saying that the sofas are too soft and he is having pain in his lower back'
I looked at her and said, 'Poor dad, please change the sofas quickly.'
She didn't understand whether I was being sarcastic or genuine.
When my back was hurt, she was asking that the doctor perform at least one surgery. Even removal of a portion of my brain was fine. But when her father's back hurt, she would take my money and change sofas at our place. Or was it at his place? F**k it, I wasn't jumping into this conversation. I didn't give her any time to think. 'OK, time to go to office. By the way, I leave in couple of days.' And thus the matter was neatly settled.
Later in the day, I called Sid and said, 'Matter sealed at home'
He said, 'Mine too. I am off to visit petrol companies all over the west coast. So make sure you sing the same song at home. The ladies exchange notes. And what is your ruse?'
Study the west coast and propose a resort plan for a major hospitality group'
There was a stunned silence from Sid's end and then slowly he said,
'And she bought that?'
'I don't know, maybe, but I also gave her a lakh to buy new sofas.'
He laughed so hard that my ears hurt. 'Fu***r, stop cracking up. You think Vidhya has bought your petrol shit?'
He said, 'May be, I promised her a holiday in the Maldives'
This time I laughed so hard that he shouted, 'Fu***r, stop cracking up so hard on the phone!'
Anyway, the matter was sealed for both of us. We were now ready to soar!