In pix: Interesting Christmas rituals around the world

Some of these rituals are centuries old and have been passed on over for generations. 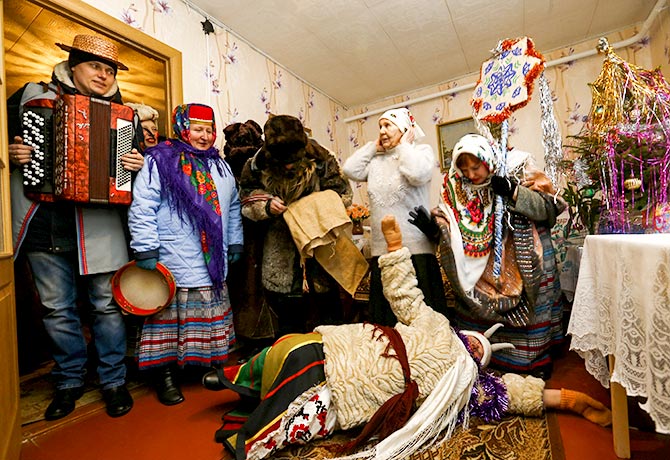 In Belarus, people follow an Orthodox pagan ritual called 'kolyadka' in which they sing songs and enact scenes celebrating the birth and life of Jesus.
If someone sings a song for you or your family, you must reward them in return.
The festivities continue for a month and locals believe that every thing they sing about in 'kolyadka' comes true. 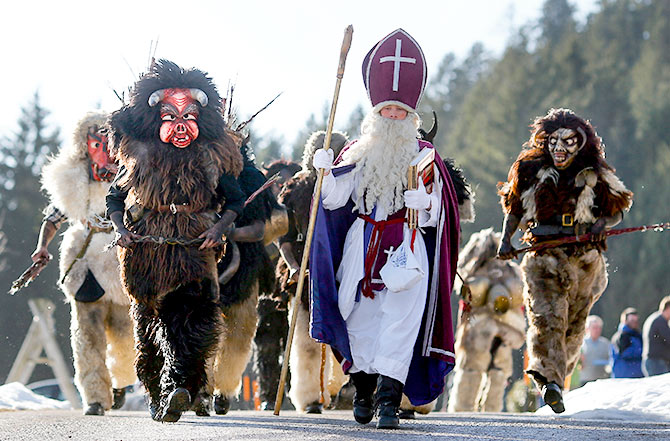 In Germany, a person dressed as Saint Nicholas will visit homes and bring you blessings and good luck. But that's not all. Like you can see in the picture Saint Nicholas (centre) is accompanied by single men in traditional Bavarian attire known as 'Buttenmandl' and 'Krampusse'.
Their costumes are made of animal skins and masks attached to large cow-bells used to make loud, frightening noises. While Saint Nicholas brings blessings and good wishes, the other two punish the idle.

In the holy city of Bethlehem, ahead of Christmas, believers wait for hours to pray in the Grotto, believed to be the place where Virgin Mary gave birth to Jesus. 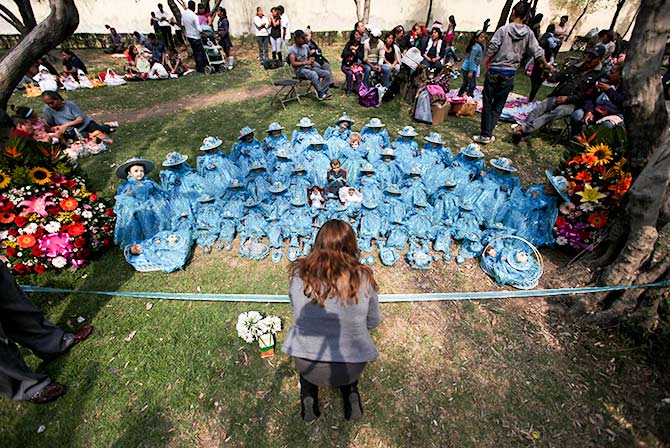 A woman is seen praying to an arrangement of dolls in in Xochimilco, on the outskirts of Mexico City.
Mexicans believe the dressed up dolls represent baby Jesus. Forty days after Christmas, they carry large, decorated effigies of young Jesus to the church to be blessed. 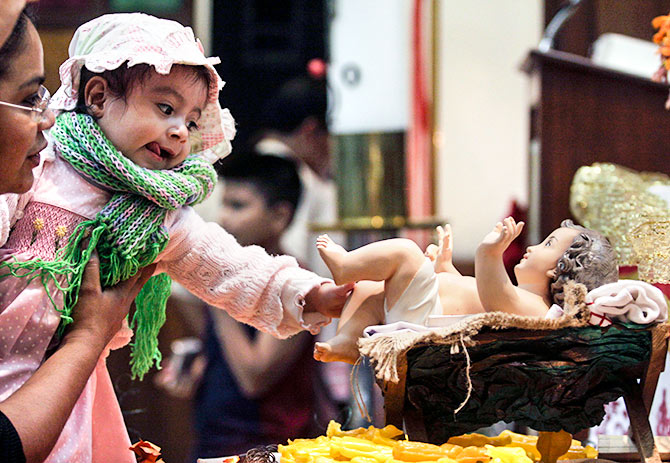 A child touches a figurine of baby Jesus during a commemoration on Holy Innocents Day in Antiguo Cuscatlan, on the outskirts of San Salvador.
In Central America, around Christmas, celebrations are held in honor of children, termed the Holy Innocents. The ritual pays homage to children below the age of two who were ordered to be killed by King Herod, according to biblical passages. 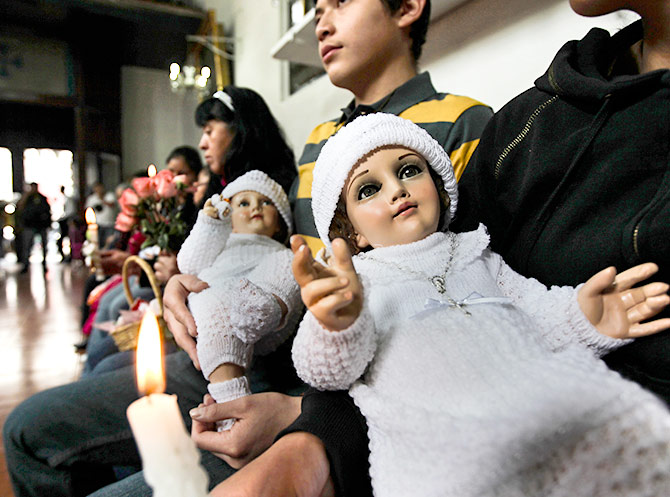 In Mexico, people attend a prayer mass 40 days after Christmas. After the mass, they carry with them elaborate dolls of baby Jesus to be blessed at the church. 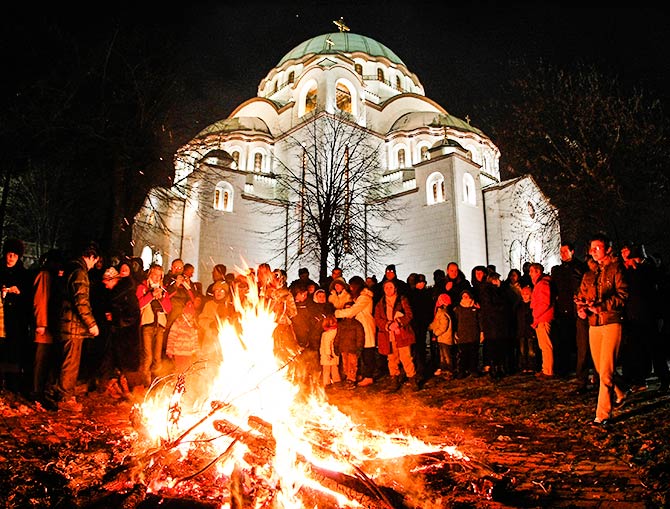 In Serbia -- where people follow the Julian calendar as opposed to the Gregorian one --Christmas comes 13 days late.
A Serbian tradition involves burning oak logs symbolic of the Nordic Yule log.
In Scandinavian homes, the yule log is symbolic of an entire tree that was brought home ahead of Christmas in ancient times. One end of this log/tree would be lit by a part of the log preserved from the past year. It would then be placed in the hearth or fireplace to burn through the 12 days of Christmas. 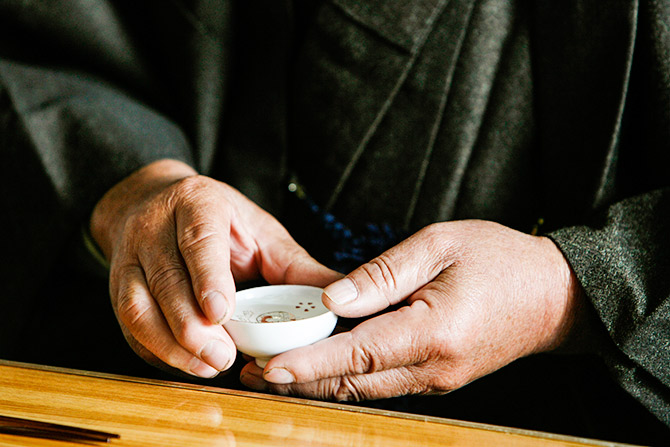 Yasutaka Toriyama, a descendant of Japan's 'Kakure Kirishitan' (Hidden Christians), holds a cup of sake at Ikitsuki Island in Japan. On Christmas eve, the sacred relics -- a medal of the Virgin Mary, a crucifix and other revered objects -- are taken from a cupboard and placed on an altar. This ritual has been passed down through centuries from Japan's earliest Christians. 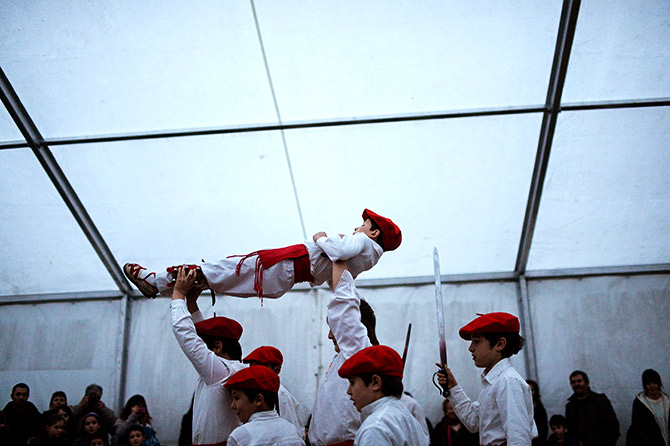 A dancer is lifted by his companions in front of Olentzero or Father Christmas, and his helper (both not pictured), during Christmas Eve celebrations in Elorrio, Spain.
In Basque tradition, children write letters or prepare a wishlist for the mystical Three Kings, who were believed to have followed the star and brought gifts to infant Jesus.
On Christmas eve, the Olentzero, a pipe-smoking, wine-drinking coal man delivers presents to the children. Most children enjoy a second round of gifts on January 6, the day of the Reyes Magos (The Three Kings).