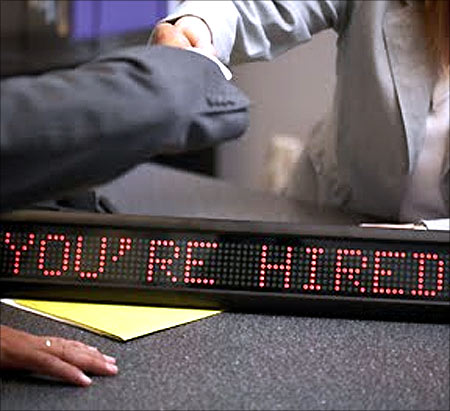 The 2012 'Campus Track' survey results by Nielsen suggests that majority of MBAs preferred to work with FMCG firms, followed by consulting and banking firms in that order.

The fast moving consumer goods (FMCG) sector has been voted as the most coveted sector for employment by B-school students of the class of 2012, according to a latest Nielsen survey.

The 'Campus Track' survey by Nielsen suggests that 36 percent of business school graduates prefer to work with FMCG firms, followed by companies in areas of management consulting (29 per cent), IT consultancy or services (20 per cent) and investment banking (20 per cent).

"With the FMCG growth in the country being driven by consumption, the sector continues to find favour with students who see it as a sector with huge growth potential," Nielsen Executive Director Dinesh Kapoor said in a statement.

The IT sector, especially IT services and IT products made a comeback on the list of most preferred sectors for employment, he said.

In terms of financial package, the average salary expectations from a 'Dream Company' amongst the class of 2012 remained steady as compared to the last year at Rs 16 lakhs per annum.

The salary expectations from a foreign company continues to remain almost double than that from an Indian company, the survey said.

Campus Track B-schools is a nationwide study conducted by Nielsen between October-November 2011. The study is in its12th year and represents the views of around 1,100 B-school students from the batch that will graduate in 2012 from the top 35 B-schools in the country.

The survey states that the top five dimensions students consider when it comes to seeking employment are namely -- high degree of independence at work, salary package, learning on the job, growth prospects and standing of the company in the market, respectively.
Source: PTI© Copyright 2021 PTI. All rights reserved. Republication or redistribution of PTI content, including by framing or similar means, is expressly prohibited without the prior written consent.
Related News: Nielsen, FMCG, Boston Consulting Group, Aditya Birla Group, Procter & Gamble
COMMENT
Print this article
10 things to consider before signing your employment contract
Six skills hiring managers look for in YOU
Top 6 sectors that will CREATE JOBS for young graduates in 2012

Is the job squeeze in India for real?

India is a great place to study, not work, say int'l students