A sedentary lifestyle can strain your metabolism, where you end up burning only one calorie per minute! 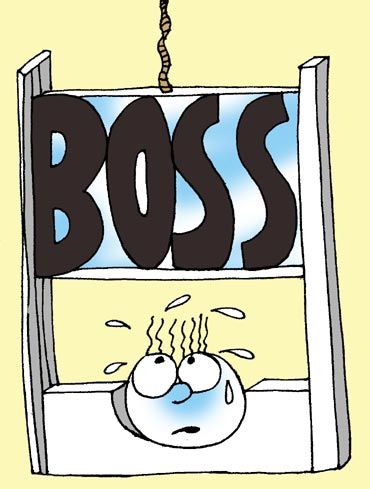 With an arguable majority of white collar workers leading unhealthy lifestyles, it is only natural that you find yourself on the wrong side of the thermometer more than once a year.

However, when you begin to exceed your sick leave days and pile into a slew of unpaid ones, you need to realise both the cost and cause of not making it to work, on several occasions.

On an average, workers in the private sector receive about seven and up number of sick leaves in a year.

However, of late, employees have been taking more number of sick leaves than the ones commissioned to them, as per their contract.

This is primarily due to the fact that these employees have begun to face the physical and mental brunt of their everyday jobs.

Here's how it manages to destroy their health, in different ways.

1. Sitting at your desk for long hours

Sitting is the new smoking!

It's also a right old pain -- in the back, in your shoulder and (ahem) your behind.

A sedentary lifestyle can strain your metabolism, where you end up burning only one calorie per minute, not to mention the risk of drop in insulin efficiency.

The constant back pain and soreness from sitting for prolonged periods can even lead to musculoskeletal disorders.

This is because some of the most important muscles are inactive for long hours.

Take breaks -- not the kind where you get a cup of coffee and chat by the water cooler.

Just get up and go for a minute's walk around the room or the corridor.

Make sure your chair is angled right, so that you're not hunched over your computer for most of the day.

Practice exercises that you can do while sitting -- stretch your toes, fingers, arms and legs intermittently through your shift.

Most importantly, take some time to exercise before and after work -- even a few basic stretches and jumping jacks at home will suffice.

2. Staring at the screen for long stretches of time

The sudden pangs of headaches, migraines or general dizziness after spending several hours staring at your computer, happen as you are straining your eyes significantly.

Make sure to get a protective screen-guard fixed on your computer screen, which helps reduce the possibility of eye-sight damage.

At the same time, you should practice a couple of eye-exercises, for instance rolling your eyeball from side to side or top to bottom, to keep your vision stronger and healthier.

Have you ever experienced a slight numbness in your wrist, after a whole day of extensive typing?

Or a tingling feeling every time you move or crack it, at an odd angle?

This is called 'carpal tunnel syndrome', which refers to a pinched nerve on your wrist that leads to the eventual weakening of both your hand and arm muscles.

While your job may entail you to type non-stop, try carrying out a few exercises, like circling your wrists or clenching and unclenching them, so they get the blood circulation flowing and prevent your muscles from becoming sore.

4. The stress of tight deadlines and difficult bosses

Tight deadlines and difficult bosses are the highest cause of soaring stress-levels and overall fatigue in a professional environment.

At the same time, the existence of workspace competition only adds fuel to the fire.

In 2015, polling site Gallup found that about 50 per cent of the 7,200 adults surveyed left a job to get away from their manager.

Such high levels of anxiety, lead to a sharp rise in blood-pressure and a slew of health problems associated with it.

Be strategic about the projects you take on and at the same time, always be ahead on projects.

Also if you feel like your boss is treating you unfairly, politely inform him of his unprofessional behaviour.

If he refuses to change his attitude, then take it up with HR.

While many swear by the night as their most productive time of the day to catch up on all pending assignments, research claims that burning the midnight oil actually makes you less productive.

It also leads to an increased calorie intake, which could open the floodgates to diseases such as obesity, heart attacks and cancer -- due to a higher level of cortisol.

Follow a fixed pattern, where you work your regular hours and then pool in at least eight hours of undisturbed sleep per night.

6. Ordering in for lunch

It isn't always possible to prepare and take in packed lunches to office, leaving many young professionals to make ordering-in a regular habit -- both due to the lack of time and more so, inclination.

This is highly detrimental in the long run, as take-away food is anything but healthy.

This allows weight gain, high blood pressure and all the others kinds of diseases to run amok.

Prepare your lunches for the week through the weekend, so that you can avoid ordering in as much.

If you are compelled to order in, then you should look for a healthier alternative to that monstrous cheese-burger.

According to a 2016 study conducted by a group of six Bhopal-based urban designers and road engineers, travelling a distance of 40 km during peak hours in Delhi, in 2016, would entail a person to spend an average of three hours and 43 minutes on the road, as opposed to one hour and 36 minutes in 2011.

While it isn't always feasible, you should try and search for accommodation that allows you to live closer to work, or for the shortest route available to get to work on time.