We'd asked you, dear readers to share your experience of learning a foreign language.

Here, Pune-based Rediff.com reader Aparna Phatak tells us how German language helped her break the barriers and connect emotionally to the people of Germany and its culture. 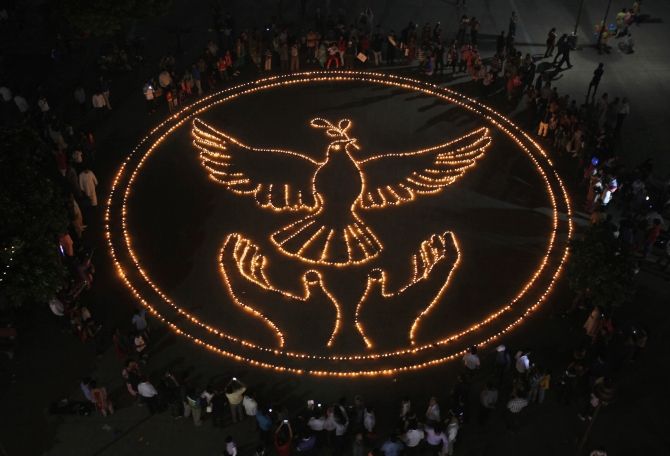 Learning a foreign language opened new doors to me.

It threw open the doors of knowledge about various lands, varied cultures, human nature and above all human understanding.

I started learning German as a fourth language in class 8, and by the time I reached class 10, I was almost sure about making a career that revolves around the study and use of languages.

In fact, the joy of learning German prompted me to learn another language that belonged to a totally different culture, namely Japanese.

Let me elaborate on my experience of learning German, as it was my first exposure to a ‘foreign language’.

I was passionate about learning the language.

The subsequent scholarship to study in Germany for a short period was a turning point.

Till I visited the country, German seemed to be a language governed by strict grammar rules, complicated word combinations and a relatively 'harsh' language. But that is what happens when we learn it as 'foreign language'.

When we learn a language beyond its basic grammar, structure and vocabulary, we begin to understand that it tells us about the people who speak it.

The language begins to ‘speak’ for the people it represents.

The further we learn it, we begin to live it, love it and consequently we begin to like the culture and the people that the language represents.

The highest point is when we begin to 'feel' the same way as the person native to that language/ culture feels.

At this point, the language ceases to be a ‘foreign’ language and becomes just ‘another’ language.

The language has surely built a bridge between varied cultures and people from distant lands.

Let me explain this with an example.

When I started learning German in 1988, Germany was not a united nation as it is today -- West Germany (FRG) and East Germany (GDR) were two different countries.

In fact, I remember, as a college student, I had meticulously gathered newspaper and magazine clippings related to the various aspects of Reunification of Germany.

I was so much into this activity that the Unification of Germany on October 3, 1990 seemed to me the most important landmark.

It seemed to be an occasion for personal celebration.

I was happy that now the people/families who had long been separated 'by a Wall', despite sharing a common history and language, could prosper together.

I was born in post-independence India, and in a place distant from North India, where the people had borne the brunt of Partition in 1947, even after many years.

The experience of Reunification of Germany, actually made me realise the agony and trauma the people on either side of the border must have endured in 1947 and the subsequent years.

Thus, I graduated from learning the alphabet, grammar, literature of German language, to understanding its history, geography, culture, and most importantly developed an understanding about how the German people think, act and feel.

When I, one Indian learnt German, I got mentally, emotionally connected to many aspects of Germany and the German people.

Similarly, the Germans I came in contact with developed interest in India and Indian culture.

Imagine what happens when thousands of Indians learn German, in fact any other foreign language!

What a strong bond is created!

When learning a language reaches the point of understanding the feelings of that 'other folk' that no more remains 'foreign' to you, but is very much a part of you, it has certainly accomplished its final aim of fostering 'international understanding'.

Hence, I truly feel that learning a foreign language is a key to promote inter-cultural ties and international understanding, and to ensure lasting world peace.