Indian-American elected top national academician in the US 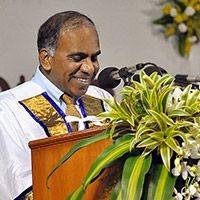 Indian-American Subra Suresh, currently president of Carnegie Mellon University, has been elected as a member of the prestigious Institute of Medicine (IOM), becoming the only current university president to be elected to all three national academies.

Suresh, who earlier served as director of National Science Foundation (NSF), a USD seven-billion independent government science agency charged with advancing all fields of fundamental science, engineering research and education, is one of the only 16 living Americans to be elected to all three national academies (IOM, the National Academy of Sciences and the National Academy of Engineering).

Election to a National Academy is among the highest professional distinctions accorded to engineers, scientists and medical and health professionals.

Academy membership honours those who have made outstanding contributions to their fields.

The IOM recognised Suresh for advancing health and medicine through his research into cell mechanics related to malaria, blood diseases and certain types of cancer, a media release said.

"CMU's new president is truly a scientist and educational leader for our time," wrote Ray Lane, partner emeritus at Kleiner Perkins Caufield & Byers and chairman of Carnegie Mellon's Board of Trustees, in an email to the CMU global community.

"He embodies, through his individual scholarship as well as institutional, national and global leadership, Carnegie Mellon's commitment to cross boundaries to transform lives," Lane said.

Suresh is the first CMU faculty member to hold membership in all three academies.

He has been elected a fellow or honorary member of all the major materials research societies in the US and India.