How a 'notorious' student became a responsible doctor

Dr Yusuf Merchant's book Happyness will tell you how to turn your life's negative situations into your strengths. 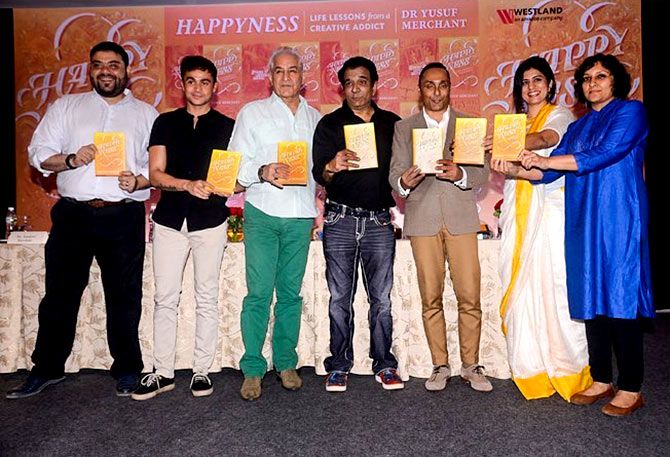 Mumbai based psychiatrist and anti-drug crusader Dr Yusuf Merchant has written a book that he believes will help you deal with life's adversities in a positive way.

The book Happyness: Life lessons from a Creative Addict -- has interesting stories from Dr Merchant's journey that shaped his career.

From discovering his mother's secret marriage to dealing with his own insecurities and weaknesses, the tell-all book offers lessons from Dr Merchant's own mistakes and vulnerabilities.

Presenting an excerpt from the chapter 'An incident that never happened changed my life.' 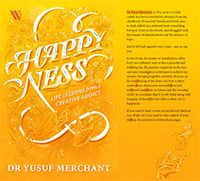 My first stop in college was always at the notice board, which carried the names of errant students who were being called to the principal's office.

I wanted to be the most notorious guy around. I was disappointed on the days when I didn't make it to the list. Although my deviant behaviour gave me the validation that I needed through the attention of my peers, it also propelled my pseudo-inflated ego to a higher level.

This recognition made my conduct even more rebellious. It was a vicious cycle.

Broken blackboards, violent canteen fights, bursting Diwali crackers during lectures, throwing biology specimens around the lab, arguing needlessly with lecturers, flashing a knife once in a while, attempting to kidnap the librarian: these were just some of my shenanigans.

At home things were worse. I would get back early in the morning before my father woke up for his prayers.

My grandmother was my enemy as she reported my timings and bad behaviour to him, who would slap or belt me. My mother stayed in her father's home.

Ever since I had discovered that she was secretly married to another man, I'd distanced myself from her.

She didn't matter to me at all, or at least that's what I wanted to believe. My boredom threshold was close to zero. I needed excitement all the time.

My close friend, Asif Mistry, stood by me through all my messes. Every time he bailed me out, I would promise him that I would never repeat the same mistake. I never broke that promise, I think. I just made new 'mistakes'.

Life was one painful roller-coaster ride with screeching turns that took me down steep slopes of suffering.

The unruly behaviour that brought me recognition from my peers pained my near and dear ones. The people who suffered the most were my siblings.

The regular reporting of my aberrant behaviour ensured angry and violent scenes at home. The more my father beat me, the more determined I was to break the rules again.

During one of my visits to Asif's home, in my final year at medical school, his grandfather suffered a stroke. The entire household was in panic mode. Asif ran out of the room to call for an ambulance. His father was shouting at everyone around to call the doctor.

I was at his grandfather's bedside. 'Don't worry, Dada, all will be well soon. The doctor is on his way,' I said stroking his hand gently.

He lay on the bed with his left hand gripping his chest, his eyes locked into mine. When he spoke, his voice rasped breathlessly.

'I know that I am going to die…I have been a devout Muslim all my life.
'I have been praying all five namaaz diligently and have done Haj thrice, but now I am feeling anxious about taking the journey beyond. 'I know that I've been a good Muslim, but that is not helping me. I'm trying hard to recollect all the good that I've done in my lifetime.
'Remembering my good deeds is giving me some reassurance to set forth on this unknown journey. But for every good deed I recollect, I also recollect a few more bad deeds that I've done.'

He broke into coughs, and his eyes dropped to the floor.

When he squeezed my arm lightly, I could feel no warmth from his hands.

He whispered slowly, wheezing, long pauses punctuating his sentences, 'Beta…remember when you are at my stage in life, when…you are dying, the only thing… that will matter to you…is how good…you have been. You will also remember the bad deeds…Beta…keep…doing…' He stopped.

I stared at him, worried. He stared back, blankly.

He wasn't moving. I freaked out and yelled, 'Asif… Asif…Asif!'

I don't remember the sequence of events that followed, though I remember Asif's mother wailing, his brother crying, a doctor and some ambulance boys rushing in. I was more moved than I could express.

Back at my hostel room, I was haunted by his words.

They made sense. I decided to concentrate on doing good deeds.

I did not want to feel insecure when I was dying. I stopped baiting my professors and getting into meaningless fights.

Over the next few years, I studied at every opportunity I got.

After graduating from medical college, I registered for a postgraduate degree in psychiatry.

Halfway through that degree, I had a showdown with the head of the department over what I felt was the overuse of electroconvulsive shock therapy.

I didn't want to administer ECTs, which were a fundamental part of the treatment in those days. I changed tack, learning everything I could about drug demand reduction strategies, including drug prevention and drug rehabilitation. Over the next few years I developed a highly successful rehabilitation programme for addicts and alcoholics in the city of Mumbai.

I was intentionally doing what I considered good. My rebellion disappeared once I had established another identity, another goal: that of becoming a good doctor.

I wanted to be recognised, but I had acquired another motto: 'Be a good human being.' That was my new mantra.

Over the next decade I moved head-on into achieving my goals. I studied everything I could gather about drug recovery. I met only drug addicts, alcoholics and their families, other experts, as well as film stars and sports celebrities who were part of our prevention campaigns. By then both my parents had died, and my siblings were married and stayed in different parts of the city.

Over time, living with and reaching out to addicts in my home, I too began to transform.

The need to seek excitement or validation from others faded away. The angry young man disappeared. R

e-examining the past I saw the truth: I cannot hold my parents solely accountable for my actions. I was part of the problem.

My vocation required me to find ways to cut through the distorted perceptions that were part of every addict's world view.

As I did that, I also cleared mine. I was living life on the fast lane. Therapy sessions and prevention campaigns accounted for all my waking hours.

In those early years, I was so closely involved in the process of helping my patients recover that even my brothers and sisters never got to see me. I would bump into my school friend Asif more than a decade later near his new residence on Residency Road. He invited me home and introduced me to his family. 'This is my best friend from school, Dr Yusuf Merchant.'

His sweet daughter, Haya, ran into a bedroom and returned with a scrapbook. Opening the book shyly, she showed me a few clippings from newspapers featuring my photographs with some film stars.

She said in a high-pitched voice, 'My dad would tell me, this celebrity Dr Yusuf Merchant was my best friend all through school and college -- I didn't believe him then!' After treating me to a delicious dinner, Asif saw me to my car.

In his characteristic mischievous tone, he inquired, 'Tell me one thing. How come you have changed so much -- from that selfish, risk-taking bastard into this good human being and celebrity?'

'It was what your grandfather said,' I told him, the memories rushing back.

'Remember?' I went over that conversation again, telling him in great detail what his grandfather had said to me after he had gone out of the room to phone for an ambulance.

Asif stared at me, dumbstruck. 'Don't fuck around, Yusuf, my grandfather is still alive.' I was as shocked as he was. But it was Asif saying so; it had to be true. Could I have invented all that had happened?

The vivid memories, the visuals, came back to me as I drove back home. Perhaps I had seen his grandfather at a time when he was ill, and had imagined the rest. But it was so real, so clear!

Once again, I went over the episode in my head. I could see myself sitting beside his grandfather. If it had really happened, I wouldn't be able to see myself in the visual: you don't see images of yourself in recollections of real events.

It was a dream, even if it had been an unusually powerful one. an event that had not happened had changed the course of my life.

I now believe that the event, and the dream, were both dictated by my intentions.

I had wanted to contribute, to make a difference in people's lives ever since my Adyar interaction.

My intention to do good must have been so powerful that I dreamt a dream and believed it to be real. Real enough to transform my life into a meaningful one. 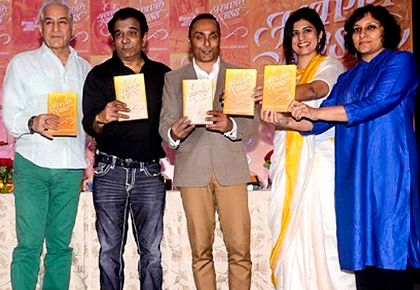 Excerpted from Happyness: Life lessons from a Creative Addict with the kind permission of publishers, Westland Books. 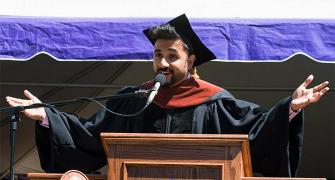 Vir Das to grads: How to be stupid yet win at life 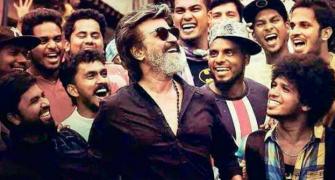 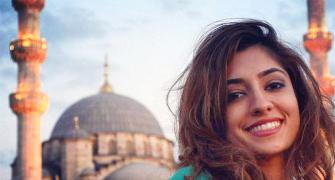 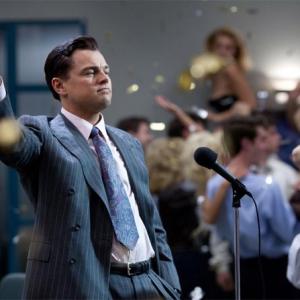