5 things you must know about Mort Walker, the creator of Beetle Bailey

Walker passed into the ages on January 27, but months of his works still exist and will appear throughout 2018! (From left) Mort Walker, Al Jaffee, and Arnold Roth receive awards from the National Cartoonists Society's Medal of Honor in April 2016.
Walker died in his studio surrounded by the cast of his cartoons.
Photograph: Wikimedia Commons.

Cartoonist Addison Morton 'Mort' Walker -- the creator of Beetle Bailey, which chronicled the antics of the US Army's laziest private -- passed into the ages on January 27. He was 94.

Walker, who was born in 1923 in Kansas and grew up in Missouri, started publishing cartoons when he was barely 12 years old. Since then, he had been involved in more than a half-dozen comic strips, including Hi and Lois. But his greatest success was Beetle Bailey.

Beetle Bailey's earliest appearance was as Spider in cartoons Walker published in the Saturday Evening Post in the late 1940s. Spider became Beetle Bailey in 1950 in a college humour strip created by Walker.

He 'enlisted' in the US Army in 1951 and has remained a private with the other beloved characters at Camp Swampy ever since.

Walker, who had served in the US Army during World War II and was discharged as a first lieutenant, brought his expertise to the strip. And Beetle Bailey's mishaps, appearing in as many as 1,800 newspapers, entertained readers across the world for decades.

While Walker's legacy will be carried forward by his sons Greg and Brian, who have handled Hi and Lois since the 1980s and collaborated on Beetle Bailey since the 1970s, there will only ever be one Mort Walker.

Here are 5 reasons why: Beetle Bailey was born as an undergraduate at the University of Missouri, Mort Walker's alma mater. The university has honored Walker with a statue of Beetle on campus.

Beetle Bailey is reportedly the longest-running comic strip drawn by its original creator in the history of comics.

Walker, the Associated Press reported, attributed the success of the strip to Beetle's indolence and reluctance to follow authority. He was quoted as saying, 'Most people are sort of against authority. Here’s Beetle always challenging authority. I think people relate to it.'

Camp Swampy's highest-ranking officer, General Amos Halftrack, was drawn ogling his secretary, Miss Buxley, for a long time. After feminist groups pointed out that the strip made light of sexual harassment, Walker sent Halftrack to sensitivity training in 1997.

Beetle Bailey was also one of the first American comic strips to add an African-American character to a white cast. Lt Jack Flap made his debut in 1970, two years after Peanuts added Franklin.

Mort Walker's home was once the studio of Gutzon Borglum, the sculptor of Mount Rushmore.

Over the years Walker's home became like a cartoon museum.

Walker also launched an actual museum -- the Museum of Cartoon Art in 1974.

Bill Janocha, who worked as Walker's assistant for more than 30 years told the Stamford Advocate, 'Working ahead, months of his work exists and will be appearing throughout 2018. Thousands of hand-drawn gag sketches have been saved, so Mort's writings and layouts can potentially continue to help steer Beetle Bailey for years to come.' 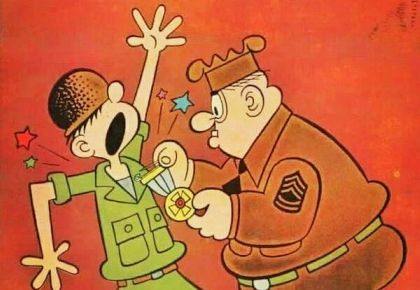