Alarm bells ring as Google trends for the past year show India saw the highest number of searches in the world for 'Blue Whale Game'. 'The game was a devastating one... once you enter it, you would not be able to come out.'

Vigesh, a 19-year-old student from Tamil Nadu, wrote in his suicide note before finishing the fatal last step of the Blue Whale Challenge.

As news emerged that the deadly suicide game had claimed it's first victim in Tamil Nadu, India also woke up to the news that the game had spread through the country more than anyone could have imagined. A Google Trends report for the last 12 months showed that India had seen the highest number of searches related to the Blue Whale Challenge in the world!

Worse, reports revealed that India has held the rank -- Google trends change dynamically -- consistently for three months, with a massive peak in searches starting in July 2017.

While Blue Whale Challenge search trends don't automatically translate to people taking up the suicide challenge, the related queries section of the Google Trends report for India revealed the most searched related topic was 'Download Blue Whale Game.' (The Blue Whale Challenge cannot be downloaded; it is not an app.)

What is the Blue Whale Game?

Philipp Budeikin, a former psychology student from Russia, claimed that he invented the game, which involves a series of challenges assigned by administrators to the players over a 50-day period.

Tasks in the Blue Whale Challenge range from watching horror films in the middle of the night to self-harm -- all of which are documented for the curators as proof -- leading up to the final challenge, which requires the player to commit suicide.

Since the Blue Whale Game is not an app and neither does it have a website, but piggybacks on social media, it has been challenging to stop the curators of the game from seeking out vulnerable teenagers.

The game reportedly caused its first suicide in Russia in 2015. But the world really woke up to it in 2016 when a journalist drew attention to the macabre social media phenomenon through an article linking seemingly unrelated suicide victims.

Budeikin was eventually arrested and pled guilty to 'inciting at least 16 teenage girls to commit suicide,' but the phenomenon by then had spread to other parts of the world, including India. Within India, the states most vulnerable to the Blue Whale game are the North Eastern ones.

Not only are the top 3 slots taken by them, 6 of the 7 sisters of the North East are among the top 10.

Narrowing the search further to the cities shows another perspective.

At the moment, Kochi leads the list of world cities with the highest number of Blue Whale Challenge searches.

It is followed by Kolkata (which was on top for a while), and Thiruvananthapuram. Both West Bengal and Kerala have witnessed suicides and suicide attempts that appear to be related to the Blue Whale Challenge.

Of the top 50 cities in the world with the highest concentration of Blue Whale Challenge searches the top 32 positions are held by Indian cities. 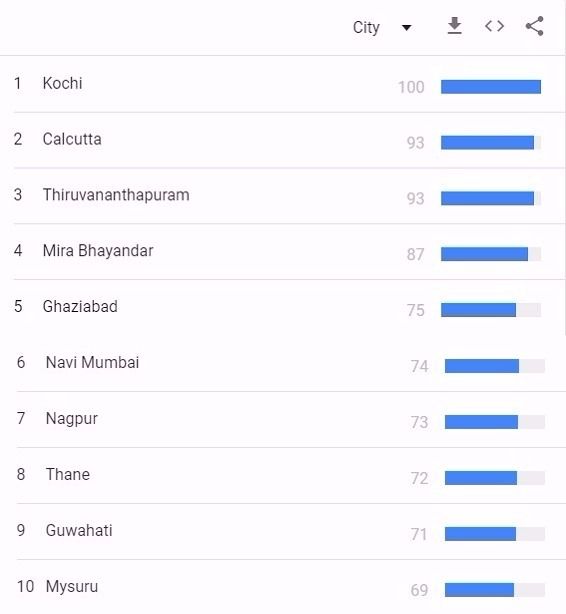 The only way to stop the spread of the Blue Whale game seems to be raising awareness about it and educating adults -- parents and teachers -- on how to watch out for the signs.

Union minister Maneka Gandhi has written to all school principals, asking them to sensitise teachers and students to the Blue Whale Challenge.

'In view of continued incidents of #BlueWhaleChallenge deaths, our Ministry has sought active role of schools in tackling the issue,' the Gandhi-led Ministry of Women and Child Development tweeted.

'The minister has issued letters to all school principals to sensitise teachers and students about Blue Whale Challenge. She has urged the teachers to be extremely vigilant about the behaviour of their students,' read another tweet.

The ministry of electronics and information technology had earlier directed Internet majors -- Google, Facebook, WhatsApp, Instagram, Microsoft and Yahoo -- to immediately remove the links related to the Blue Whale challenge.