Rediff.com's Rajesh Karkera and Hitesh Harisinghani spotted these beauties at the Auto Expo 2018. And we are not talking just bikes here ;-) 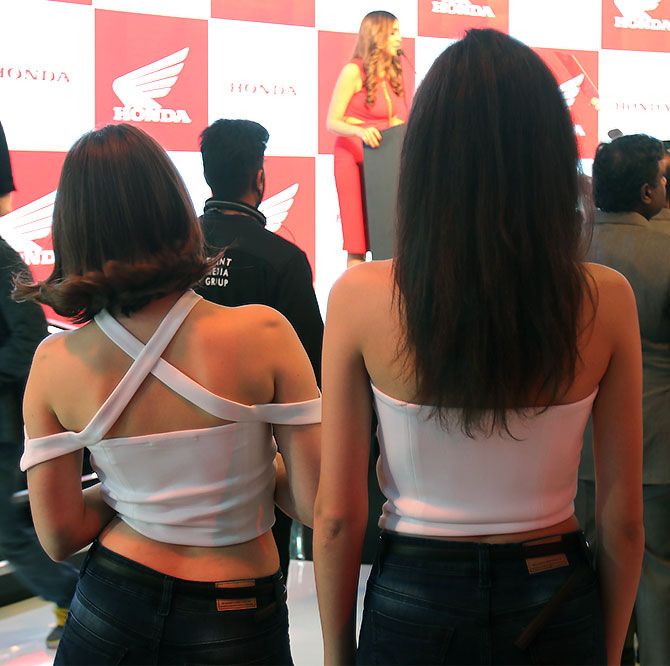 The Honda Pavilion was our first encounter with the beautiful models at the Auto Expo. 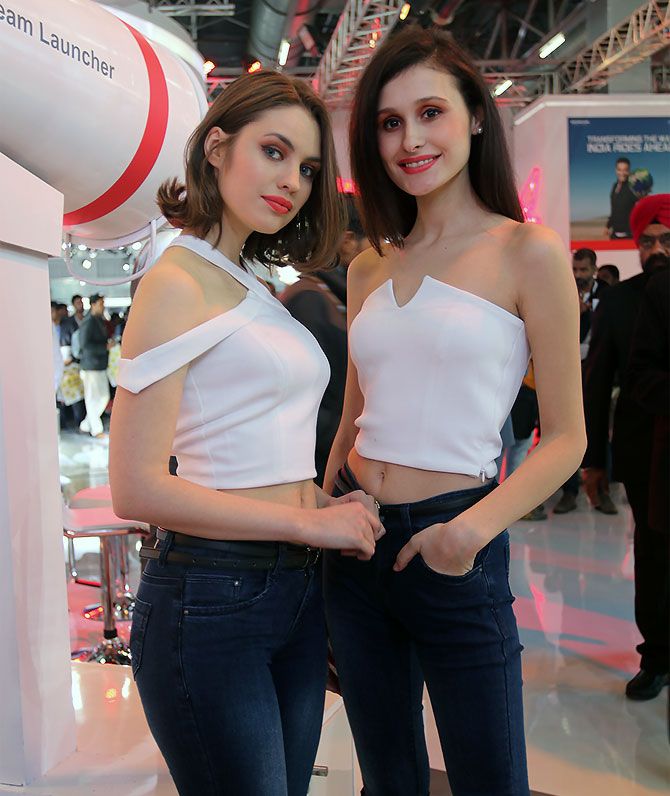 Meet Monique from Brazil and Rimma from Ukraine. It's Monique's first time in India and she loves all the attention.

This is Rimma's second visit. Amid an array of launches on the first day, Monique obliges our cameras and it is then that we see the bike she is standing with. An electric version of the Honda PCX 150, the new Honda PCX is equipped with a high output motor developed independently by Honda.

This electric scooter also comes fitted with a removable lithium-ion battery, which the company calls, Honda Mobile Power Pack:  A swappable battery that reduces the charging time for the owners of this bike.

Honda has actually brought the PCX electric to India just to showcase the swappable Honda Mobile Power Pack technology but I don't think it will be launched here anytime soon though. The CBR1000RR Fireblade SP is Honda's first ever motorcycle to come with semi-active(S-EC) suspension and lithium ion battery. 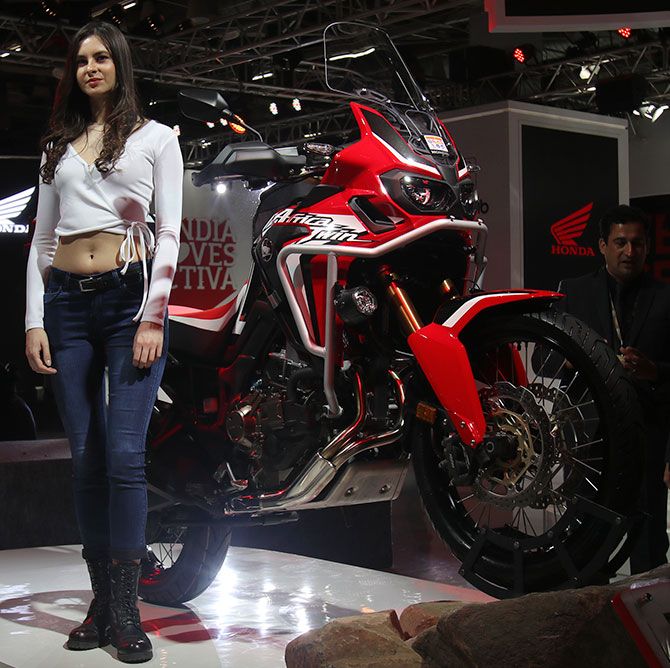 The Honda Africa Twin was launched a few months ago in India. This adventure bike got such a good reception in India that the first batch of 50 motorcycles sold out completely in the first week itself! 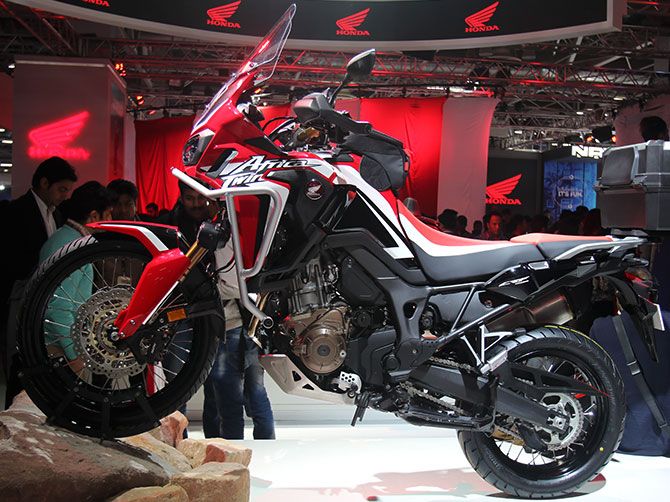 Here is another look at it sans the glam. Seen here is the Honda Goldwing Tour. This Goliath of a bike was recently launched in India and is priced at Rs 28.49 lakh, ex-showroom, Delhi 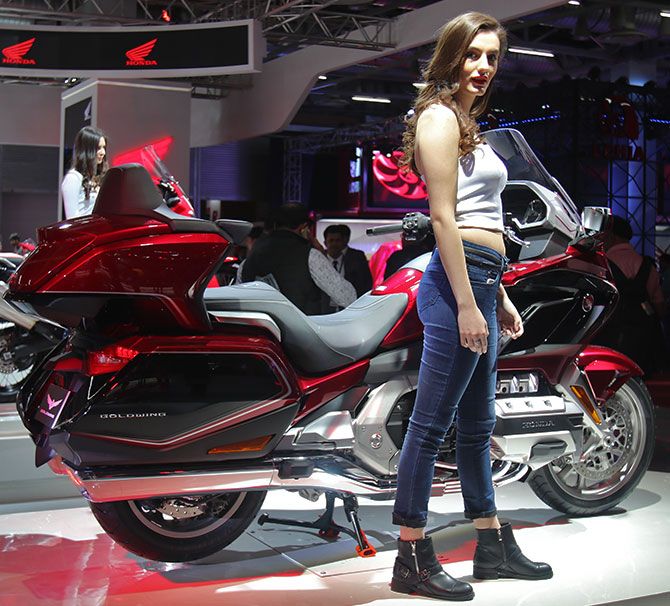 A cheaper version of the Goldwing, the standard Goldwing, is available for Rs 26.85 lakh.

The massive Goldwing is powered by a 125 HP 1833cc 6-cylinder, which is more powerful than some of the cars on our roads :) 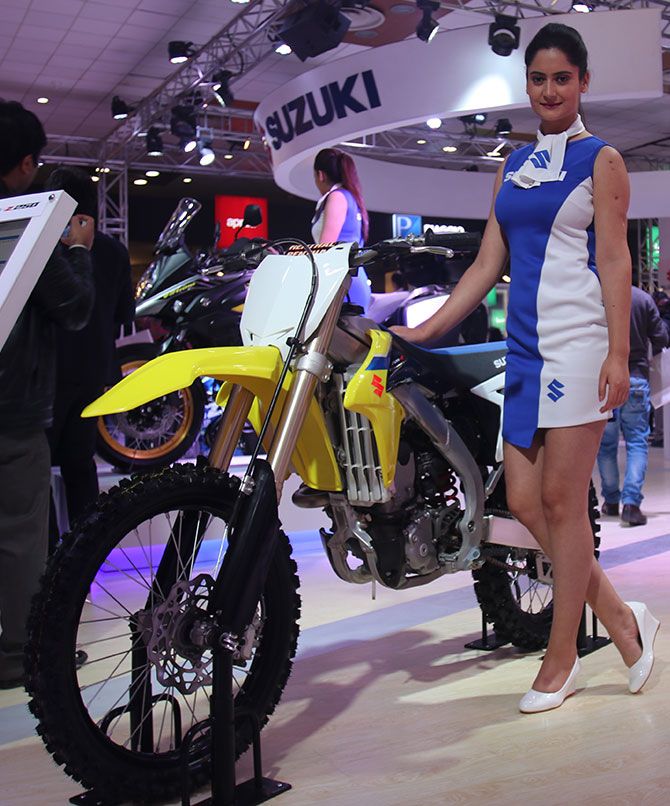 Moving on from Honda, the Suzuki Pavilion had a mix of Indian and foreign models and we are not just talking about the bikes here :).

They showcased 17 products ranging from city scooters to track racers.

Here we see a Delhi-ite with the Suzuki RM-Z 250 motorcycle. This model is meant for closed-course competition use only. 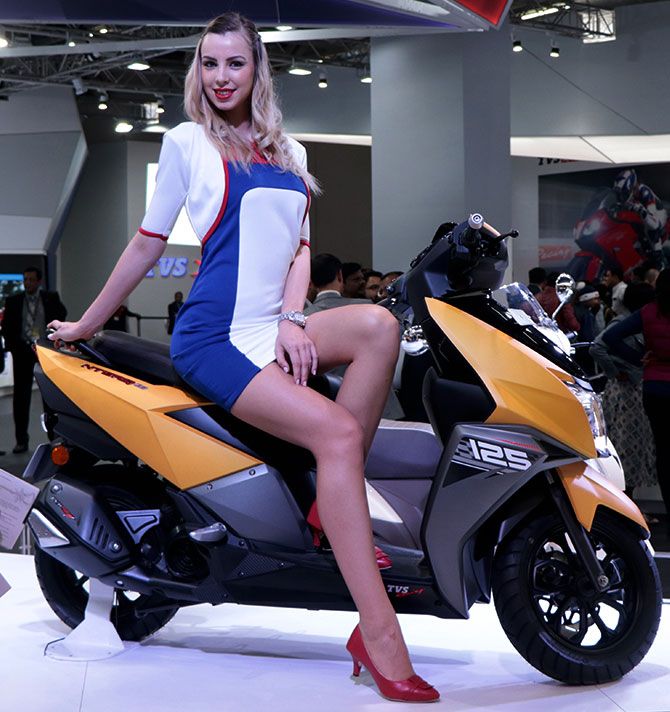 The NTORQ 125, a TVS Motor Company scooter for Indian roads is a stealth aircraft-inspired design.

It has a bluetooth connected speedometer, which shows you incoming calls and SMS alerts, auto SMS reply and a host of 30 new first time features.

This bike is launched on Indian roads for Rs 62,825 onwards. One of the iconic models from TVS, the Apache, was also displayed in its new avatar, the TVS Apache RTR 200 FI Ethanol Version.

The bike remains visually unchanged over the conventional version but gets the ethanol branding across the fuel tank. 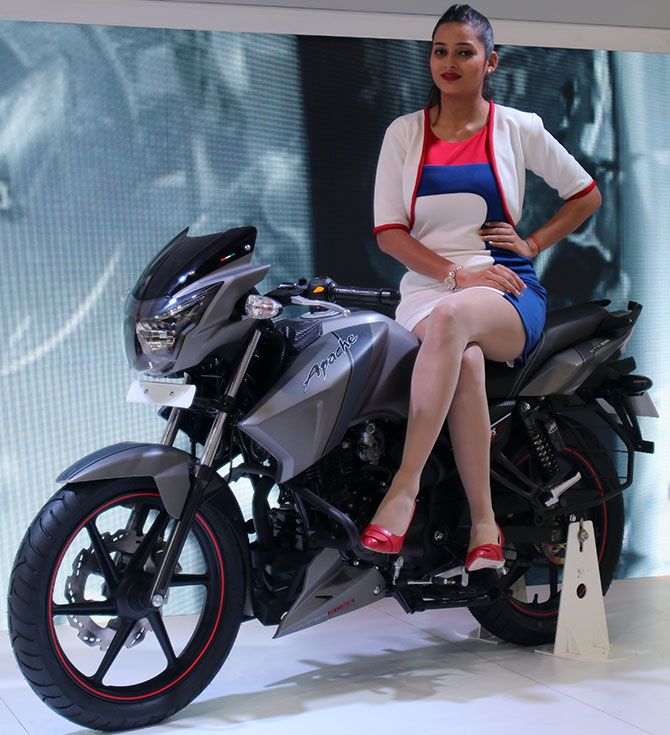 TVS also has its electric versions displayed at the expo. The impressive Creon -- the name means 'prince' in Greek. It has got the looks of an advanced scooter and is TVS's first step in the electric scooter space.

The first thing that will grab your attention is the sporty and sleek styling of the Creon with sleek LED lights and dynamic LED indicators on the apron. Look closer and you will notice details like the TFT screen, and aluminum perimeter frame.

Powering the Creon is a 12kW electric motor which is good enough to propel it from 0-60kmph in 5.1 seconds.

It also gets a fast charging option that tops up 80 per cent of the battery in just about an hour. 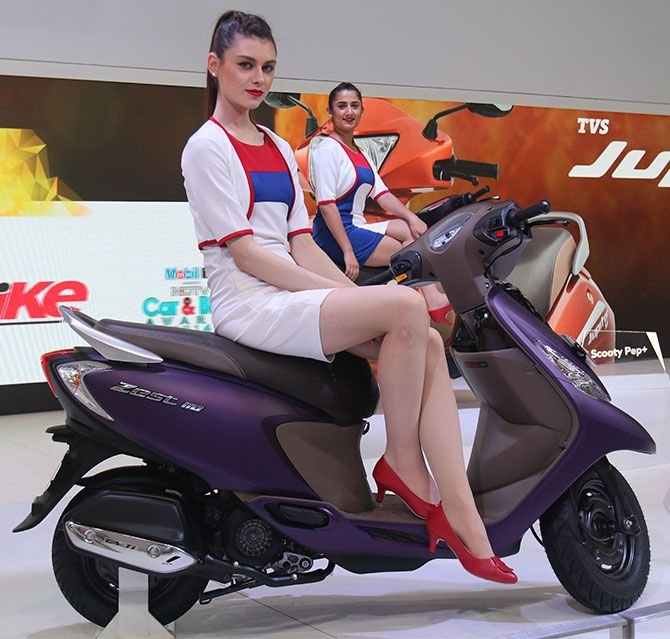 TVS also showcased its first ever cruiser concept at the 2018 Auto Expo, calling it the Zeppelin.

A raw and muscular 220 cc concept, if it does go into production, it could easily give tough competition to all the other 220cc cruisers available on Indian roads.

TVS says that the bike will get an integrated starter generator (ISG), which helps the bike to start quickly, giving it a boost.

The bike also gets a 1,200 watt regenerative assist motor with a 48 volt Li-Ion battery, adding to the overall performance of the bike with 20 per cent more torque when needed. 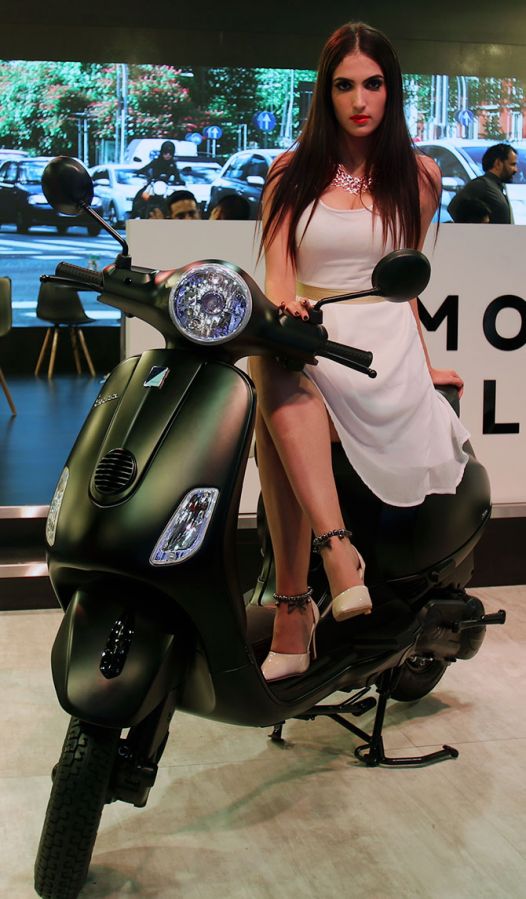 Vespa Notte displayed in an all-black avatar made a lot of heads turn. Was it the bike or the model accompanying it? A tough call to take, I suppose. 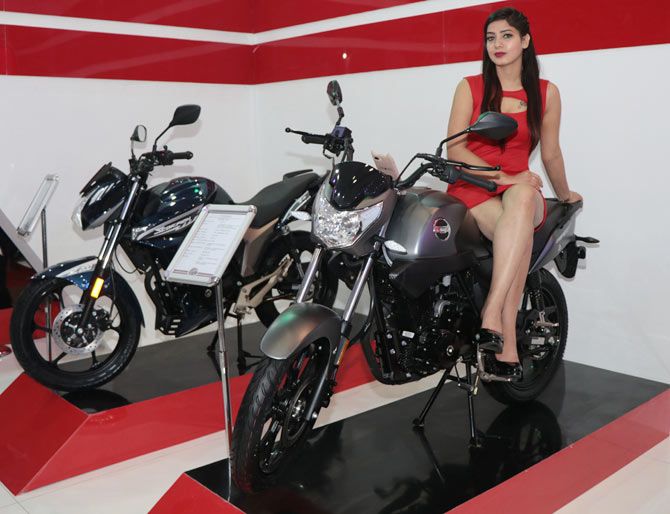 Aftec Motors, a motorcycle company I had not known ever existed, displayed some impressive range of commuter bikes to performance bikes at their stall.

The motorcycle also comes equipped with an LED tail light and turning light. The Aftek Zontes R250 is the company's flagship 250 cc motorcycle. This has a 6-speed gearbox. This also gets LED treatment at the front and back and it gets a digital instrument cluster.

The Zontes R250 can achieve a top speed of 145kmph according to the company.

They didn't give any pricing details or when the motorcycles will be launched.

But they did say that the company was showcasing its production-ready lineup here. Kawasaki has showcased the Vulcan S 650cc motorcycle which the company had earlier launched for Rs 5.44 lakh (ex-showroom, Delhi). The last motorcycle that we just have to show you is the UM Renegade Thor.

This electric cruiser first made its debut as a concept at the 2017 EICMA Show in Milan.

The electric cruiser is currently priced at Rs 9.9 lakh (ex-showroom, New Delhi) for the CBU unit with a battery range of 270km. 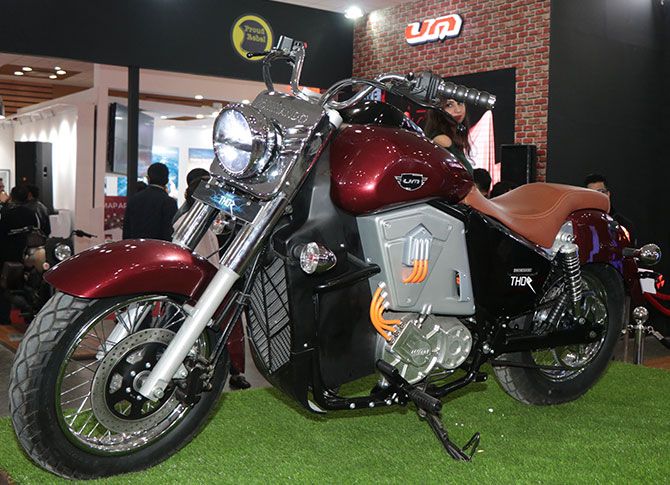 However, UM has stated that the company will soon bring a locally manufactured Renegade Thor at a price of Rs 4.9 lakh with a range of 71km (ex-showroom New Delhi).

Bookings are scheduled to open in April. But the deliveries will only start in 2020 :) 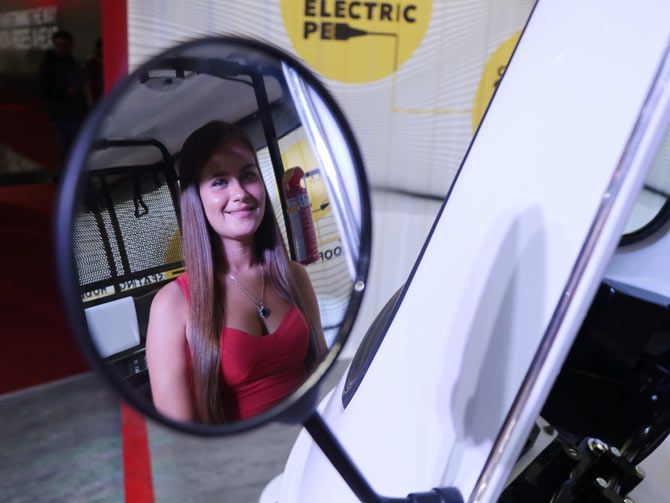 Auto Expo 2018 was not just about bikes. Three wheelers also got its fair share of glamour. It would have a Li-Ion battery, could run up to 30 km per hour and offers a mileage of 80 km. The future is colourful they said.