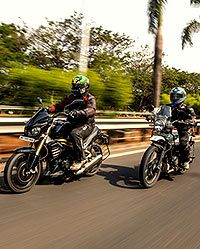 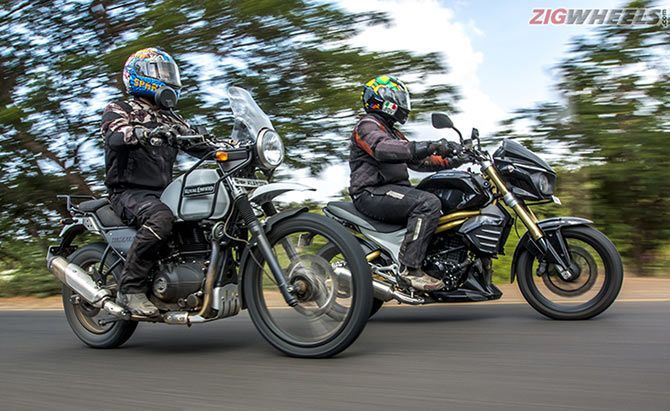 While Royal Enfield commands a healthy respect among majority of Indian bikers, the reality is that the manufacturer never had the best touring fleet, excluding its only cruiser, the Thunderbird. Its latest adventure tourer, the Himalayan, has changed the equation now.

Mahindra Mojo, on the other hand, is more of a road-ready machine with advanced technology but weaker off-road characteristics.

The company made great efforts for years to develop this highway muncher and the results are quite satisfying.

Here's how the two compare... 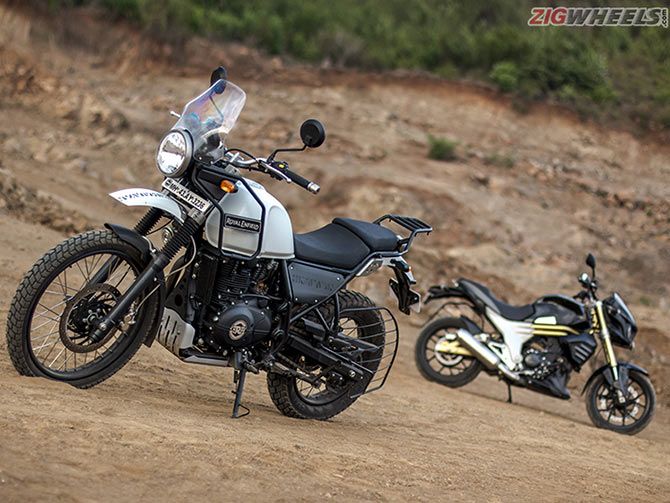 The Mahindra Mojo has been a part of our long-term fleet but failed to change my opinion about its unconventional styling. The bike has an unnecessarily bulky headlamp casing but a very minimalistic tail section, which makes it look way off in terms of dimensions. It is surely an eye catcher because of its huge appearance; however, we can't say that it is the best-looking motorcycle in its segment at all.

'Practical' is the word that we can use to describe the styling of the Royal Enfield Himalayan. It is a pure purpose-built motorcycle that still looks amazing with its minimal or, we can say, bare body design. With the mature adventure tourer characteristics, it looks strikingly beautiful and even looks great in the Snow White colour scheme. 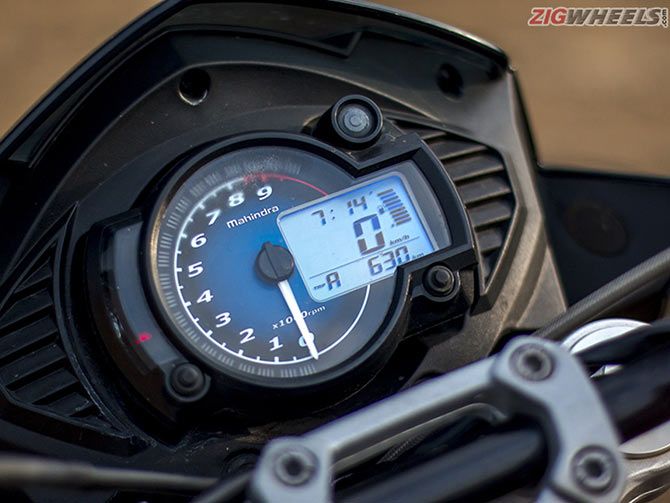 Both the Mojo and the Himalayan boast a semi-digital instrument console, however, the former gets a more modern and compact unit. The Mojo's console comprises of a fuel gauge, speedometer, trip meter, odometer and an illuminated tachometer along with some extra features like a shift light indicator and top speed recorder.

The Himalayan's unit is also very advanced with a lot of extra information like temperature, direction (compass), average speed and a service reminder along with the general features. However, the design of the unit is a bit confusing and the small tachometer also needs more attention, while the instrument cluster on the Mojo is comfortable to read on the go.

Both the motorcycles have an impressive quality of switchgear but the Mojo has also benefitted with the backlighting, making it easier to use in the dark. The adventure tourer gets some extra temptations like windscreen and MX-style claw footpegs as standard, while jerry cans, soft saddle bags, louder exhaust and aluminum panniers are optional extras. 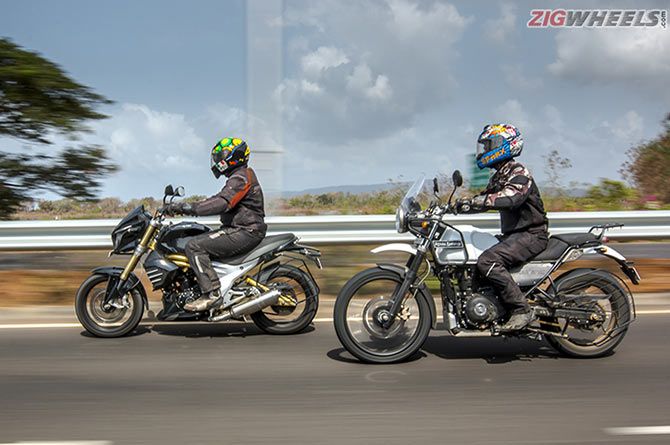 The Mahindra Mojo is powered by a 295cc, single-cylinder, liquid-cooled motor that makes 28PS at 8,000rpm and delivers a peak torque of 30Nm at just 5,000rpm. As you press the starter switch, the bike comes alive with a roaring sound from the dual exhaust mufflers.

It picks momentum quickly and accelerates faster than its rival and you will find the sweet spot of the engine between 100-130kmph, which is ideal for highway cruising.

The Mojo's engine is also more refined than the Himalayan's and the 6-speed gearbox works impressively as well.

Powering the Royal Enfield Himalayan is an all-new 411cc single-cylinder, air-cooled motor with an oil-cooler. It is a totally different engine as compared to those you have experienced on other RE machines.

The new motor develops a maximum power of 24.8PS at 6,500rpm and 32Nm of peak torque between 4,000-4,500 rpm. It is more advanced and refined than its siblings, but the performance is not as expected from a 400cc engine.

Although the good low range torque helps in city and off-road riding conditions, the cruising ability is not up to the mark as it starts losing steam post 110kmph. Another disappointment is the crude 5-speed gearbox which needs much effort in shifting.

Overall, the Mahindra Mojo clearly overtakes the Himalayan with respect to performance and engineering refinement. 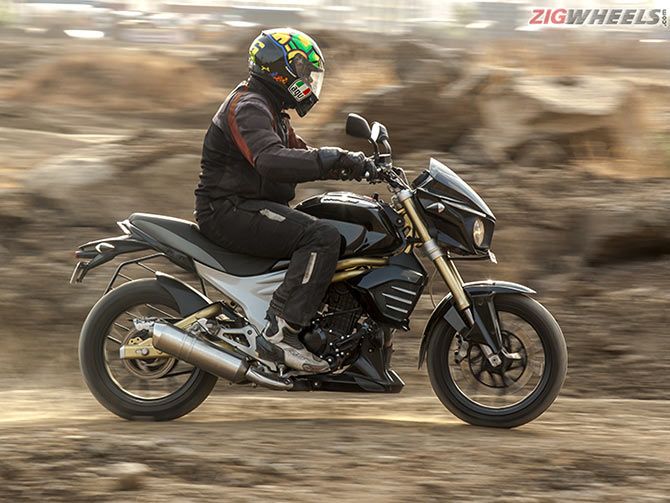 Another common feature in both the motorcycles is an upright and comfortable riding posture. However, the seat height of the Himalayan is a bit lower, thanks to the scooped-out saddle, as compared to the 814.5mm of the Mahindra Mojo.

Despite the poor weight distribution, the supreme quality Pirelli tyres make the Mojo feel more confident in attacking the corners. However, the tarmac-specific tyres struggle for grip on the trails. 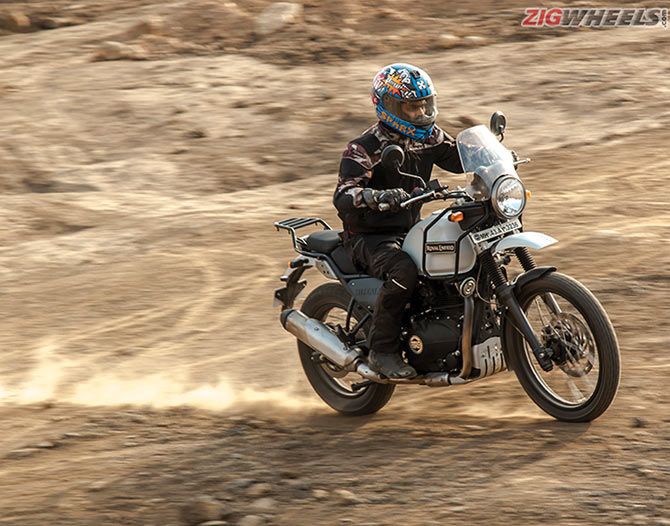 On the other hand, the knobby CEAT tyres of the Himalayan restrict performance on tarmac, while feeling more enthusiastic on off-road sections.

The best thing about the bike is its compact and nimble construction which is perfect for off-roading beginners.

Standing on the motorcycle feels natural and one can comfortably hold the tank as you negotiate gravel, sand, potholes, boulders or whatever the surface is.

The long travel suspension set-up of the Himalayan, 200mm front telescopic forks and 180mm rear monoshock, allows the rider to jump over surfaces. The confidence of perfect landing comes with the large 21-inch front wheel.

Despite the Pirelli rubbers struggling for grip, the ride quality of the Mojo over undulations is impressive due to the soft suspension set-up comprising of beefy USD front and the rear monoshock with internal floating piston.

Both the bikes get disc brakes on both ends and miss out on ABS. But the braking performance of the Himalayan is slightly better despite the Mojo having the largest discs in the respective segment. 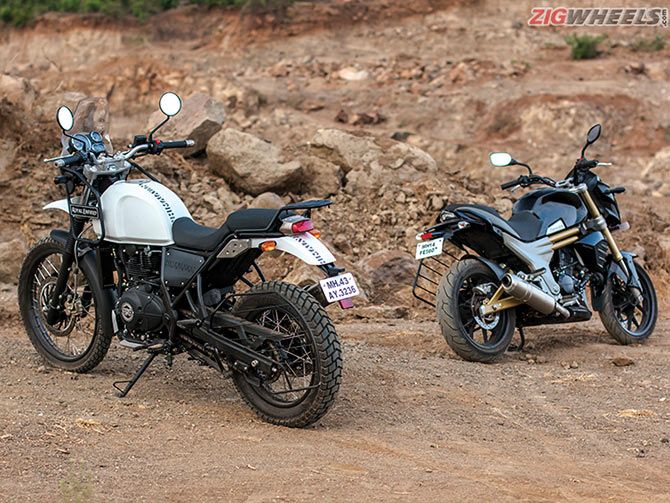 Both the bikes come with the ability to be used as daily commuters besides being your weekend tourer. Here, the Himalayan gets some advantage as it feels nimbler despite weighing 15kg more than the Mojo (165 kg).

Thanks to the great weight distribution, the Himalayan slices its way through traffic with confidence, while it is a tiresome task with the Mojo at low speeds due to its heavy front. But the liquid-cooling system on the Mojo worked superbly unlike the Himalayan's motor that gets heated up a bit during heavy traffic conditions. 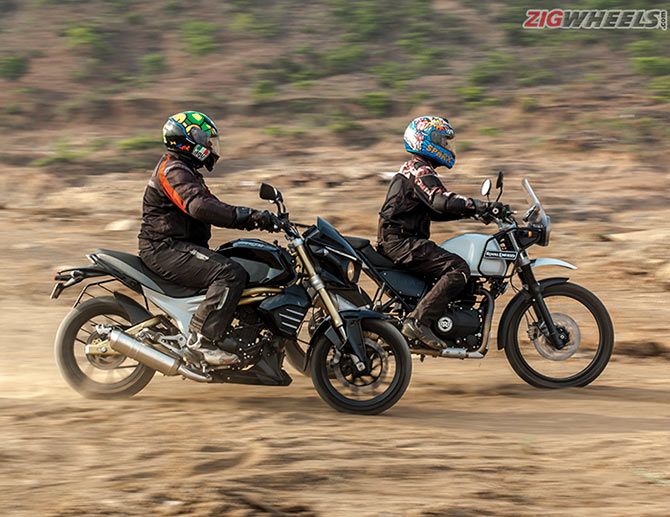 The tall side stand on the Himalayan also helps to park it in lesser space and also to pull it out from the parking lot, while pulling out the Mojo takes too much effort. When it comes to fuel efficiency, the Mahindra Mojo returned an overall figure of 27kmpl, giving it a range of 570km with its gargantuan 21-litre fuel tank.

The Himalayan has a smaller 14-litre fuel tank, still providing a range of 502km with a better 33.5kmpl overall fuel efficiency figure. The split seat of the Himalayan provides more room for the pillion even after loading it with luggage panniers.

Reliability still remains questionable as both the bikes are new to the market. However, when it comes to riding in remote locations, the RE can be a smarter choice as the carburetted motor is easier to fix than the FI unit on the Mojo. Also, the availability of service network and parts are better with Royal Enfield. 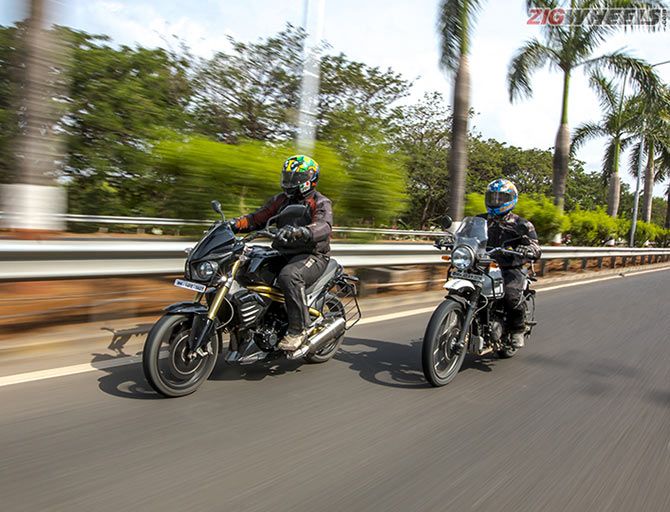 With the powerful motor and a good list of features, the Mahindra Mojo is a good option for young executives who are looking for a large capacity motorcycle under Rs 2 lakh.

The Himalayan can be a ride for enthusiasts who were waiting for a true adventure tourer motorcycle that doesn't eat into their pocket much. Besides that, the lot of existing Royal Enfield customers who like travelling and are willing to step aside from tradition further gives it a larger target base.

Starting from college students who want a standout motorcycle to motorcycle wanderers and mature riders, the Himalayan has a wider appeal that further increases with the Royal Enfield logo. 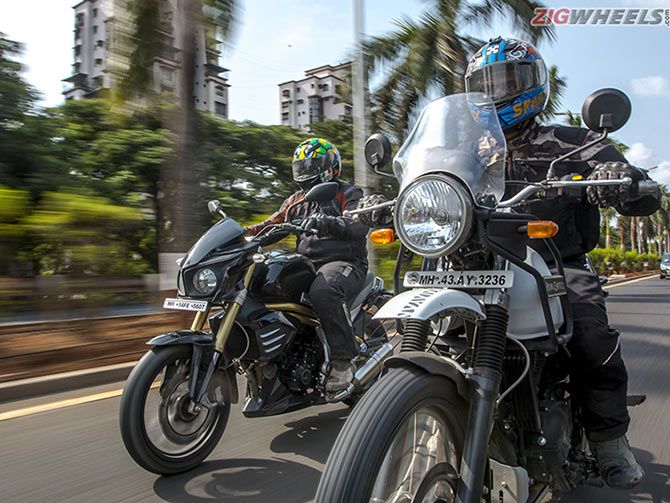 Talking about the cost, the Royal Enfield Himalayan has been priced at Rs 1.55 lakh, while the Mahindra Mojo will set you back by Rs 1.63 lakh (both prices are ex-showroom, Delhi). There is hardly any noteworthy difference between the prices of the two motorcycles. So, it cannot be considered as a deciding factor at all.

When it comes to solving the purpose of touring in a better way, the Royal Enfield Himalayan is a clear winner here.

Keeping in mind the facts that Royal Enfield has a better service network and the Himalayan is also an easier bike to fix, it makes more sense as a tourer.

Also, the versatility of the bike makes it a better all-rounder product and its go-anywhere characteristics are exactly what is needed to be a perfect touring motorcycle.