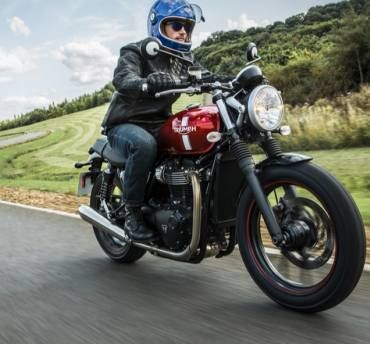 The Triumph Bonneville Street Twin has never been about exploring your bloodlust at the top-end. Hit the open road, open the taps and the Street doesn’t hold back, says Ravi Ved. 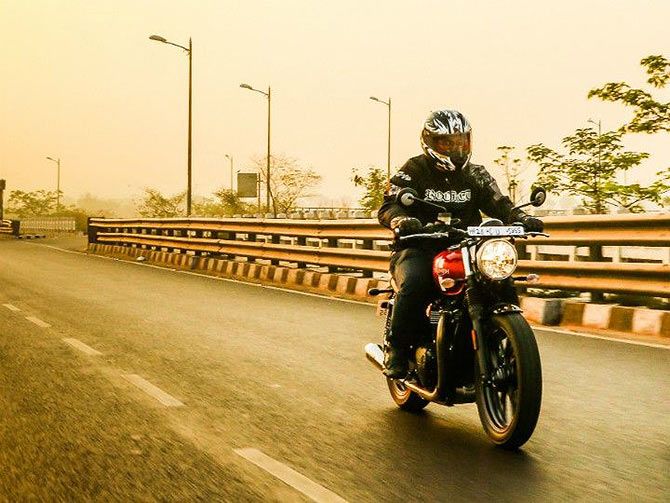 The Bonneville salt pan has long been the Mecca of speed demons around the world. Home to several land speed records, this place has no lack of achievements to brag about. One laurel that stands out though is the fact that it is the namesake of one of Triumph’s most legendary models. The Bonneville takes its name from the North American state of Utah, but is one of British motorcycling’s ‘hall of fame’ models.

Offering an applauded balance of performance, comfort and tractability, the Bonneville has kept up with the times while always showcasing the pride of its heritage. The bike went out of production in 1988, but was brought back to life in 2001 and today is with us as the all-new Street Twin. 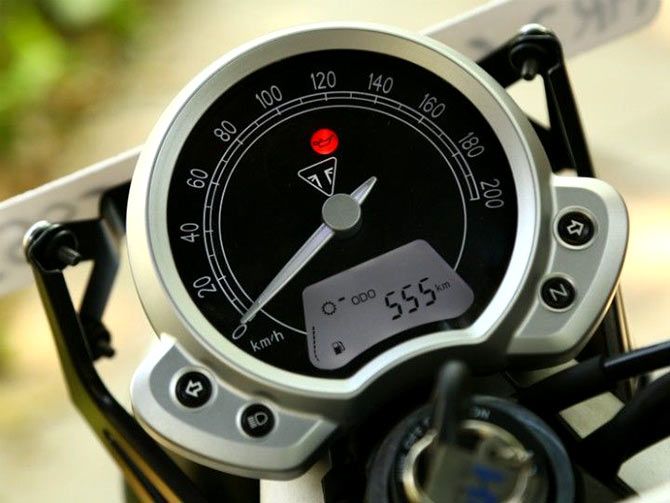 Now when we say all-new, we really mean it! From the chassis and engine to the instrument cluster and ride-by-wire throttle, everything is straight out of womb and you now get traction control too. However, while the tech-kitty gets inflated, subtlety is still an integral part of the Street Twin’s personality. That list on the feature sheet is meant to be felt rather than seen as it takes a keen eye to notice the new-generation additions.

Does it still have the retro vibe that we love? You bet, but where the old Bonnie looked like something out of the seventies, this one looks like it was built for today with the attention to detail that’s been consistent through the ages. As expected, the design is quite simple and straightforward with universal appeal. A flaming red tank with an offset fuel filler cap dominates the view, with classic pin-striping just above the Triumph name.

Look closely and you’ll spot a Triumph logo shaped headlight bulb that adds a bit of flair to the front, with a cast headlamp bracket to balance things out with a modern touch.

Delicate seat contours shape the saddle and lead to a tail bereft of grab handles. Move to the rear and an oblong housing with a circular standalone LED brake lamp provide a gentle finisher. The piece de resistance though, sits under that scarlet tank as we say hello to the first ever liquid cooled engine to grace the Bonneville, with the parallel twin motor finished in black with twin exhausts. It’s ridiculous how the design manages to get you salivating while remaining so simple. Not to mention, there’s no compromise on quality either. 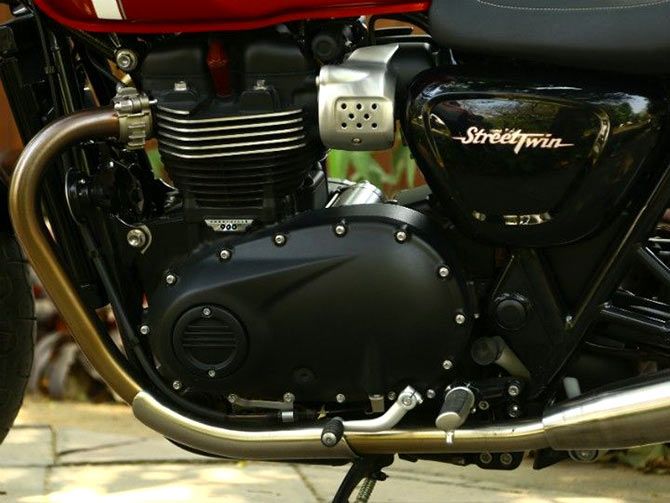 The Street Twin’s heart displaces 900cc as compared to the 865cc of the old bike, yet oddly enough, the peak power stands at 55PS; 13 less than the previous generation. Don’t be disheartened though and keep an eye on the little ‘HT’ tag emblazoned on the engine as it stands for 'high torque'. What it lacks in power it more than makes up for in torque, with the grunt down low going up from 68Nm to 80Nm!

Swing a leg over, and you realise the seat is quite low. At 750mm it feels apt and even shorter riders can use this bike with their feet firmly on the ground. The seating position is relaxed and comfortable, with the handlebars set slightly low with an arm’s length between the two ends. What this combination gives you is the confidence to ride the Street Twin all day without a complaint from your hind quarters.

Like before, the instrument cluster doesn’t have a tachometer, but the digital screen housed in the speedometer tells you all you need to know. It even houses a fuel gauge unlike its Italian counterpart, the Ducati Scrambler. You also get a gear indicator and two trip meters along with a distance to empty readout and data on your average fuel consumption. 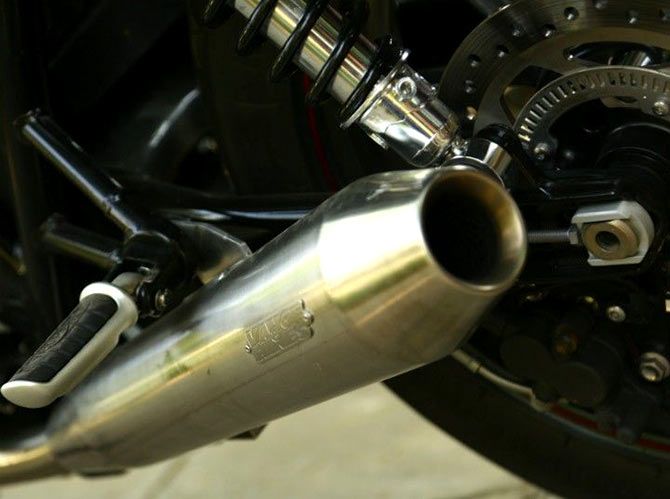 Titillating our ears was the optional Vance & Hines exhaust system we had on our test bike. Fire the bike up and the engine wakes up with the quintessential British parallel twin rumble. When you’re done admiring the exhaust note just prod the gear lever and it slots into gear, it’s that smooth and easy. The lever itself has very little travel and shifting gears is a treat. The Bonneville has never been about exploring your bloodlust at the top-end. It has a lot of torque from the word go and loves to play with it. To put it into perspective, you can easily potter around in third gear at 40kmph. The assisted clutch aids two-finger shifts and helps you look smug as people pass bewildered stares as to how you can be so comfortable on a 900cc bike in city traffic with heat dissipation from the engine managed well too.

Up front, you get 41mm Kayaba forks while the twin rear shocks provide 120mm of travel. The old Bonnnie was rather stiff, but here, even bigger undulations don’t catch the bike off-guard, nor do the trekking sites we call speed breakers (unless you have a pillion). Hit the open road, open the taps and the Street doesn’t hold back. The bike surges forward with vigour and gives you a reassuring jolt of torque past the 3200rpm mark. The suspension keeps up well with Indian road conditions and the bike feels surefooted and confident even while gathering speed quickly. 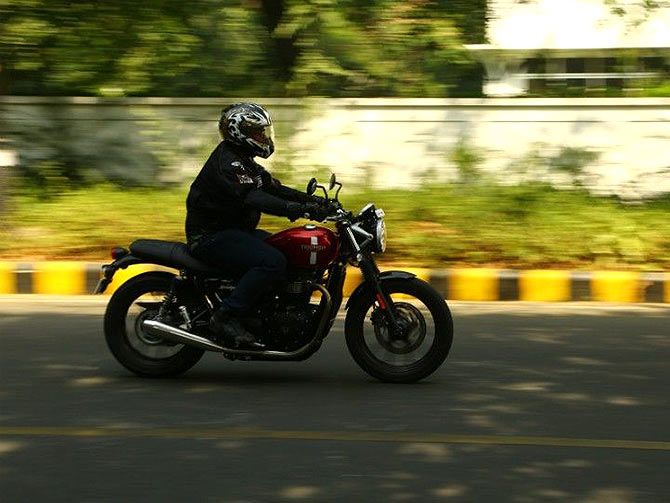 No, it hasn’t got superbike levels of flick-ability, but throw it into a corner and it complies without any hesitation. The slightly low set handlebars mean you can hang off the bike without feeling awkward. Grip from the Pirelli Phantom rubber though is adequate at best. A set of Metzelers would work wonders for the Street Twin’s handling, though they come at the expense of the classic look. The Street Twin employs a single disc up front, yet the brakes work well and provide plenty of stopping power, though there’s a lack of feel.

The 2016 Street Twin is the kind of machine you can ride to work every day while still being the steed you need when you get tired of the daily grind and want to slap on those saddle bags and hit the road. It continues to be the balanced package the Bonneville has always been, while a host of new additions ensure that this new-age offering keeps the modern biker happy and hungry for the highway.