The GSX-R1000 is now on offer in an all-new, even more lethal avatar, laced with an ultra-modern electronics suite. Arun Mohan Nadar got first taste of the bike at the Kari Motor Speedway in Coimbatore. 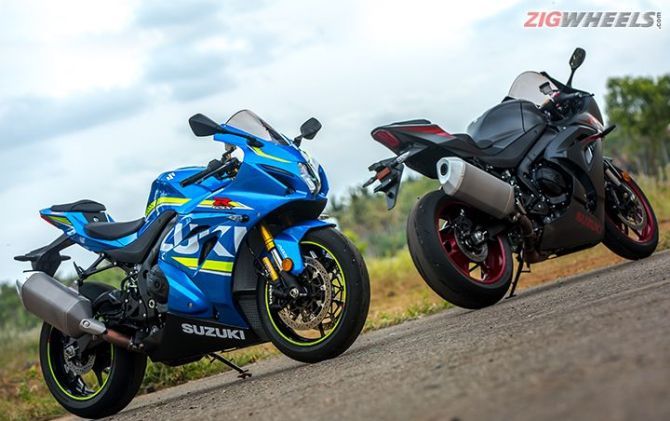 The 2017 Suzuki GSX-R1000 is among the most popular names in the world of superbikes. It is Suzuki's flagship litre-class machine and is widely regarded as one of the best sportsbikes money can buy.

In production since 2001, the 'Gixxer' as it is known popularly the world over, got its last comprehensive update a decade ago, back in 2007.

The superbike world has sure moved ahead since then, and the GSX-R1000 was getting overshadowed, especially in the electronics department.

The Hamamatsu-based manufacturer has responded in style though, with an all-new GSX-R that broke cover internationally last year. The new Gixxer is completely new, be it in terms of the design, electronics or mechanicals. And unlike its rivals, for instance the Ducati 1299 Panigale and the Yamaha YZF-R1 that are more focused towards track riding, the Suzuki was considered equally good on road and track both.

As I packed in my race suit before heading to Coimbatore to ride the new Suzuki GSX-R1000, I wondered, will the new bike retain the above qualities or are we in for a surprise? 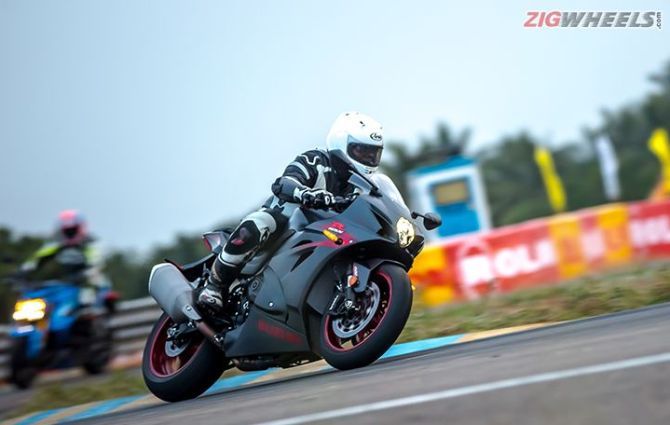 Let's focus our attention first on the new motor that sits behind the sculpted bodywork. The briefing for Suzuki engineers was to make the new motor more compact, lighter and of course more powerful.

The boffins at Suzuki achieved this by increasing the bore from 74.5 mm to 76 mm whereas the stroke has been reduced by 2.6 mm at 55.1 mm.

Suzuki has employed a new finger follower system as opposed to a bucket tappet valve train system which it has developed for its MotoGP machine. The new valve train system has helped in weight reduction while also allowing the redline to be raised by 1,000rpm to 14,5000rpm. Another noticeable addition to the engine is the new variable valve timing system (SR-VVT in Suzuki lingo) which the Japanese giant claims is similar to its GSX-RR MotoGP bike.

The centrifugally operated system is built into the intake cam sprocket that uses 12 steel balls and slanted grooves which rotate the cam sprocket position on the camshaft for better intake. Since the system works on centrifugal forces, one doesn't have to employ external power to actuate them.

Also Suzuki engineers have added servo-operated butterfly valves into the header balance tube which remain closed to improve low-end and mid-range performance but open at higher revs to increase the volume of air and reduce back pressure, thereby adding more power at the top-end.

The bike also features a secondary injector that is located on top of the airbox so that power delivery is constant even till redline. 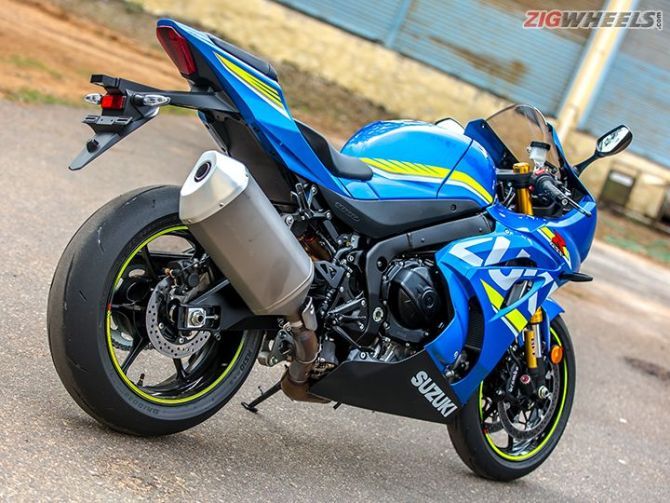 All the updates to the motor made their presence felt i mmediately as I got on to the race track. The first thing one notice is how crisp the throttle response is from the ride-by-wire throttle.

I was riding at higher gears carrying low speeds in my sighting lap and the engine felt smooth and tractable without any knocking.

Once on the straight, I rolled in the throttle and the bike shot off the line to offer blistering acceleration. 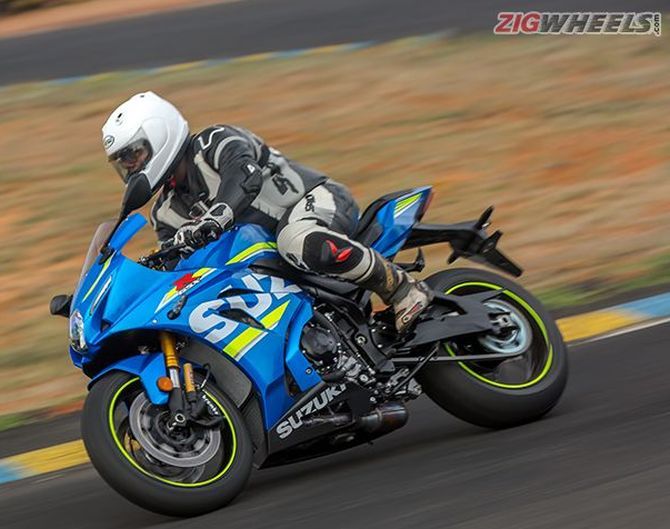 The engine loves to be revved hard and the power delivery throughout the rpm range is linear and smooth.

One aspect that really impressed was the top-end performance of the 2017 GSX-R1000 as the engine never ran out of steam once you crossed the 10,000rpm and the pull from the motor can be felt till the redline owing to the new SR-VVT.

This flexible nature of the engine in low-end and top-end should make the new GSX-R1000 easy to ride on the street as well.

I was clocking over 200 kmph by the end of the straight and the motor hardly felt stressed while the sweet melody of the inline motor in the background made the experience even more memorable. 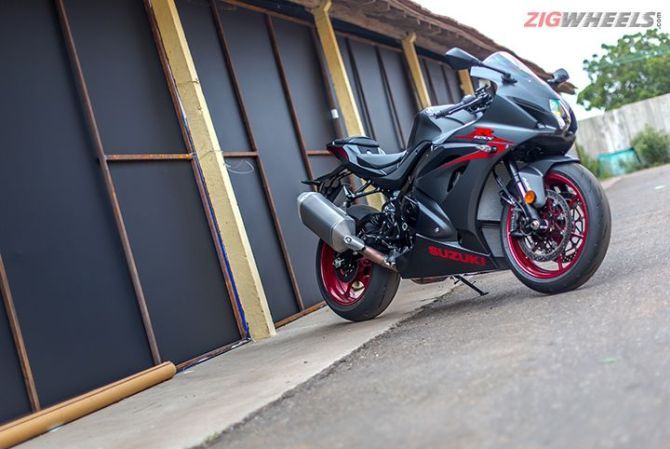 The exhaust note isn't too loud owing to the Euro 4 norms but then again you always have the option of opting for an aftermarket unit to enjoy the inline four symphony.

Refinement levels of the new motor are among the best in the segment, with hardly any vibes being passed onto the rider despite the missing balancer shaft.

The 6-speed gearbox worked like a charm and on the GSX-R1000R you also get bi-directional quickshifter (standard on R model, optional for base) which performed brilliantly and added to the track experience. Swing a leg over the bike and you i mmediately notice how compact the new GSX-R1000 is. This can be credited to the new frame that is narrower by 20 mm in comparison to the older bike.

Clip-on handlebars and rear-set pegs mean that the riding position is leaned forward and sporty.

I must add that it isn't as aggressive as the Ducati Panigale and a good balance between sporty and comfy.

While most modern sportsbikes feel cramped, the Suzuki felt spacious for the rider to move around which helped me with my hefty frame. 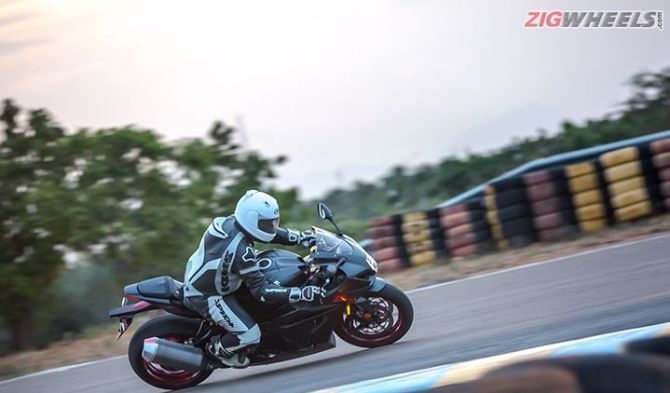 The new GSX-R1000 gets a redesigned aluminium chassis that is 10 per cent lighter than the older bike while the rear subframe is a kg lighter.

Wheelbase has increased from 1,405 mm to 1,420 mm while the new bike is lighter by 3 kg at 202 kg for the standard variant while the R tips the scale at 203 kg. The engine bank angle has been reduced by 6 degrees and this meant that the engine could be moved more forward and this meant the swing arm length could be increased by 40 mm for better stability without affecting the wheelbase drastically.

Kari is renowned for its tight corners and the new bike relished this opportunity to showcase its agile nature as you flip it through chicanes rather effortlessly.

Sadly for us, the tarmac surface on the fast flowing corner was damaged and we couldn't test the handling dynamics of the bike thoroughly.

The Suzuki GSX-R1000R employs top-spec Show BFF (Balance Free Front) forks at front and according to Suzuki they didn't give the bike semi-active suspension as they found the performance of both the suspension units to be similar while the latter was adding to its kerb weight. 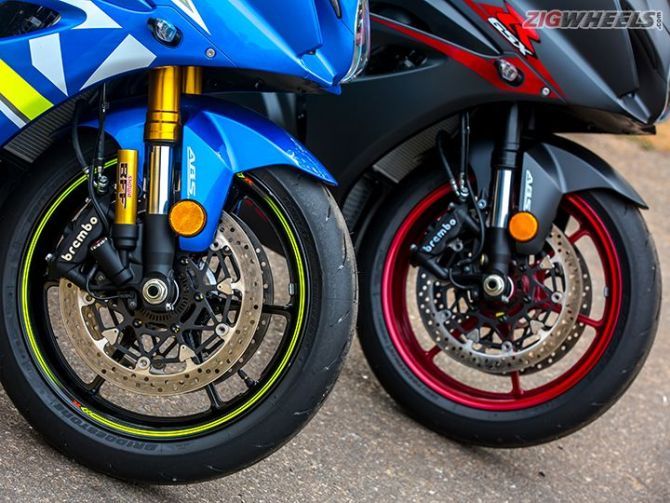 The base Suzuki GSX-R1000 rides on Showa BPF (Big Piston Front) forks and on the bumpy surface of the track it was the GSX-R1000R that felt easier to ride as its front-end felt more communicative and absorbed the undulations better without unsettling the front-end.

Both the bikes feature Brembo 320 mm-dia disc at the front which is 10 mm larger in diameter than the older bike.

Braking performance is decent with good bite but we would have preferred to see the Brembo M50 Monobloc calipers on the R version at least. Also, Suzuki has employed rubber lines instead of steel-braided lines which meant the brake lever went spongy and I had few scary moments on the track while hard braking. 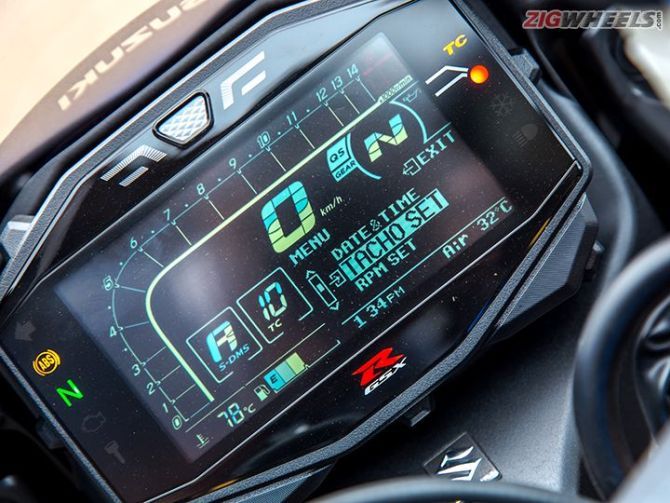 The new GSX-R1000 and GSX-R1000R have been loaded to the brim with electronic goodies which has become so essential in modern sportsbikes given the 200PS power output.

Both the bikes feature 3 ride modes which modulate the throttle response while offering full power, 10-level traction control, slipper clutch, and cornering ABS, while the GSX-R1000R gets bi-directional quickshifter and launch control as standard.

Mode 1 to 4 in the traction control offers some level of rear-wheel spin and is suited for the track, while 5-8 level is for mountain roads and street riding, and 9-10 is where the intrusion of electronics is maximum and better suited for wet conditions. 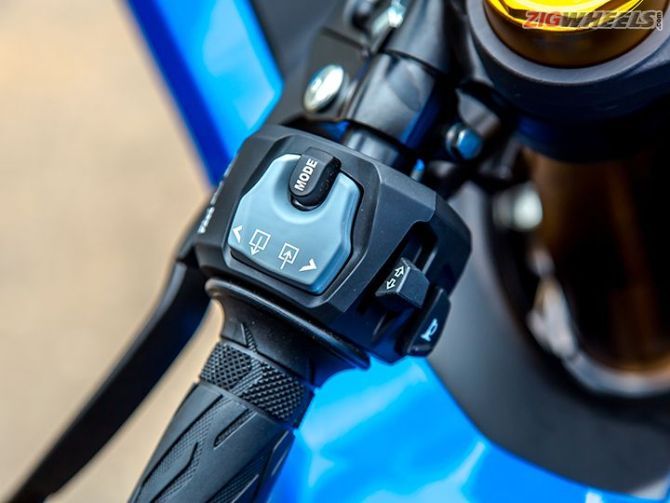 I was riding on level 5 as the tarmac condition wasn't great and found the intrusion very smooth.

I couldn't play with the settings as track time was limited and we will have to wait for a proper road test to see how the electronics on the new bike perform.

Both the bikes also feature IMU (Inertial Measurement Unit) which tracks the motion of the bike on 3-axes -- pitch, roll and yaw, to optimise the performance of the electronic aids. The design language of the new bike has been inspired from Suzuki's MotoGP machine.

The fairing is sharper and sportier than its predecessor and in the flesh one will be amazed by the compactness of the motorcycle.

The headlight is a LED unit which is much smaller than the older bike while the LED DRLs above the intake ducts look cool (only on the R variant).

Mirror-mounted turn indicators have been given a miss for a more conventional fairing-mounted LED unit.

Aerodynamics have played a vital role in dictating the styling of the bike and it has the lowest drag coefficient for a production bike.

The only design grouse for me is the huge exhaust muffler that looks out of place on a well-executed design but, as we mentioned before, it can be easily replaced with an aftermarket unit. 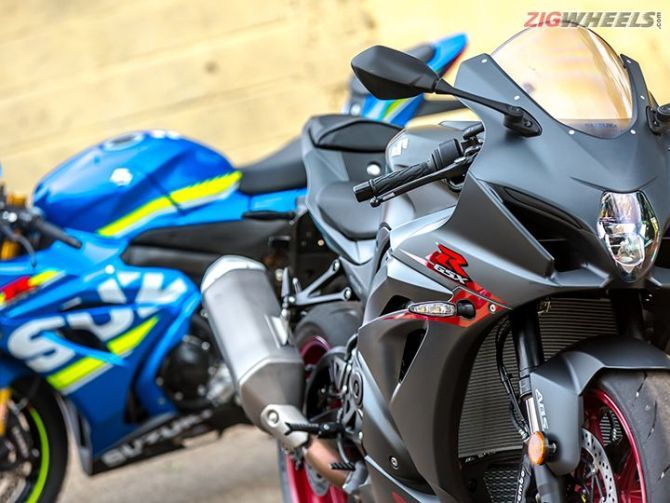 It gets a fully digital instrument console as opposed to the semi-digital unit on its predecessor.

The instrument panel is loaded with plethora of details but I felt the layout is cluttered. Also, the display is an LCD unit on both the bikes whereas the R gets a black background.

In today's day and age a TFT screen is the norm at this price point as the LCD unit feels outdated already.

As expected from Suzuki, fit and finish levels along with switchgear quality is of the first order and the bike feels premium from all ends. All the updates that have been made on the new Suzuki GSX-R1000 and the GSX-R1000R are in the right direction. The bike now feels ready to compete against its rivals from both Japan and Europe.

The new engine with VVT technology has to be the most noticeable update owing to its seamless power delivery throughout the rev range.

The visceral performance will paste a wide grin on your face every time you whack open the throttle.

Electronic aids provide the rider with assurance and the sweet handling dynamics of the bike hikes its appeal further. 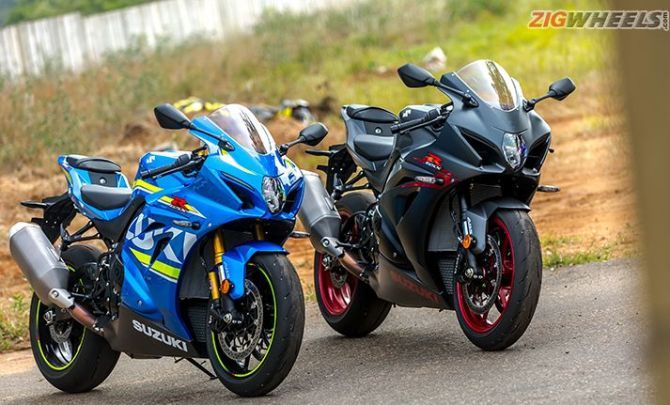 The new GSX-R1000 can be used for both breakfast rides and track days given its comfortable ergonomics, something that not many current sportsbikes can stake a claim to.

The only problem that we see for the Suzuki GSX-R1000 and the GSX-R1000R is their asking price of Rs 19 lakh and Rs 22 lakh (both ex-showroom, Delhi), which makes it among the most expensive litre-class machines on sale in India.

But cost aside, the new GSX-R1000 is a worthy successor to a legendary bike.