Bhimbetka caves tell a story, one that dates back centuries

All noise seems to fade away at Bhimbetka caves that seem to cast a magical spell on visitors, says Anjuli Bhargava. 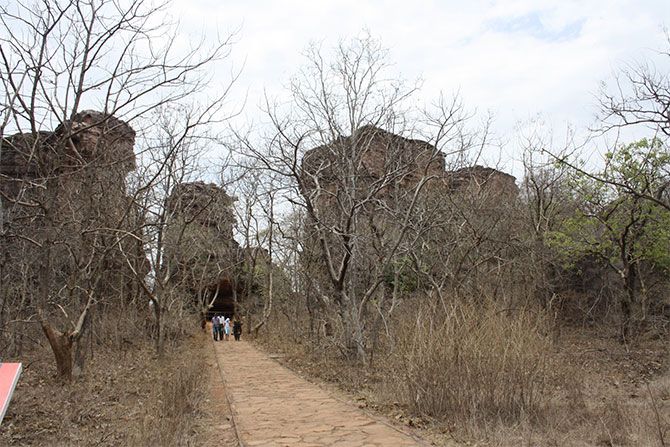 I am standing inside the auditorium. Normally, that would be nothing out of the ordinary except that this auditorium is made of gigantic craggy sandstone, has no sound system to speak of and is surrounded by 880 sq km of forest that's home to a range of wild animals including the tiger.

The only sounds are of nature -- the breeze, birds and animals.

The auditorium hasn't hosted any performances in a while -- it has largely remained unused for the last, well, several years. 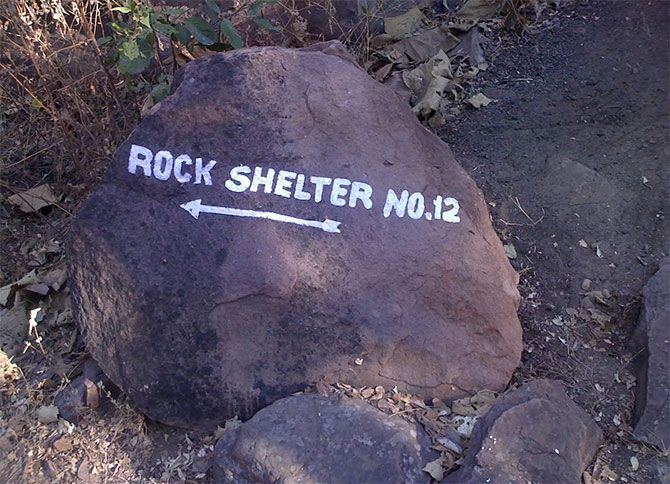 The Bhimbetka rock shelters 'auditorium' -- one of the first caves one enters when at this UNESCO World Heritage Site -- is, in fact, quite unlike anything I have seen before in India.

Just 50 km away from the hustle bustle of Bhopal in Madhya Pradesh, the caves seem as far removed from the real world as they might have around 100,000 years ago, when the first humans came to live there, the earliest evidence of human life on the Indian subcontinent.

There are over 700 rock shelters in the region -- all in the Ratapani Tiger Reserve -- but only around a dozen caves are open to the public. 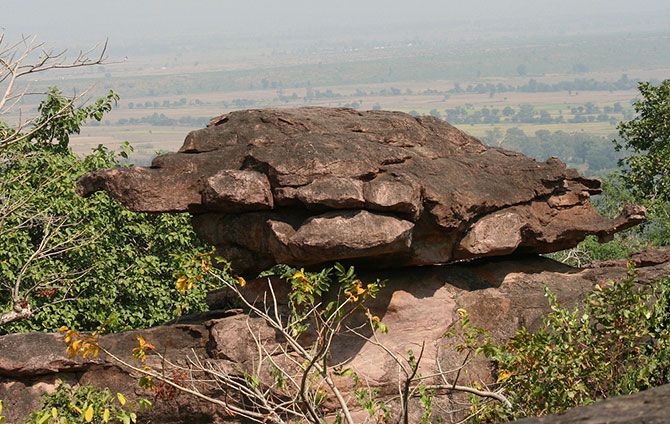 For something that's been around for rather long, the Bhimbekta caves were actually discovered quite recently in 1957 and were declared a UNESCO World Heritage Site only in 2003.

The discovery of the site happened more or less by accident and all credit goes to W S Wakankar, an Indian archaeologist who happened to be travelling in the region and stumbled upon the rock formations. 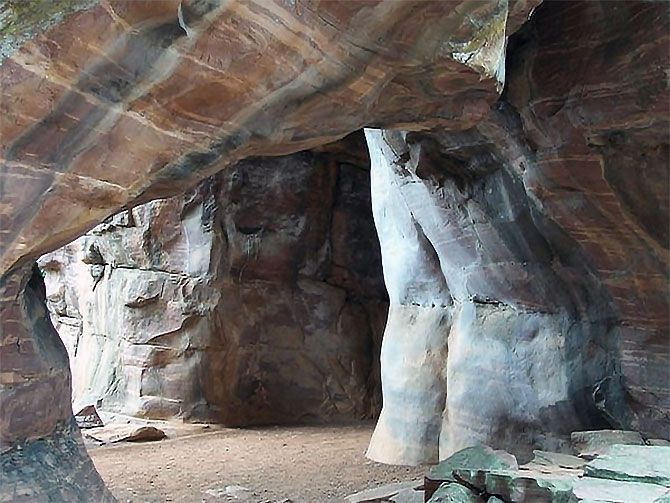 The rocks and shelters are smooth, tall and imposing and can only be described as mammoth in size.

Although natural, the caves appear like they have been carved to protect their inhabitants from natural elements.

And though it is hard to picture it in today's concrete world, close to 453 paintings are evidence of the lives lived by those inhabiting these caves several centuries ago. One can't help but wonder how humans actually survived the elements and wild animals living as exposed as they did.

The paintings -- scattered all over the rock formations -- are evidence of these early humans flourishing. 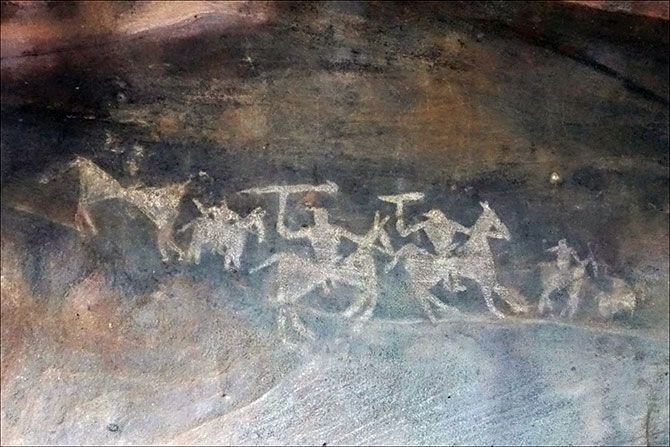 Rock paintings of Bhimbekta depict a wide range of subjects that include game and hunting scenes, besides various other aspects of their daily lives.

Groups of figures show battle scenes and cultural scenes, including dancing and music, although the only clearly visible instrument is the drum.

What is perhaps most striking is the exquisite detail with which animals have been depicted and drawn -- lion, tiger, leopard, elephant, horse, rhinoceros, gaur and blackbuck among a host of others -- testimony to how important a role animals played in the humans’ lives. Human survival depended on the existence of animals; yet it was the animals, they often had to battle to survive.

The battle scenes comprise soldiers, horsemen and elephant riders with their maces, axes and clubs. As you walk from cave to cave, you get a glimpse of their cares, concerns and their way of life.

What is also striking is that the artists of the time were committed and gifted, working as they did with minimal equipment -- no paints, brushes or easels as one would expect today.

The paintings have been etched into the rock with some sharp instruments presumably akin to brushes. There is no preparation of the base by grinding, plastering and smoothing. Local minerals have been filled in to provide colour.

The artists were also risk takers -- figures and drawings are to be found at impossible heights and you often have to strain your neck to look up and spot these.

These have probably been done by artists standing on branches of a tree or some kind of scaffolding, no mean feat given the gargantuan size of the caves. 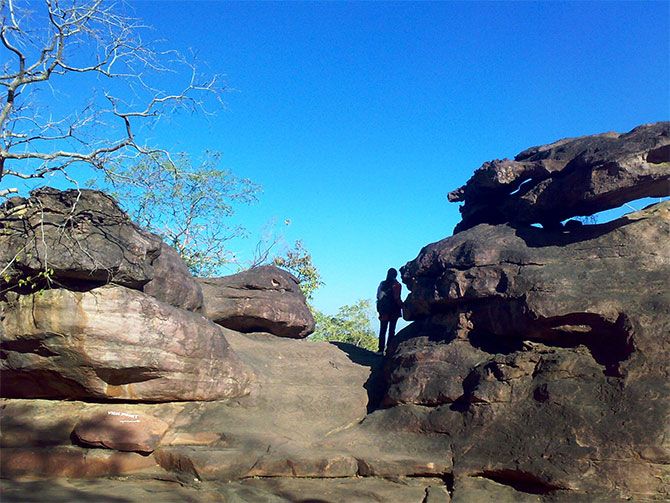 But it's not just the caves that are unique; it is the whole experience. Accustomed as an Indian to jostling and fighting one's way through any popular tourist destination, I find Bhimbetka eerily human-free.

The crowds one has grown to expect and dread at most monuments are missing. There are no long lines to negotiate.

Then, those who are there are spookily silent. I don't know if it's just an aberration, but the whole experience is quiet and calm.

Deeply silent, the caves appear to make time stand still and have their own magical effect on people.

I find a young guide, who also seems to be to be in sharp contrast to the guides one finds at the Taj Mahal or the Red Fort. He's calm, understated and doesn't haggle with me.

He states how long he will guide and what he will charge for the service.

He efficiently walks me through the caves and actually manages to add an interesting nugget here and there. But even guide-less, the caves manage to tell their own story, one that takes you back centuries.