'We all live very intense lives. S*** goes down all the time.'
'This 'eureka moment' doesn't really happen.'
'The discipline of writing and polishing a song is way harder,' Prateek Kuhad, the singing sensation, tells Veer Arjun Singh. 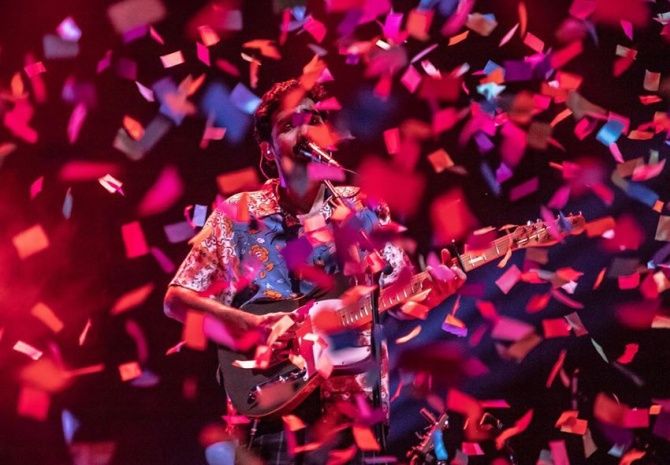 Prateek Kuhad, 29, has been in love a lot. At five, the object of his affections was a pair of blue denims that he refused to take off.

Every night, while he was asleep, his mother would quietly enter his room, remove the pants, have them washed and dried, and slide them back on.

The wilful little child would awaken to find that nothing had changed in his perfect little world.

At 14, it was a white, chunky Apple MacBook that Steve Jobs launched in 2006. A software that could stitch together the sound of virtual instruments called GarageBand was already on it. And Kuhad was beginning a flirtation with the guitar.

Kuhad grew up in Jaipur, the youngest of three siblings. He was adored by his two sisters who were adults before he stepped into his teens.

His unconventional, deeply invested but non-interfering parents -- a lawyer father and an artist mother -- would usually indulge his whims. 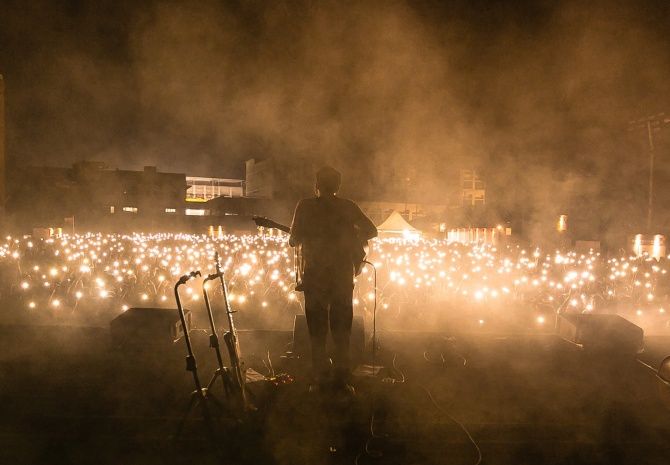 I meet Kuhad in his house in Delhi. The two-storeyed bungalow with modern interiors that he shares with his father could easily house a few more people.

Both sisters moved out after they got married and his mother chooses to live in Jaipur, where she runs an art gallery and a school for underprivileged children.

The house is frequented by Kuhad's friends and fellow musicians, who make music in his home studio, and his girlfriend, who is often his first audience.

I am browsing through the books in his living room, when he hurriedly arrives, dressed in a loose black t-shirt, green cuffed cotton track pants and white Crocs slippers.

Back from his first big India tour a few days ago, he looks keen to finish our interview and photo shoot and pack for his vacation in Vietnam.

We begin by talking about similar experiences surfing in Thailand and he tells me about a near-drowning incident in Bali. Suddenly, the mood changes and it feels like we have more time together. 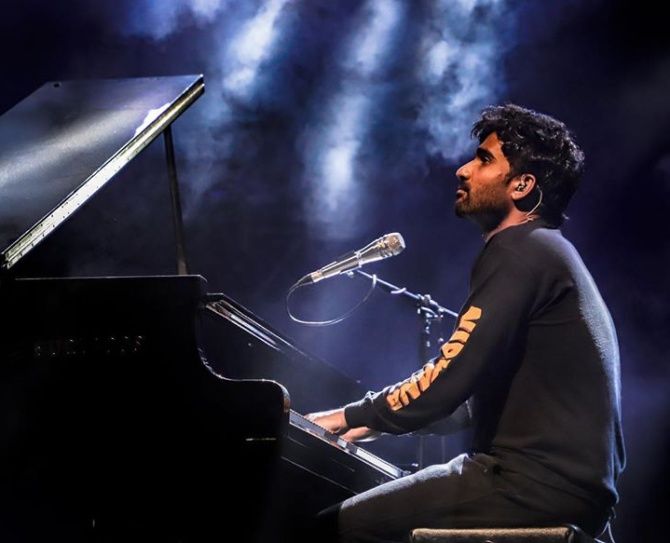 A kid of the '90s, Kuhad grew up on MTV and Channel V. His love for the guitar was amplified by his fondness for acoustic bands like Strings and Jal and the multi-instrument Silk Route.

His first exposure to British and American music came from VH1. Parents contributed by introducing him to Cliff Richard and Harry Belafonte And with the coming of the internet in the early 2000s, he discovered an affinity with singer-songwriters like Bob Dylan and John Mayer.

"There is not a single musical bone in my family. I would play the guitar at home and sing, but nobody was particularly impressed by it," smiles the independent singer-songwriter whose latest hit, cold/mess, featured among former US president Barack Obama's favourite songs of 2019.

But his mathematical ability did impress. "Not a 95 percenter, but I was a good kid," he says. 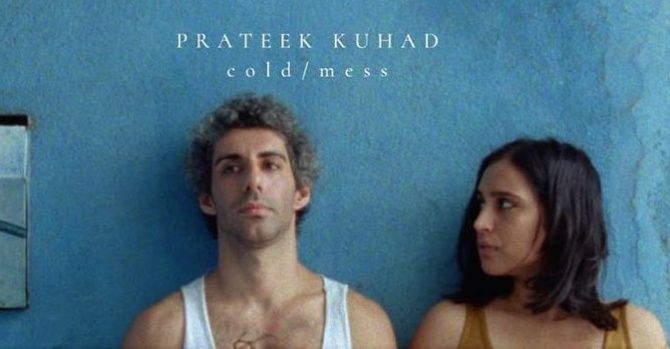 IMAGE: Barack Obama recommends Prateek Kuhad's cold/mess as one of his favourite songs of the year.

Kuhad was preparing to get into engineering school when he was accepted at New York University, where he received a double major in economics and mathematics.

New York was where he was introduced to the broody, boozy music of folk singer Elliott Smith, who proved to be a big influence later.

By the time Kuhad finished college, he had played at gigs around town, composed a couple of songs and decided on a new course of life.

After a few months of working for a corporate outfit, he chose full-time music instead.

His first EP, Raat Raazi, was released in August 2013. The five acoustic songs spoke of young love and presented the complexities of modern relationships in simple, gender-neutral verses. The EP flowed like a single 20-minute melody and people were charmed by his boy-next-door songwriting.

"I don't carry a notebook around to pen down my thoughts," says Kuhad. Still, personal experiences have had a heavy bearing on his songwriting.

His first and only full-length album to date, In Tokens & Charms, released in 2015, is inspired by his first serious relationship.

But Kuhad goes on to observe, "People make a big deal of experiences. But it's really just one per cent of the whole story behind writing a song."

People are conditioned to perceive artists as those who have profound life experiences that they are moved to express, he says.

"We all live very intense lives. S*** goes down all the time. This 'eureka moment' doesn't really happen. The discipline of writing and polishing a song is way harder." 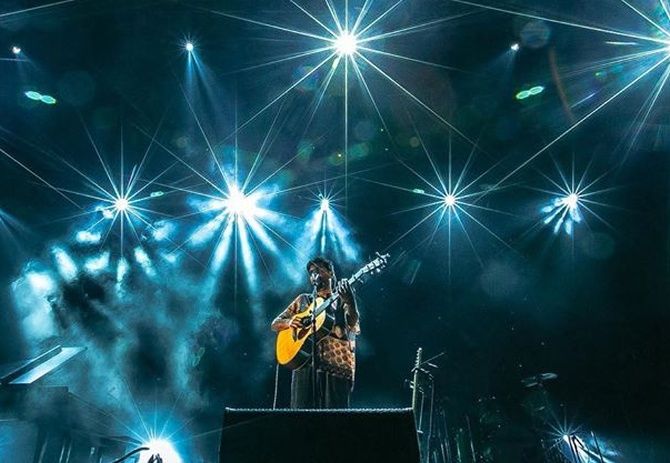 Kuhad has made countless young people cry to his music. But the balladic songs that have touched the nerve of an entire generation may have been allowed to disappear into cyberspace from his computer -- the musician is a strong critic of his own music.

Kho Gaye Hum Kahan, his duet with Jasleen Royal from the film, Baar Baar Dekho, for instance, lived in his computer for two years.

"Jasleen was pitching it, but I had almost forgotten about it," says Kuhad. "It sounds okay, though." The music video he's referring to received 11 million views on YouTube.

Kuhad has recently finished collecting all his work in one place. "Some songs were in my phone, some on different computers. I also have a lot of half-written verses and have trashed many full songs," he says.

Part autobiographical, part fictional, the self-deprecating musician says he doesn't want to get attached to his craft, but get better at it.

From his vacation itinerary to his music, Kuhad is a meticulous planner. He isn't much of a talker and is still nervous on stage.

"He likes to rehearse the set before going on stage, sing his songs one after the other and not talk to the audience between them. Basically just do his thing and get out," says Nikhil Vasudevan, a drummer who has been playing with Kuhad for the last six years. "We often hang after the shows for a bit, but then he likes to head home." 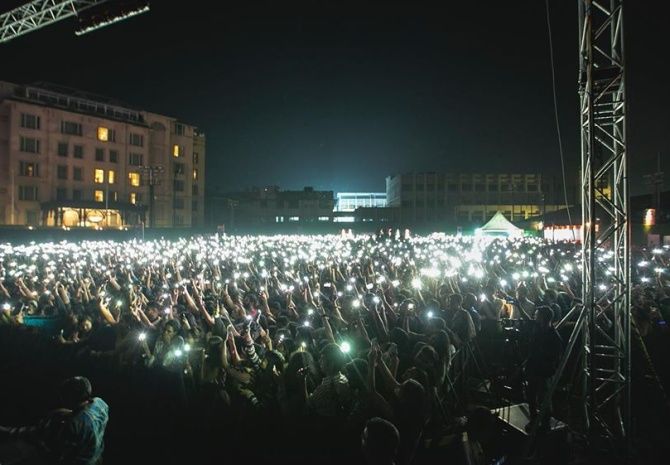 Home is where his craft is. Not on the road, not when he is moved by an experience, but in the backbreaking hours dedicated to writing songs.

"The ideas come to you when you have discipline," says Kuhad. "I have written multiple songs in one sitting."

On stage, it's important that nothing is out of place. "We take care of every little detail. We are like, let's carry even the keyboard stool that he is comfortable using to every show," says Anirudh Voleti, Kuhad's manager, who has been booking his shows since 2015.

A rare laugh let out on the mic during a performance catches his fans by surprise, and only adds to his boyish charm. But even rarer is when he directly engages with them.

In Mumbai recently, he stopped mid-song, walked closer to his audience and asked them to raise their phone screens in the darkness.

Not an original idea, not an unusual sight at a music concert. But for the math graduate turned musician, the reserved person and nervous performer, a musician who is arguably the best independent singer-songwriter in the country today, it was a transformational moment.

One in which he finally realised the extent of his popularity and the power of his music.