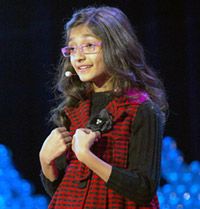 "Always ask your children what THEY want to do. Do not force them to do what YOU think is right for them."

"You can share your suggestions with them but ultimately let them do what THEY love."

"Respect their thoughts and ideas and be supportive of their dreams."

Ishita Katyal, a class 5 student from Pune, impressed the world with her ideas at the TED Youth conference held in New York, November 14. 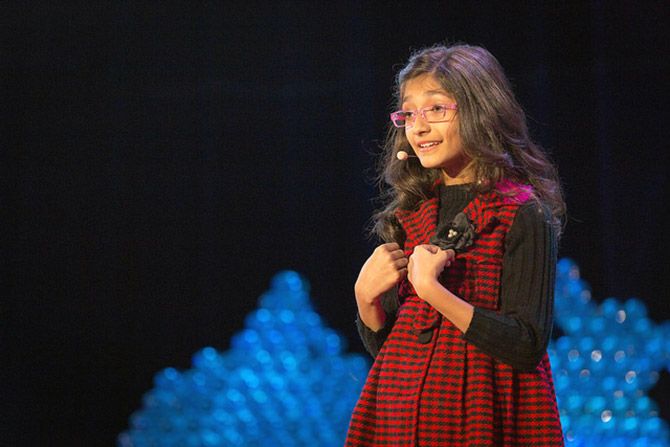 When her name was announced at the TED Youth conference a few days ago at Brooklyn Museum, New York, Ishita Katyal, a ten year old from Pune, was gripped by nervousness.

It wasn't the first time she was delivering a speech. She was nervous because this was "much bigger in terms of audience and magnitude" she says.

Four hundred teenagers from New York, 28 young speakers -- scientists, designers, technologists, explorers, artists -- from around the world, including herself, attended the day-long conference to "discuss and share (their) ideas for the future".

As she walked on the stage, Ishita reminded herself how she'd made it there in the first place.

At 8 she published her first book Simran's Diary -- Happy, sad and fun experiences of a 8-yr-old -- making her one of the youngest authors in the country.

Last year she was selected by TED, a global non-profit think tank, as the youngest TEDx licensee from the Asia Pacific region and in February 2015, she successfully organised her first TEDx event in her school.

Young Ishita Katyal was invited by the TED team on Children's Day to share her ideas on "the importance of now" and she was "nervous and thrilled".

In her four-minute-speech titled What do you want to be now, Katyal, a class 5 student of Vibgyor High in Balewadi, Pune, spoke about the challenges facing young kids and "how important it is for parents to understand what is best for their children and to support and guide them rather than force their ideas on them".

Ishita says she is grateful to her parents Nancy and Vikas Katyal for helping her "realise" (her) passion and guiding (her) to achieve what (she) truly deserves".

While Nancy is an image consultant, Vikas works for a private tech firm in Pune.

On her return to India, Ishita Katyal spoke to Divya Nair/Rediff.com about her trip to New York and how she is making a slow, but sure, contribution to her bigger dream -- "building a home for the underprivileged". Read on…

Who introduced you to TEDx?

I had seen my mother watching these videos quite often. Once she recommended that I watch a TED talk by (child prodigy, activist, writer) Adora Svitak on What adults can learn from kids. It was really inspiring.

I asked my mother if I could organise a TEDx event myself?

I must have been 7 or 8 years old then. After I published my first book, I thought it was the right time to approach TED with my idea.

You are the youngest TEDx licensee from Asia Pacific region. How did you manage to do that?

In 2014, I appeared for two rounds of interviews led by the TED team member Amanda Ellis.

In the interview they asked me to share my ideas and what I aim to achieve through TED Talk.

I told them that I wanted to inspire people to realise and follow their dreams.

At the end of it, they told me I was selected. That's how I got my license.

February 7 I organised (my first) TEDxYouth@Balewadi event in my school with the help of a few friends and faculty.

How did you prepare your first speech? Do you discuss your ideas with parents or friends?

I gave my first TEDx speech at the town hall in Bhilwara, Rajasthan on July 26.

The topic was Why you don't have to wait till you grow up.

The first few days after I got the topic, I locked myself up in a room and scribbled my ideas on a piece of paper. I wanted to tell a story that would be simple and inspiring.

I worked on it and prepared a second draft. I showed it to my parents. They shared their thoughts on how I could make it better. I took their advice and made some changes.

After I gave the speech everyone congratulated me.

Describe the experience of speaking at the TED Youth conference in New York.

One month ago, I received an invitation to speak at New York.

I had to speak without looking at a paper. I rehearsed my speech really well and kept working on my expressions, thinking how I could present it better.

Ahead of the event I was nervous thinking how I would do it. But when I reached there I felt 'Wow, I am so thrilled to be here'.

As my name was announced I feared: What if I forgot a line or two? I kept telling myself to relax.

When I reached the stage, I became confident and spoke well, just as I had rehearsed. The audience was very supportive too. I heard everyone clapping, I was happy.

Were you travelling abroad for the first time?

I have visited Dubai, Singapore and Thailand, but it was the first time I was travelling to the US and that too for work.

Did you get a chance to interact with the other speakers at the conference?

Yes, I did interact because their ideas were so innovative and interesting.

For me, it's always good to get to know other people's opinion.

During the event in New York, I made some wonderful friends who were speakers as well -- Chelsea Ha (an environmentalist); Marta Botet Borras (an 11-yr-old blogger); Anna Kaufman (a 10th grade student) and Raymond Wang (a young innovator from Canada).

You authored a book when you were just 8. What was your inspiration? What kind of challenges did you face when you approached publishers?

I must have been about 6 or 7 when I started to write about the stories from my every day life -- about school, my friends, teachers etc.

I would just pen my thoughts in a diary.

When my parents saw it, they thought it could be turned into a book.

I finished writing the book in the summer vacation of 2014.

When we approached publishers, they told us that so far they published books written FOR children and not those written BY children.

After 2 to 3 months of rejection, Partridge (Publishing) agreed to publish my book Simran's Diary (inset, left).

In your TEDYouth Photo Challenge speech you mention that your dream is to open a home for the underprivileged. What drives you to work for this particular cause? What are you currently doing about it? In her free time Ishita helps underprivileged children with reading and art activities.

Whenever I (went) out I would see these young kids my age working and deprived of simple privileges in life.

Right now I am too young to focus on this. But when I grow up and become independent I want to open a home for them and help them achieve their dreams.

How do you manage your time?

I got involved with TEDx last year and since then I found myself to be a little busier.

If I have to prepare for an examination or write something, I wake up slightly earlier than usual so I plan my day better.

What are your favourite subjects in school?

How do you unwind? What are your hobbies?

When I was in class 1, I was a huge TV fan. But as I grew up and started reading, I realised that I should spend more time doing what I really like -- writing.

When I am not writing or studying, I like to draw and read story books.

I also like spending time with my friends or watch NatGeo.

I am a huge fan of the programme Taarak Mehta ka Ooltah Chashmah on Sab TV. It makes me laugh and be happy.

What kind of books do you read? Who is your favourite author?

I like Enid Blyton and Ruskin Bond's books. Among the Indian authors, I like Sudha Murty. My favourite author is Rachel Renee Russell (an American author of children's books, popular for her series Dork Diaries).

I like that Bill Gates is so rich yet he is so passionate and down to earth.

Michelle Obama comes across as a positive person -- the way she dances and presents herself makes me believe that she is someone who believes in being happy.

Also, I'd like to thank my parents (pictured below) for realising my passion and guiding me to achieve what I truly deserve.

They told me it was okay if I failed, but it was important that I tried. 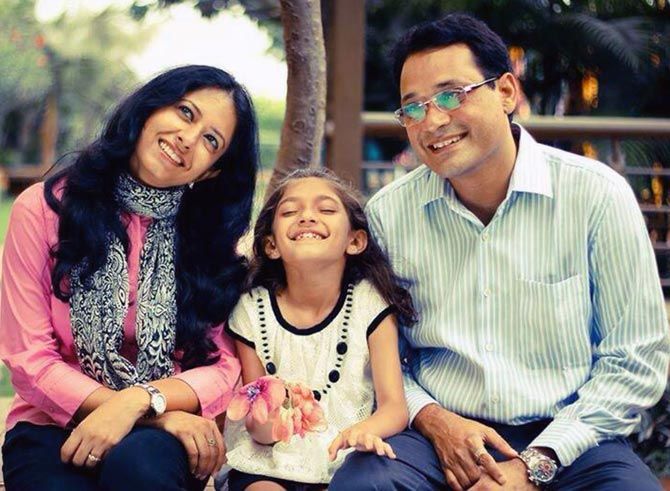 Ishita with her parents Nancy and Vikas Katyal.

What does success mean to you?

Success for me is anything that makes me happy and brings a smile on my face. At the same time, I am not greedy about it.

What do you understand about failure? How do you cope with it?

Just like success, I have also faced failures. When I started to write the book, I had to delete so many parts of it and rewrite it. I made a lot of mistakes and felt bad about it.

Whenever I felt sad, I would just step away and think what went wrong. I would write it down and tell myself not to repeat it. I would talk to myself and eventually calm down.

I think everyone makes mistakes but we should try to learn from it and not repeat it again.

Never underestimate your talent. You're never too young or too old to pursue your dreams.

Always ask your children what THEY want to do. Do not force them to do what YOU think is right for them.

You can share your suggestions with them but ultimately let them do what THEY love.

Respect their thoughts and ideas and be supportive of their dreams.

It's never too early to let them pursue what they love.