The story of how Laxmi, an acid attack survivor, rewrote her life after a cruel twist of fate is a story that's been heard of and told several times.

Yet, each time, it serves as a wake-up call to all those people who blame their adversities for their failure to do something exceptional.

Ahead of International Women's Day, we chronicle Laxmi's incredible journey and how she is setting a bright example for young girls from across the country. 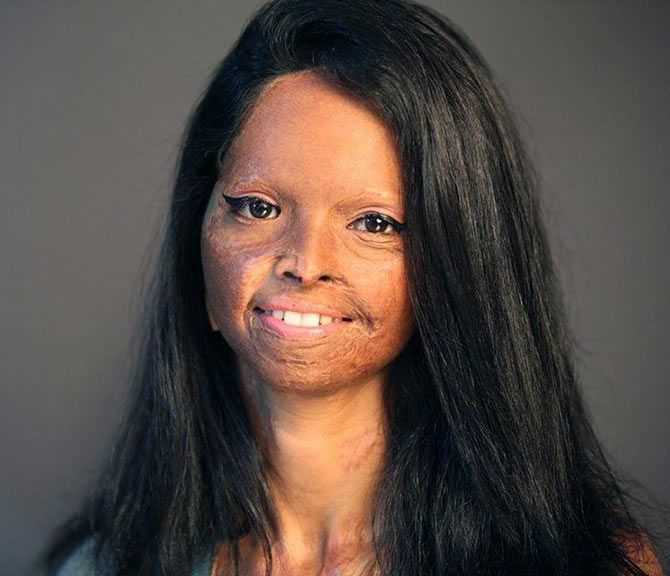 Laxmi Aggarwal was a chirpy young girl in her teens who, like most girls her age, liked to study, sing, dance and spend time with friends.

Little did she anticipate that an unfortunate, unforeseen incident would scar her and her dreams for life.

In 2005, an acquaintance, Naeem Khan, threw acid on her and "nothing else was the same again" recalls Laxmi.

She suffered 45 percent burns and, even after seven surgeries, is far from 'looking normal'.

Yet, this hasn't stopped her from doing what she wants to.

Besides starting a successful campaign called Stop Acid Attacks and helping girls like her find relevant rehabilitation and employment, she is continuously working towards setting new benchmarks.

In a heartwarming conversation, Laxmi opens up to Divya Nair/Rediff.com about how she resurrected her life and found her true calling. 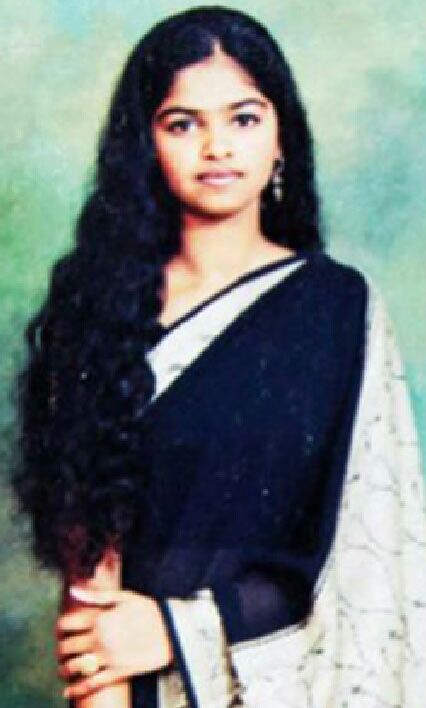 How did the attack happen?

I was 15 years old. We used to live near Khan Market (in Delhi). One of my friend's brother (Naeem Khan), whom I used to call bhaiyya (brother), proposed to me.

He was a few years older than me. I had never imagined he felt that way about me.

I told him it wasn't possible and refused his proposal. He pursued me for 10 months but I never thought he would harm me in any way.

On April 19, he sent me a text again asking me to reconsider my decision. I did not reply.

On April 22, as I was walking on the street, he threw some liquid on my face.

My skin started burning. I was crying for help.

A few people got scared and stepped away. Some people rushed me to the hospital. I had suffered 45 per cent burns.

How did you and your family cope?

Between 2005 and 2009, I underwent seven surgeries, including skin grafting and reconstruction; it cost about Rs 20 lakhs.

My father was a cook and my mother, a housewife. I had a younger brother too but, after the incident, the entire focus was on my treatment.

A few days after the incident, people started showing their true colours.

My relatives and so-called friends distanced themselves. Some blamed me for the accident; others were afraid we'd ask them to share the hospital expenses.

When we exhausted all our savings, my father's boss stepped forward and helped us financially.

What happened to the attacker?

A criminal case was registered against him and his apprentice who turned out to be a woman.

He was released within a month. In fact, he had an arranged married and has kids too.

How could that girl's parents marry off their daughter to a criminal like him?

I realised much later how our upbringing is to be blamed for all this. Society is the criminal.

When we are kids, we are taught to differentiate between girls and boys.

Boys always grow up feeling superior and having power and control over everything.

Girls are taught how to dress, act shy, cook for the family and, many times, give up their education, get married and have kids.

Like it or not, men always have the last word. The girl has no right to say no.

If you consider my case, what was my fault? I rejected a boy. And I was punished.

Before blaming the law or the girl, society needs to change the way it differentiates between the female and male child.

How did you start the Stop Acid Attacks campaign? How did it help?

After the incident, Supreme Court lawyer Aparna Bhatt came to my rescue.

With her help, we found the loopholes and realised how police officials delayed registering cases of acid attack victims.

We filed a public interest litigation against 'over the counter sale of acid' and did several campaigns online and offline to spread awareness about acid attacks. It wasn't easy but we gradually managed to bring positive attention to the cause.

Police stations are now quicker to register cases, rehabilitation and compensation for victims is comparatively faster and so is the co-operation of government and medical officers when it comes to dealing with such cases.

Did you continue your studies after the attack?

I completed my Class 10 in 2007. I appeared as a private candidate. In 2009, I took courses in tailoring, beauty and make-up. I also learnt the basics of computers. 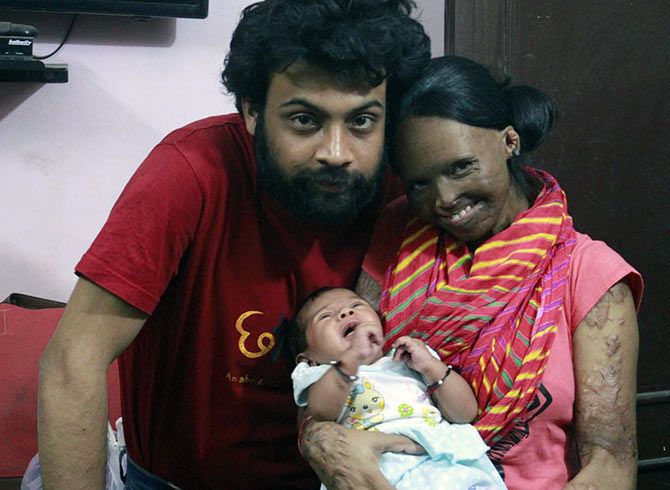 How did you meet your partner Alok Dixit?

In March 2013, I was approached by an NGO, Chhanv Foundation.

Its founder, Alok Dixit, was already working with acid attack victims. My lawyer introduced me to Alokji who had read about me and had wanted to meet me since some time.

Together, we started working towards the upliftment and rehabilitation of survivors. We would visit police stations and hospitals to collect data and arrange for accommodation and financial help wherever possible.

What I liked about him is he never looked at me with sympathy. I could see traces of my father in him.

Even after the accident, my father would encourage me and say, 'Nothing is impossible. You are destined for bigger things. You'll touch the stars one day.'

After my father passed away, Alokji helped me realise my dream. 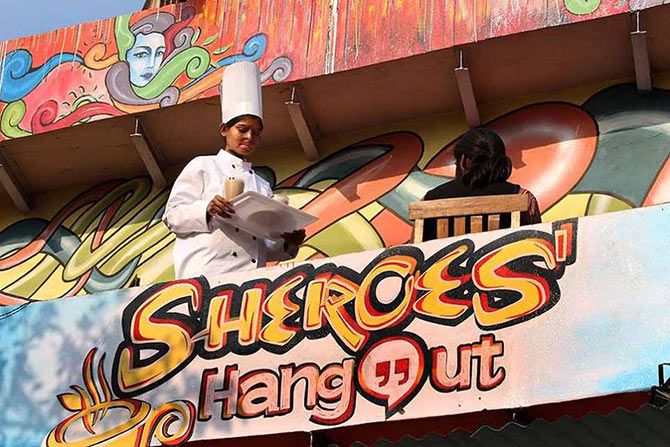 Tell us about Sheroes Hangout and how you are involved with it.

With the help of Chhanv Foundation, in 2014, we launched the Sheroes Hangout that is run by acid attack survivors Geeta Lodhi, Neetu Lodhi, Ritu Saini and Rupa Saa (Rupa does not wish to use her surname; the surname she uses now is the acronym of Stop Acid Attacks).

Sheroes began in a rented place but is now owned by these survivors.

We ran a crowdfunding campaign and raised Rs 15 lakhs (which helped them buy the place). We recently transferred the ownership to these girls.

Apart from serving tea and small bites, the cafe also has a library and a boutique that stocks clothes tailored by Rupa, who is interested in fashion designing.

We did a similar crowdfunding campaign for Rupa and managed to raise Rs 8 lakhs for the boutique.

The reading area or library runs with contributions from visitors.

Dolly, Anshu and Farah have recently joined the team and help run the cafe and boutique. They are all paid a monthly salary.

I visit or speak to the girls whenever I can and keep them motivated. The idea is to keep them positively engaged and help them find relevant employment.

We will launch a similar café in Lucknow on Women's Day (March 8, 2016) and later maybe in Udaipur and other cities.

Describe your experience of working on the Viva N Diva campaign.

When (the apparel brand) Viva N Diva approached me to become the face of their campaign, I wasn't sure what to expect.

When I shot for the campaign, it was endearing to see them style my hair, make me try on new clothes and pose for pictures.

I think it's every girl's dream to be pampered like this. I saw huge posters of my face everywhere in the city and it was overwhelming. I felt like my father's blessings were coming true.

The incident has made me realise that, no matter what the obstacles, if you are willing to fight, you will learn to challenge yourself and taste success.

Alok and you are not married. Are you sending a message?

When Alokji and I decided to start a family without getting married, some people were curious.

Our respective parents have accepted our relationship and that is all that matters to me. We have a young, adorable daughter, Pihu, who has strengthened our bond further.

According to me, problems begin when women start conforming to norms set by society without questioning them. I have nothing to prove to anyone.

As women, we need to be a little more independent about our decisions -- be it career, choosing a life partner or how to follow one's passion.

When something unfortunate happens to you, a lot of people will try to break you and make you feel low.

There are very few people who encourage you to feel positive. You must hold on to them.

If I cry for one day, someone will comfort me. If I cry everyday, people will eventually distance themselves.

But if I smile, people will come to me every day. If I am positive, everything around me will be positive too. I try to be as happy as I can.

Do you have a message for our message to readers

Women must stop feeling guilty about everything and anything wrong happening in their lives. It's okay to fail; you cannot be perfect and please everyone.

This Women's Day, I wish each woman finds the courage to challenge her boundaries and chase her true happiness.