Two young designers from Meghalaya are making a positive dent in the society they live in -- providing employment, making homemakers self sufficient -- and at the time sewing a bigger dream for themselves. This is their inspiring story. "Bum is our nickname for each other. Our friends and family started calling us The Bumbums.

"It was unique, catchy and made people smile!

"Since it is our first entrepreneurial venture as a couple we thought 'Bumbum' was befitting."

Are you scratching your head in bewilderment, wondering what 'Bumbum' actually is?

What began as friendship between two people with different professional skills and temperaments, blossomed into love, bonded by their affinity for creativity and an itch to head back home, in this case, the North East.

Their story began in New Delhi

"We were two simpletons, one natively belonging to a village in North Garo hills of Meghalaya and the other from a small town in Bongaigaon district of Assam, an hour and a half drive away from each other.

"It was uncanny to find someone in Delhi, who knew all the small villages and was fond of the life that one had grown up loving." explains Shreya.

Kharkutta is a picturesque town tucked away in Meghalaya's North Garo Hills district, bordering Assam and Meghalaya. And it is here that Bilseng and Shreya set up Bumbum in the summer of 2011. 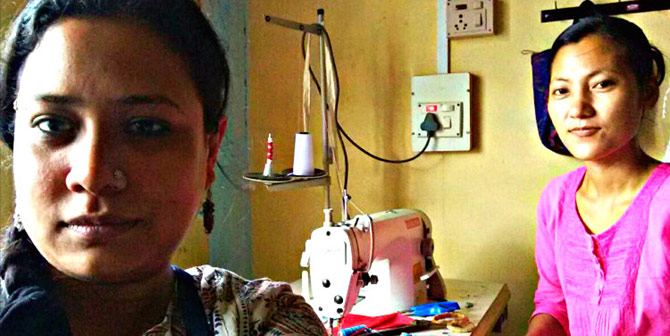 Like most design graduates, Shreya and Bil wanted to earn big bucks in a well-known company, only to realise that their batch of 2008 was graduating into a recession-ridden industry.

"Sitting at home and living off of our pocket money was not an option, so we approached the Barefoot College, a world renowned NGO in Tilonia, Rajasthan, to employ us as their design consultants for a meagre stipend of Rs 5000 each, a month.

"Mind you back then we were the highest paid individuals in the organisation! Design graduates working in a rural NGO, was unheard of among our design peers," shares Shreya.

What started off as a six-month voluntary project lasted two and a half years. And it was no cake walk either.

As Shreya elucidates, "It was an eye opening experience to work in Rajasthan with no frills, no running water only water pump, no grid electricity only solar, and with no skilled professionals for colleagues only rural illiterate and semi-literate villagers as experts in their own fields."

It was in Barefoot College that the duo honed their skills and took responsibility for themselves and those around them. Armed with this knowledge and experience the duo started thinking of their own entrepreneurial venture.

But it wasn't time yet

It was Autumn 2010 when Shreya and Bil bid a fond farewell to Barefoot College.

While Bil decided to move back to Garo hills to help out in the family business and explore the scope of setting up their future studio, Shreya decided to join mainstream design.

"In spring 2011, after a brief search I finally joined as the design head in an export house for leather furniture.

"Joining mainstream design meant a huge hike in my earnings from Rs 5 to 30,000 a month!

"As a woman, the financial independence was extremely liberating, but the demands of a corporate job and working in a male dominant industry with cut throat office politics was excruciating.

"It made me wonder whether the money was worth all the head and heart ache.

"Whether the possibility of working peacefully in a friendly environment where our creativity could flow freely, was too much to ask for," pondered Shreya.

And Bumbum was born 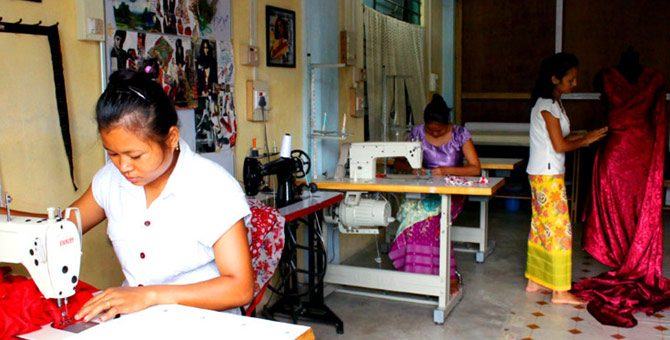 Bumbum was the answer to that craving for one's own space of creativity.

Shreya and Bil were clear in their minds about wanting to build an environment where they would like to work with others rather than for others.

As Shreya succinctly puts it, "Since neither of us had the appetite for a city life we decided that we would like to come back home to the East. With a rich inheritance of craft and handloom, it offered a plethora of possibilities for us to tap as designers with two different specialties."

By the summer of 2011, Bil had set up shop in Kharkutta, North Garo Hills of Meghalaya with three industrial stitch machines among other essentials needed for a boutique. But it wasn't all smooth sailing.

Tailoring among Garos is looked upon as a job for women only.

Finding women who were willing to try stitching on electrical sewing machines was a huge challenge as women there are primarily home makers.

Shreya points out, "After word of mouth publicity, trials and errors, Bil finally formed a team of three ladies who just about knew how to cut fabric and stitch, but they were far from the standard of designer quality.

"Our designs are cut and stitched by women born and brought up in villages.

"Bil and I try not to spoon feed them, so we guide them during cutting and stitching when required.

"We encourage them to participate in the discussions of aesthetics, construction technique and pattern making. We benefit mutually from our experiences."

In an area where job opportunities are few and far between and the rate of exploitation high, working at Bumbum provides these rural women an opportunity to hone their skills irrespective of formal training or schooling.

Besides, it also gives them that much needed financial independence.

Working amidst insurgency, among other trials 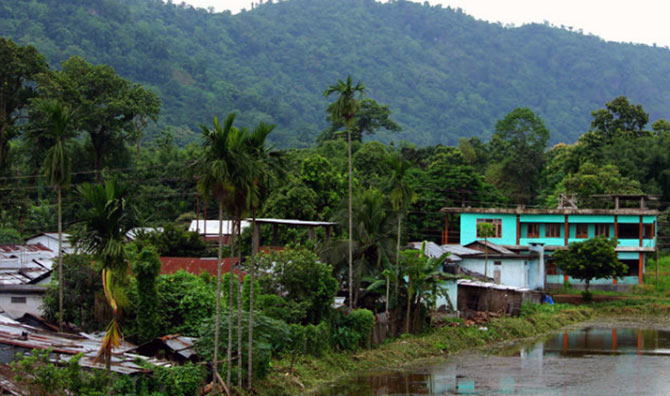 For the Bumbums, working in Garo Hills also brings with it some added challenges.

In a state that is grappling with insurgency, successful entrepreneurial ventures are often targets of extortionist groups that function under the garb of militant units.

As Shreya explains, "If you have a marginally successful business in Garo hills, it is highly likely that you will receive 'love letters' (from extortionists) very soon. A mix of poor education, lack of job opportunities and cash flow resulted in an economy that remains slow for most part of the year.

"The National Green Tribunal ban on coal against rat hole mining further decapitated the economy in Garo hills. The miscreants started focusing on extortion and kidnappings on smaller rural businesses."

"Our movements around Garo hills are restricted to day time only. Roaming around alone even in a crowded weekly bazaar is not recommended. The more you grow, the more you'll be wanted."

To make matters worse, Kharkutta is still a victim of bad network.

The photographs that Shreya shared with us were uploaded over two days, trying out different media!

As she says in frustration, "There are days when a website does not open or a file less than 1 MB cannot be downloaded because the network is too slow!

The only courier service is speed post. This will pose as a huge problem at the time of receiving orders and delivering.

However, against all these odds we are slowly gaining popularity through social networking and word of mouth."

Their mission is clear

Love letters and poor internet connectivity notwithstanding, the two entrepreneurs are ploughing ahead. Their mission is clear.

"Our label, Bumbum has reached a space where we know our strength and weaknesses.

"We can deliver quality in our designs even if we have to rip up the stitches and do it again.

"For us, each new design is a learning experience and a new skill/technique acquired.

"We want to experiment with new and challenging materials, silhouettes, details, patterns and product ranges. The only way to do it is make everything!"

And experimentation is the key to growth

"Until recently, we were only catering to women and kids from in and around Kharkutta. Kharkutta, being on the border of Garo hills and Assam, has a mixed demography of A'chik (popularly known as Garos), the Assamese, Rabhas and Bodos. This helps us receive an interesting variety of orders in traditional and western wear such as salwaar kameez, shirts, tops, pants, skirts, frocks, dresses and wedding gowns. We also do a small range of bags, wallets and potlies. Lack of florists in this area has led us into handcrafting artificial flower bouquets, veils and posies too!"

While on the one hand they are constantly experimenting with their products, Shreya and Bil also want to try their hand at marketing these differently.

"We want to introduce Bumbum into the fashion industry by participating in fashion shows but it will only be possible through external funding such as private or government sponsorship or bank loan.

"In these parts, loans and scheme are passed by corrupt means. One has to bribe, call in favours or be related to the right kind of people to qualify.

"Last year we applied for a PMEGP (Prime Minister's Employment Generation Programme) loan. Unlike most other candidates we were highly qualified but we were rejected on grounds unknown."

Bumbum is an entirely bootstrapped venture

The Bumbums admit that starting up in Garo Hills has been far from easy but they are determined to put aside these initial hiccups to take it to the next level.

"It took an initial investment of approximately 4 lakhs to set up shop.

Today, after two Christmas and wedding seasons, experimentations, trial and errors, and relentless practice by everyone, Bumbum has grown, among its loyal customers from new born babies to senior citizens, into a small brand known for its great taste and quality, comfortable fittings and the ability to take on any design," says Shreya proudly.

"In five years, we want to set up a commercially profitable craft centre with in-house facilities for weaving and stitching traditional handloom garments and fabrics.

"We want to make people work their way out of poverty.

"We want people to make the effort to turn off NH 37 to come visit us," signs off this intrepid girl.

Amen to that! The North East needs entrepreneurs with spirit and drive, now more than ever before.