"When I joined the police force I would be out there in the middle of the road whether it was a 45 degree hot summer day or pouring monsoon evening.

"It is nine years now and I am still here."

"Aapne diya toh usne liya (you gave so he took). I tell such people that you are educated gawar (illiterate)." 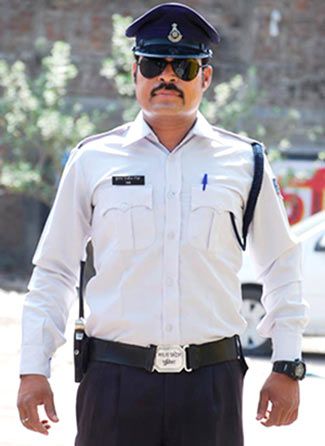 It is 7 pm. The traffic police headquarters in the old part of Indore city is uncharacteristically quiet but for the crackle of a few walkie-talkies.

The long summer day has wrung the city dry, even denying the evening its cool breeze. It is not yet ready to call it a day.

The excitement I am looking for from this unusual visit to a traffic cop station, in a city where I do not drive, walks in with the swagger of a film star.

I have never seen him but have heard tales from family members in the city who have found themselves on the wrong side of this traffic cop.

No one knows his real name. But they all know that he is not a cop to be messed with.

He is Singham, the 'dabang' cop, the moonwalker who controls the traffic with his iron will and dance moves!

They don't care about us

On any given day, if you happen to cross the High Court traffic junction in Indore city, you will find him managing the heavy traffic while doing the Michael Jackson dance moves in the midst of rush hour.

This novel approach has earned him many nicknames and a reputation that very few in his place have managed to earn anywhere in India.

Ranjeet Singh, for that is his real name, is more than the sum of the titles bestowed on him.

In a country where a traffic cop only receives grudging respect, Ranjeet Singh has shown that the stature of any work is defined by the person and not the other way round.

"I give my 100 per cent to the job. I do not care who the traffic violator is. I have even stopped the superitendant of police, and once my father too. Though, of course later I've had to listen to a word or two at home," he says, as we settle down at a desk in the room marked, 'Only for duty officers'.

There's no arguing that he has an arresting personality. But what endears him more is his sense of humour and his lively spirit.

He recalls his personal journey with practised ease -- mostly in Hindi but breaks into English to emphasise his point.

After all, he has been invited by various institutes for a talk, and has received numerous awards both by the Madhya Pradesh police department as well as private organisations in the city.

"When I joined the police force I would be out there in the middle of the road whether it was a 45 degree hot summer day or pouring monsoon evening."

"It is nine years now and I am still here," he says.

Initially, when he started dancing people thought he was crazy. But they soon learnt, often the hard way, that he was a strict disciplinarian.

"Today, a person will think twice before jumping the signal when he is on duty," says an acquaintance.

In these years, Ranjeet's fame has travelled far and wide.

He has an enviable following on social media and young people seek his opinion in matters of career and love.

"Aapne diya toh usne liya (you gave so he took). I tell such people that you are educated gawar (illiterate).

"You have earned so many degrees and this is how you behave," he says.

"I make sure to deal with the person the way s/he deals with me. If they call me names and insult me, I do the same," he adds, pointing out that this approach of dealing with traffic violators has earned him respect.

The way you make me feel

But all this would not have been possible had Ranjeet not tricked fate.

"It was raining and the car driver did not see me," says Ranjeet, absolving the driver of any fault.

He was laid on the bed for three months and subsequently transferred to a desk job, pushing files and filing memos.

"It was the worst time of my life. I was very unhappy. The traffic junction is where my heart is. Woh mere liye bana hai. Jo cheez mujhe zindagi se chahiye thi, mujhe road par mil gayi thi (traffic junction has been made for me, whatever I wanted from life I got it on the road)," he says, referring to the traffic junction as his karmabhoomi (place of work) where he could dance in front of a captive audience and live his dream of being an actor.

In life, very few people get to do what they love, but after the accident, I too lost my chance of happiness at my job.

Around 2010, when the police department was reviewing the worsening traffic condition in the city, a senior officer recalled Ranjeet's past success with managing traffic and approached him to take up field work again.

"I was ecstatic. And though my toes still hurt, I have not regretted my decision to come back on the road."

Man in the mirror

Incidentally, it is the road that was his saviour when as an 18-year-old he ran away from an abusive home.

"My father would often hit me. He was a police constable, and after a hard day at work when he returned home (sometimes drunk), he could not deal with the fact that I had failed in my exam or been up to mischief.

"I was the black sheep. I could never make him happy, even though I always wanted to become like him and make him proud," says Ranjeet.

The oldest among three brothers, it was up to Ranjeet to lead his brothers and show them the path to success.

"But I failed miserably. And when I could not clear my class 12 board exams, I knew it was time to leave."

He came to Indore to his aunt's house from Jhabua, where the family was posted.

With the determination to make his father proud of him someday, Ranjeet joined the traffic police department.

"I was a good athlete and subsequently became the best cadet. Today, when I see the pride in my father's eyes it gives me a lot of satisfaction."

Perhaps, it is this drive and self-motivation that keeps Ranjeet's spirits up.

Otherwise, standing and blowing the whistle for eight to 10 hours under harsh climatic conditions, that too with the stress of maintaining unruly traffic can kill anyone's spirit.

The paltry paycheck at the end of the month probably is akin to the last blow.

A traffic cop receives anywhere between Rs 16,000 and Rs 20,000 with at least five years of service behind him. 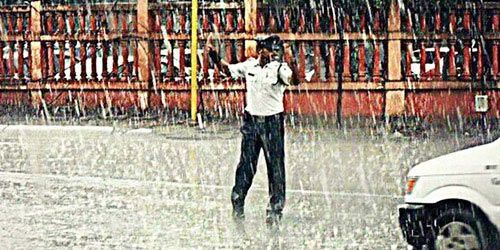 "When I come back home, believe me, I do not talk to anyone for a few hours. I can only see my bed."

Ranjeet is very careful about maintaining his physique and stamina.

"The work that I do is purely physical. And with age, my stamina is also decreasing.

"I am 37 now, and when the new recruits ask me how and what to do, I tell them it is all about energy and stamina.

In fact, Ranjeet has been approached by some production houses to advertise energy drink brands!

"Marvaoge kya (do you plan to kill me), I ask them. I will be sacked."

He starts his day at 5.30 am with yoga and a session at the gym followed by breakfast which is primarily two bananas or an apple.

Though he is married and has two children, Ranjeet does not wish to talk about his personal life.

"I have been hurt in life and in love. I have dedicated myself to serving my country now," is all he says about how he lost love.

Despite jealous colleagues, it is incredible that Ranjeet has been able to inspire young recruits in his department, four of whom now mimic his style while controlling traffic.

"The turning point in my life at the crossing came when an old, poor thelawala (person with a push cart), who I would notice every day and help him with his load, came up to me one day and gave me a 10 rupee note saying he wanted to donate it in a temple, instead he found his God here. I still carry that soiled note as a reminder," Ranjeet says.

There's another old, blind woman who comes at the crossing at 4.30 every evening and calls out his name, knowing he will help her cross the road.

"If I am not on duty I tell the guy stationed there to help the woman."

He has taken about 50 odd people to the hospital following road accidents.

The incessant ringing of his mobile phone interrupts our conversation.

"It is my coach. I am preparing for the PSC (public service commission) exams," Ranjeet tells me, removing the black band that he wears on his arms.

"See, this is my original colour. Jab mein nahata hun toh pura kaala pani behta hai (when I take a bath, the dirt and grime make the water black). It is scary because, at the end of the day, I am also human like you," he says.

The next minute he recalls how he got to keep the armband.

"This belongs to my cousin who died during the Kargil war. He took four bullets, which shows he died fighting. I asked my bhabi if I could have his band. Whenever I am down, this reminds me of my purpose in life. To serve."

Is itra se kapdo ko mahakana badi baat nahi, maza toh tab hai jab mere kirdar se khusboo aaye. (It is no big deal to smell good because of the perfume. The fun is when there's fragrance from my character.)

Not surprisingly, Ranjeet is a poet at heart and has couplets like the above ready for occasions like this.

In all probability he will not be able to attend his classes after our prolonged talk, and will head straight home tired after a gruelling 12-hour day.

He will be back tomorrow with new energy and a few new dance moves to beat the traffic and cool some road rage.