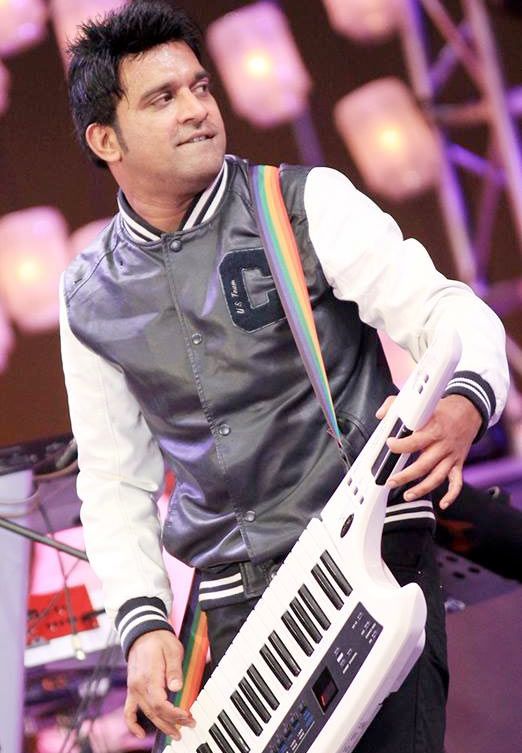 "What matters is that you live the moment and remain strong. It doesn't matter which form of music you love. Irrespective, one must spread music because music has the power to spread love and peace," says sensational pianist Stephen Devassy

I would just use any instrument known to man in any combination as long as it describes an emotion: Renowned pianist Yanni

A sensational pianist, Stephen has scaled brilliant heights in the world of music. Today, he is recognised as an ace musician, arranger and performer with an ability to mesmerise a large audience by setting the stage on fire with his electrifying performances.

Despite sharing stage with legends of Indian music like A R Rahman, Zakir Hussain and Sivamani, Stephen doesn't allow his achievements to get in the way of his humility.

Stephen, who remains Asia's highest scorer in solo piano exams from London's Trinity College of Music, strongly believes that music has the power to spread love and peace. For him, it was never about the money or fame, but more about the love for all forms of music.

On World Music Day (June 21), he spoke about his love for music, his latest album Project 70 and more.

What is your concept of music?

Music should be enjoyable. Listeners should be able to satisfy their tastes. Music relaxes us, rejuvenates our mind and helps us escape from the stress of daily life. I try to make waves among youth with my music, because I represent them.

Where did it all start for you?

When I was small, my brother Sam was learning to play the violin at a church near our school. Inspired by him, I started practicing the keyboard from the violinist Leslie Peter in 6th grade. Soon, I become a regular performer at the church. After my 10th grade, I joined Chetana Academy of Music in Thrissur, which is affiliated with Trinity College of Music, London. Fr. Thomas taught me how to become a better pianist and this is where my real journey as a keyboard player began.

At what point in life did you know that things were going to change from here on?

My big break came at the age of 18. I was doing orchestration for two songs of an album by Johnny Sagarika. After that I was invited to play for versatile singer Hariharan on his Europe tour. We performed in US, Canada, Germany, Rome, Belgium, South Africa and Middle East. It remains one of my most cherished tours because I got to learn a lot about Western classical music.

Which has been your most memorable performance so far?

I've a host of favourite performances that include the Shakti Foundation show along with the likes of Zakir Hussain and Sivamani, the Sydney Festival along with A R Rahman and of course playing at the Copa Cabana beach, Brazil in front of over 20 lakh people was a dream come true.

However, for me personally the most memorable moment I've had with my music was when I played for 80-100 leprosy patients at a hospital in Angamaly. It was a touching experience because for those patients entertainment was restricted to one TV for three wards. I just wanted to spread some joy in their life with my music and that remains one of the best moments of my life.

Tell us a little about your recent album -- Project 70

Project 70 is an experimental album. As the title implies, I finished a 20-minute piece in 70 days and that includes the composition, the arrangement, the mixing, the editing and the filming. The first video named 'Aliens in the City' was released on YouTube recently in which I play the grand piano. The album brings over 250 artists from different parts of the world together to celebrate the colour of Indian music.

How has technology impacted music?

Technology has changed my life drastically. In case of the keyboard, with the help of technology it can produce different kinds of sound. And for me this is an inevitable thing. I have my conservative musician inside me, but one part of me goes with today's trend because I truly believe that change is the only constant in life.

What's your take on the current breed of pianists?

I am really happy to see the next generation taking up music as a career. It is really the support of people, fans and the media that encourages people to learn an instrument. It is encouraging to see children enthusiastic about playing the piano. If they remain committed, if they have the right kind of guidance and of course a touch of luck from the almighty above, they will do well in their music.

On World Music Day, what's your message to all your fans...

Firstly, I would like to thank my fans for supporting me. It's really because of them I am here. I didn't run after money or fame because no one really knows what life has to offer. Everything has a phase of its own. If there is a bad phase, a good phase will follow soon. What matters is that you live the moment and remain strong. It doesn't matter which form of music you love. Irrespective, one must spread music because music has the power to spread love and peace.

Band Baaja Bangalore! Five bands that are rocking the city