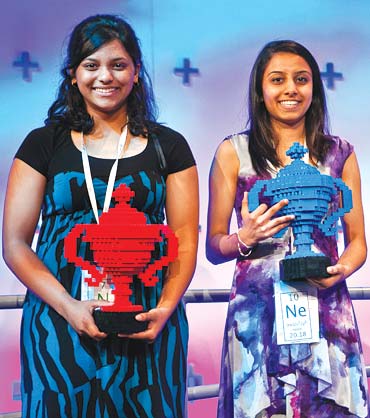 Shree Bose and Naomi Shah emerged winners at the Google Science Fair held last month for their projects on ovarian cancer and treatment of asthma respectively. Read on to know more about their interesting projects.

Shree Bose and Naomi Shah were among the winners at the Google Science Fair, July 12.

Shree won in the 17-18 age group for her project that aims to improve ovarian cancer treatment in patients who become resistant to certain chemotherapy drugs. Naomi, who proved that making changes to indoor environments can reduce people's reliance on asthma medications, won in the 15-16 age group.

The judges said the unifying elements of the winners were their intellectual curiosity, their tenaciousness and their ambition to use science to find solutions to big problems.

Shree, 17, from Texas, who won the Grand Prize, said it was her dream award.

"I'm so happy I was given an opportunity to fulfill that dream. It already has and will open up so many more doors for my future in research and science," she told India Abroad.

Shree said, "To have the opportunity to compete against some of the most incredible minds and to actually be chosen as the winner was just unbelievable."

At the same time she was chosen as one of the 30 finalists in the Society for Science and the Public's school program. "Meeting so many other finalists who had already started doing college-level research from such a young age inspired me to get involved in research," she said. Shree started e-mailing professors in her area and was lucky to find Dr Alakananda Basu at the University of North Texas Health Science Center, who allowed her to work in her lab all summer. "It was there that I started doing background research for this project," said Shree.

Portland, Ohio, resident Naomi, who has been interested in science since she was 5, said, "It was such an amazing experience! Still haven't gotten off the adrenaline rush yet."

She was studying about lung cancer at a research lab affiliated with Oregon Health and Science University, when she decided to participate in the fair. She spent the whole summer researching and gathering data for her project.

She said her study was not a part of her school project, "I developed, executed, and analysed all the methods and results independently. I learned a lot through experimentation and modeling about the impact of air pollutants on the lung health of asthmatic patients."

She added, "My parents are both business people. Although they are not scientists, they noticed my passion for science at a young age and have always encouraged me to follow my dreams and do what I love."

Hyderabad's Harine Ravichandran was the only Indian student to make it to the finals for her project on power line conditioning using series voltage regulator.