What happens to the mother after the baby is born?

Sangopan, founded by Tejashsree Joshi is one of the few healthcare organisations that focuses on post natal care. This is their journey 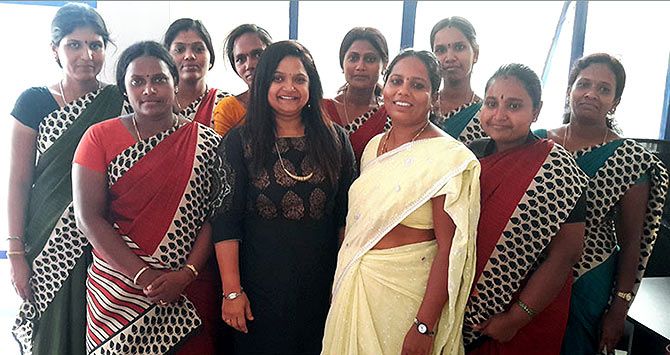 The other day I got a call from Richa.

"Into the eighth month of her second pregnancy, Richa wanted to avail Sangopan's post-natal massage services once again.

"Richa was the first mother to have benefitted from Sangopan's services four years ago, so it was great to hear from her," says Tejashree Joshi, the managing director of Sangopan, a healthcare start-up in a niche segment -- mother and child well-being.

Interestingly, the word Sangopan is rooted in Sanskrit and it means 'to nurture and care for the newborn'.

"Motherhood, as we all know, is an important aspect of a woman's life.

"She faces several emotional and physical changes during the journey.

"We at Sangopan combine the traditional sources of support with modern healthcare systems to give mothers and their new-borns the best post-natal massage," Tejashree says.

It has been an exciting four years for Sangopan.

It started with a single maid and one nursemaid in 2011 and has now grown to a 12-member team.

As on date, they have served over 1,000 mother-new born duos.

Armed with an educational background in Commerce and Accounting, Tejashree was always passionate about healthcare and medicine.

She did postal courses in homeopathy and then took up a job with a Medical Transcription company in Hyderabad.

It was the four years spent in the medical transcription industry, working as a home-based editor for different companies that she really enjoyed the work.

She also got insights into the world of healthcare.

Tejashree was born and brought up in Kanpur where her father worked as a technologist in a leather factory.

"He was the only breadwinner of the family. When he passed away suddenly in 1998, my mother turned to entrepreneurship to keep the show running.

"She started running her printing business which became our source of income. The seeds of entrepreneurship too were unknowingly sown inside me around that time," Tejashree recalls.

When Tejashree was expecting her second child in 2010, she started looking for a trained person for post-natal massage.

As she struggled to find the right person, she realised the gap in demand-supply in this niche sector.

"While it was clear that every expectant mother needed and deserved this care, this was also a great opportunity to empower women from the lower strata of society in a dignified manner," she says.

"I was always clear that I wanted to balance my responsibilities towards my family alongside my career. Medical transcription was a preferred option precisely because it allowed me to work from home.

"The more I thought about this opportunity I realised this as an area where I and the other people who work in this can balance work and commitment towards family," says Tejashree.

After a lot of thought, she decided to take the plunge and sent out a mail on a parenting forum asking interested mothers about the same.

The joy of this work makes them seem less important now to Tejashree but looking back she feels every challenge and hurdle was a great source of learning and a stepping stone for progress.

"I used to get frustrated with managing schedules and irregularities of my daily maids and here I was running a business where health and lives of infants depended on the way my nursemaids performed every day.

"It was a big learning curve to navigate, where I needed to interact with them daily, understand their issues and concerns, and communicate with them in a way that they feel and understand the urgency and respond appropriately to me and my customers.

"The other big challenge was learning the basics of business and selling.

"I am still the lone salesperson for all the enquiries, though we are in the process of scaling up now.

"Over the last four years, I have spoken to over 3,000 mothers and explained to them about our services and benefits of post-natal massage," admits Tejashree, herself a mother of a teenager and a toddler.

Sangopan started when Tejashree's second daughter was merely four months old where she had to manage both her family and the company.

"It was and is tough. There were many occasions when I felt like giving up, in moments of stress when managing anxious customers and tough workers.

"However, I had strong support and encouragement from my husband, and the fact that we had a unique business model kept me going," says Tejashree.

"I remember this example of a father who got tears in his eyes when we trained his daughter to give massage to her infant, the young mother whose infant had developed fungal infection on the scalp since they had hired an untrained housemaid for this.

The mother of twins who engaged us for more than a year, the couple from US who flew down and stayed in Bangalore for three months post the delivery in a service apartment, only to benefit from our service -- these have been our confidence-boosters along the way," smiles Tejashree.

The road ahead is exciting and interesting, she says.

Some more players have entered in the market now but the market is big enough for all.

"We are proud that we are the first ones, the pioneers in this and we are the largest," adds Tejashree.

Very soon, they are expanding to other cities and incorporating Nanny Services, Consultation Workshops and Yoga/Lamaze Services into their ambit.