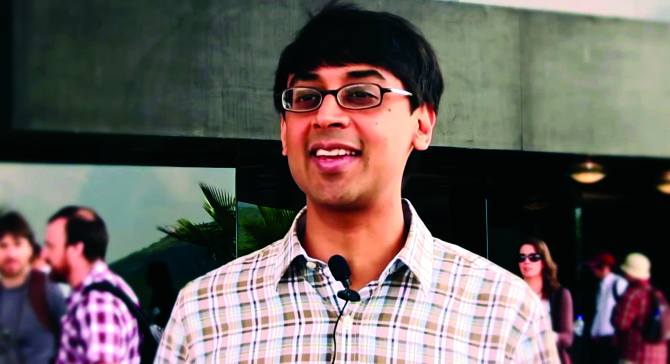 Dr Manjul Bhargava is back after what he describes as "an overwhelming couple of weeks" in Seoul, where he was feted, feasted and finally mobbed into unruly retreat by hundreds of fans -- in numbers enough to disconcert even a mathematician. Well, that's what comes of winning a Fields Medal, as Bhargava managed to do August 12 at the International Congress of Mathematicians, held this year in South Korea.

Now back in the United States, the R Brandon Fradd Professor of Mathematics at Princeton University is spending much of his time replying to 2,000-plus emails and hundreds of invitations to talk at different functions, and attending the US Open, cheering on his friend Vania King.

In South Korea, Bhargava said, mathematics is very big -- both among students and those who decide what policy actually makes a country go forward. To stress the point, the government declared 2014 the Korean year of mathematics. According to the ICM, it drew nearly 20,000 people, of which official participants numbered only 5,217 (yes, the organisers had to have that number down pat at least; this was a math congress). Those who attended included thousands of high school and college students.

The Fields Medals, possibly the highest honour in mathematics, was handed out by Park Guen-hye, the president of South Korea.

Bhargava said the Korean president was extremely excited to be there and was there the whole of the first day. He said veterans compared that response with the time the Congress was held in the US in 1986. Then the organisers could get neither the US President (Ronald Reagan) nor the California governor (George Deukmejian) at the time to attend.

In countries like South Korea the pure sciences and scholarship for its own sake are more respected, he said, adding, "That you don't see as much in the United States -- or India, for that matter. Those (interested) in pure sciences in India are the ones who tend to come to the United States, to get the opportunities and respect they might not get in India."

Besides the South Korean media, there were journalists from many countries present, though not from India. Al Jazeera represented the Middle East, at least partly because one of the likely contenders for -- and an eventual winner of -- the Fields Medal was Maryam Mirzakhani, an Iranian who works at Stanford University.

"You could see which country was interested (in mathematics) by which media was there," he said.

Korea's Educational Broadcasting System was covering all the ceremonies with live commentary.

"The Indian media didn't show up at all," he said.

He added, "It was like a big sporting event -- the opening ceremony, commentators making remarks about each little thing that happens... It was (like) a really spectacular sporting event."

One of the most interesting people Bhargava met at the Congress was Ingrid Daubechies, president of the International Math Union, and a professor at Duke University.

There were a few former Fields Medallists who came to various discussions and weighed in at times -- such as Vaughan Jones, a distinguished professor at Vanderbilt University, and a professor at Cambridge University.

Bhargava himself had wanted to attend various lectures that were relevant to his work. "I had the schedule in front of me. I had marked up all the lectures I was excited about. I ended up going to about two of them in the whole Congress," he laughed ruefully. "The rest of the time was taken up by meetings and press conferences and interviews... I ended that up doing only a fraction of what I'd planned to do. I feel a little sad that all these lectures I wanted to attend I could not attend."

Bhargava plans to make amends, though, since a lot of the lectures were videotaped and put online. He said he had made a list of those he wanted to watch when he got a chance.

Most of the lectures were hard for students, however interested they were, to understand, since the language was abstruse and laden with mathematical jargon.

"In my case I made a concerted effort to make it accessible not only to mathematicians but also to the students. I promised the students on the opening ceremony day that you can come to my lecture and you'll understand everything. I worked hard to make sure that that would be true," he laughs. "(So) anytime I brought in a new piece of jargon I would explain it in some detail. The students claimed afterward that they did understand everything, although maybe they were just being nice to me."

Every evening there were gatherings organised by embassies of various countries -- US, French, Canadians. The envoys of these countries hosted the event.

He had about 10 family members, including his mother Mira, a mathematician at Hoftstra University. Among the others were his cousins' children, Brij, not yet 1; Kalyan, 6; and Arya, 9, who, despite their age, kept their peace during the ceremonies. The family is planning another small celebration, but, given his hectic schedule, that will have to wait a few months.

Going on to speak about the mails he received, Bhargava said about a quarter came from mathematicians saying congratulations, that they were rooting for him, or that they were expecting it.

"I also heard from basically everyone I've ever known" -- he laughs self-deprecatingly here -- "who happened to hear the news. Lots of people from elementary school and junior high and high school, who I hadn't spoken to in so long, it was clearly wonderful to hear from them... There were hundreds of those."

Asked if he is still getting mail, he says they number about 3,000 now. The recent crop came from people who saw the media interviews after he won the medal.

How does he feel now? Are there no more peaks to achieve? Or does he find conventional fame a little puerile?

"No. Not really. Mathematicians don't really work on what they do for awards. For example, for this award, the mathematics that this award was given for was, for me, far more exciting than the actual award. Of course, this award has other consequences. It provides more public exposure for the mathematics set... I view this award as an opportunity, first of all as an encouragement and inspiration to keep going on, to know that what I was doing is appreciated. That excites me to continue. And it inspires not just me but my students and everyone who works with me. The other aspect of the award is that it is an opportunity for the public to learn about mathematics and what mathematicians do, about mathematics education. That's the thing the award gives, and that's something nicer if it happens earlier rather than later."

Have expectations been raised too high, enough to intimidate him?

"I don't know. It can happen in the long term but so far it hasn't changed… what I plan to do next," Bhargava said, adding that it may give him a little confidence to continue doing what he has.

He cited a study that concluded that the Fields Medal actually reduced the winners' productivity.

When it was pointed out that Peter Sarnak, his friend and his mentor had said that the award would do no such thing to him, Bhargava laughed.