"The mountains I climbed, the butterflies I counted, the streams I swam, the jungles I walked along, all called me back. The urge to go back to nature was very strong," says Tibin Parakal from Trissur who quit a lucrative engineering job in Delhi to start a restaurant but then ultimately became a farmer. 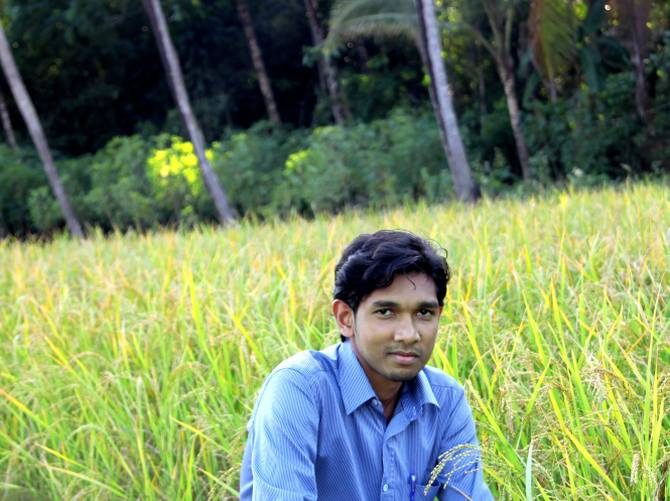 Educated youngsters show no interest in carrying on the farming tradition of their forefathers. But one 26-year-old chucked his job as a networking professional in Delhi to be a farmer in Kerala.

Moreover, he has chosen to farm without the use of pesticides.

Tibin Parakal's father was a farmer, but he discouraged his son from being one. So, Tibin studied Information Technology and networking, and worked as a networking professional in Delhi.

"From the cradle of nature, I was thrown into the concrete jungle that is Delhi. I felt suffocated. I didn't see human beings around me; only machines that worked to earn lots of money.

"The mountains I climbed, the butterflies I counted, the streams I swam, the jungles I walked along, all called me back. The urge to go back to nature was very strong," Tibin explained.

Still in Delhi, he began planning an organic restaurant he would start in Trissur on the lines of what his friend was doing in Trivandrum.

He hid his plans from his parents; he knew they would be horrified if their son quit a well paying job in Delhi to start a 'hotel' in Trissur.

He only discussed the viability of the idea with some of his friends. One of them, George K Jose, had just joined Infosys in Bangalore.

Tibin and two friends from Trissur, George and Aneesh, pooled in one lakh rupees to start an organic restaurant called Pathayam, in Trissur. 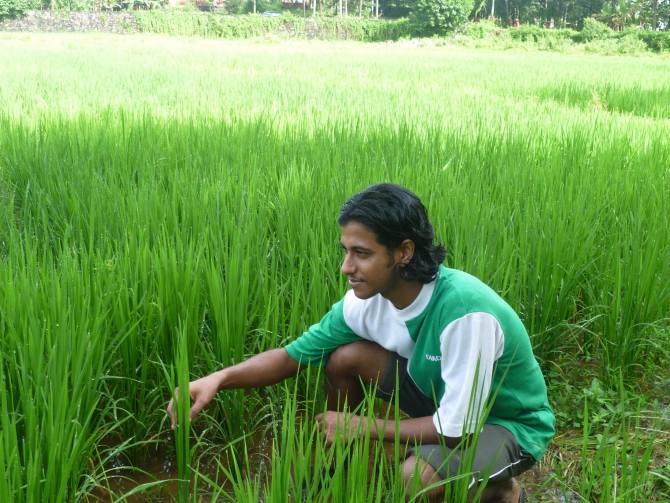 George K Jose at their farm in Trissur

The restaurant opened during Onam in 2010.

Recalls Tibin, "We employed only the cooks; serving and the rest of the work was done by the three of us and some of our friends."

They attracted excellent publicity in the media. At the evening opening they served five types of puttu like ragi, wheat, vegetable, corn etc, which went down well.

"Hundreds of people came and had to wait outside. It was unprecedented. Everybody appreciated our efforts. We were soon making Rs 10,000 every day with a profit of around Rs 5000-6000," Tibin said.

As expected, Tibin's parents were horrified at their son's decision.

Tibin tried to scare them by saying, 'If you want to see me alive till I am 60, let me do what I want to. But if I continue to work in Delhi, you will see me only till I am 35!'

The restaurant had to close because of construction work in the vicinity. Not able to find another place to suit their budget, the three entrepreneurs abandoned the project.

"I was not dejected. I had always wanted to be a farmer, and I thought it was a good opportunity to do it. We had started with organic food made without any chemicals but the first step should have been natural farming," Tibin said.

"We were bowled over by Palekar's ideas. He understood the real vibrations of nature. In those five days, it was not farming that he taught us; he made us understand and feel the pulse of nature. He introduced us to the most minute living beings in nature. It was an eye opener for us," Tibin recalls.

Tibin's parents agreed to part with 10 cents of land (10 cents = 0.1 acre = 4356 square feet) to their 'crazy' son and his friend so that they could experiment with natural farming.

"My father was not in favour of our experiment. He asked me, 'Do you think we are fools? I have been cultivating paddy for the last several years and you say we don't know anything? Even with pesticides, our yield is only this much, and you want to show us that without pesticides, you can have more yield?'

"He literally laughed at us. I begged him for a small piece of land to do our experiment just once. Reluctantly, he agreed.

They planted paddy using the seed of an ancient variety of rice called kuruvai, cultivated by adivasis. They tilled the land and did the planting themselves.

They used no pesticides, only the Jeevamrutha solution made of cow dung, cow's urine, jaggery, flour, soil and water, as created by Palekar.

The resultant paddy was much healthier, greener and bigger than the one cultivated by his father using chemical pesticides.

"Our paddy looked so healthy, and when the paddy of the nearby areas got infected, ours remained unaffected. That was when everybody realised there was something right in what we did. My father was shocked when we got more yield than he had ever got in his life!"

Most of the first yield was kept as seeds for the next season. "That was in 2011. We even distributed the seeds. You won't believe this, but today many people cultivate kuruvai in Kerala from the seeds we distributed.

Fans of this type of rice are former Chief Minister of Kerala, V S Achuthanandan and actors Mammootty and Srinivasan.

Tibin and George have inspired the film actors to start farming and helped them out.

The paddy cultivation expanded to embrace two acres of land taken on lease and made a profit of Rs 50,000 the second year.

The success of the first two yields prompted them to expand their holding to 25 acres of land. The yield was worth more than Rs 15 lakh but faulty marketing resulted in a loss of Rs 7 lakh. That did not dampen their spirits because it was a marketing failure and not a farming one.

Since then, they have been making a profit of Rs 2 lakh every season.

Other than farming, they undertake projects for the Agriculture department, helping families develop a kitchen garden.

Tibin has decided to concentrate on cultivating organic vegetables on 15 acres of land at Kattappana in Idukki district. Some 100 kilos of vegetables are sold every day.

In due course, Tibin wants to develop a model farming institute to train youngsters in natural farming. 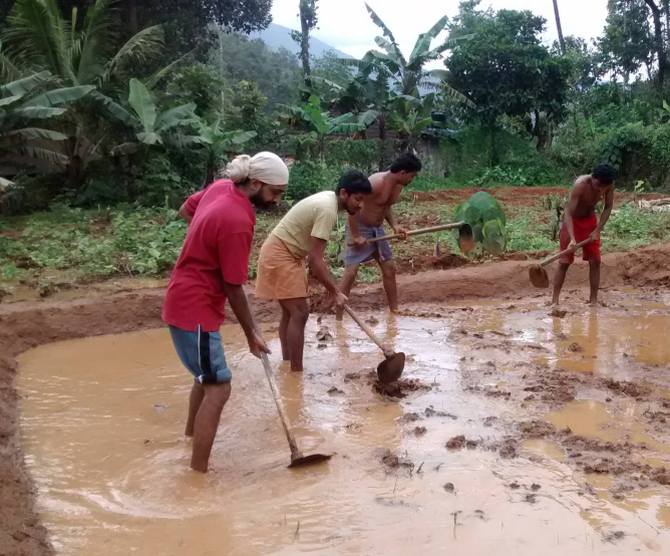 Tibin and George are indirectly involved in farming 400 acres of land, as advisers.

They continue to farm their 25 acres of land taken on lease. "Our life is dedicated to farming. We want others to do zero budget natural farming too. That is why we work as advisers.

"When actors like Mammootty start farming, we hope that it will inspire more people to engage in natural farming.

"We know we will survive as farmers. Our dream is to popularise Palekarji's natural farming for the betterment of nature, people and society as a whole," Tibin Parakal concludes.