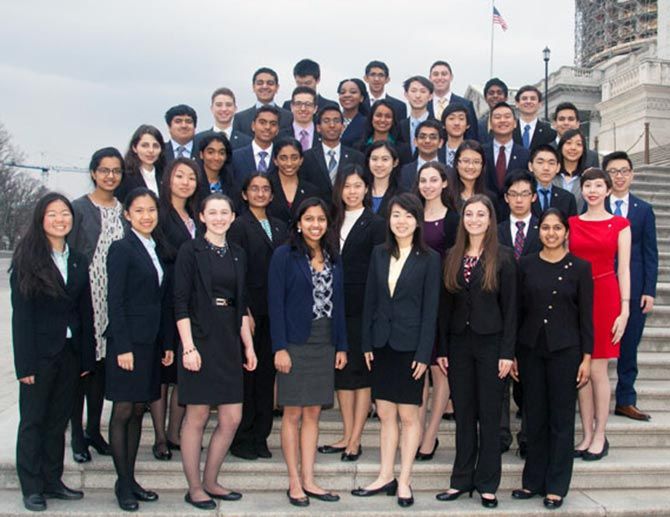 Same was the case with the second and third spots in all the three categories, as per the list of winners released by Intel Science last night.

"They, and the rest of the top winners of Intel STS 2016 are using science and technology to help address the problems they see in the world and will be at the forefront of creating the solutions we need for the future," said Maya Ajmera, president and CEO of Society for Science & the Public and alumna of the Science Talent Search.

Jagadeesan won the Second Place Medal of Distinction for Basic Research for investigating an object in algebraic combinatorics to show a novel relationship between classes of graphs.

Jagota won the Second Place Medal of Distinction for Innovation for researching the performance of random nanowire networks as a less costly alternative to the transparent conductors now used in touchscreen devices.

Shroff was awarded the Third Place Medal of Distinction for Basic Research for finding relationship between the key protein associated with Huntington's disease and the biological processes of cellular death that cause Huntington's symptoms.

Ravichandran won the Third Place Medal of Distinction for Innovation for using nanomedicine to destroy potentially fatal blood clots that can cause heart attacks and strokes.

Of the 1,750 high school seniors who entered the Intel Science Talent Search 2016, 300 were announced as semifinalists. Of those, 40 were chosen as finalists and invited to Washington, DC, to compete for the top nine awards.

These finalists join the ranks of other notable Science Talent Search alumni, who over the past 75 years, have gone on to win 12 Nobel Prizes, two Fields Medals, 11 National Medals of Science, 17 MacArthur Foundation Fellowships and even an Academy Award for Best Actress.

Punjabi, 17, from Massachusetts, developed software that could help drug makers develop new therapies for cancer and heart disease. He is the lead author of a paper on nanoparticles published in ACS Nano and co-author of a paper on a related topic in Nanoscale.

Kavya Ravichandran, 17, from Ohio, won the Third Place Medal of Distinction for Innovation.