"On so many occasions, I would go close to snakes I find, and start a monologue.

Meet Gargi Vijaraghavan, the 22 year-old animal lover who has rescued more than 2000 snakes so far. 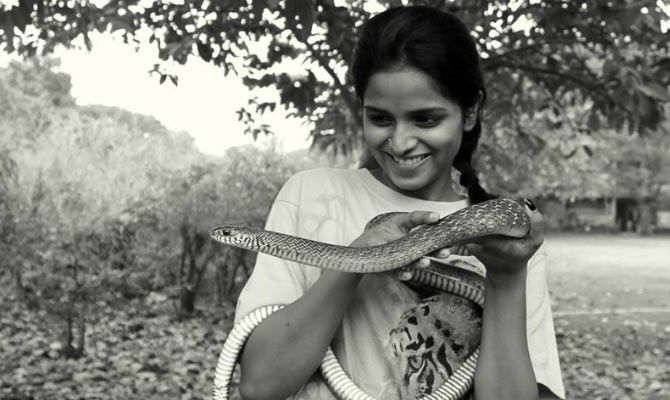 At Sanjay Gandhi National Park in Mumbai, I remember the king of the jungle swaggering towards the railing of his cage, not to roar at us so we retreat; but rather, to blink and nod approvingly at the visitor's desire to approach his territory.

To me, there could be no greater mark of friendship and trust.

The leopard in his cage also rushed to the periphery, purring like a dutiful feline pet to have his head patted.

The same pattern repeated when I walked through the lush green lawns of Raj Bhavan -- every creature on twos and fours was sauntering toward us like a moth to a flame, some woofing, some mewing, others quacking and grunting gleefully, as if to exchange pleasantries.

Both times, I was walking besides Gargi Vijayaraghavan, environmentalist and lover of all things furry. But what I was most awestruck by was her monomania with arguably the most fearsome reptile that crawls the earth -- snakes.

"My oldest memory is of a day when I was crying because a snake had entered my room and was caught and taken away by my father, who is a veteran snake rescuer."

"He started to console me by asking me not to be afraid, only to discover that I was crying because I didn't get a chance to play with the snake! I wanted that snake as a pet. I was very fascinated." 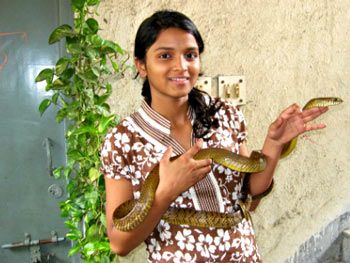 Gargi, 22, grew up in BARC colony, which is on the outskirts of Mumbai, and is nothing like the concrete jungle that is rest of the city.

While most of our instincts would be to sprint in the opposite direction upon sighting a snake, three-year-old Gargi would automatically want to go near it and pet it, as if to want to get to know them.

"I've even tried talking to them. On so many occasions, I would go close to snakes I find, and start a monologue.

Her father, an engineer who grew up in Madras and worked in the Madras Bank, would have his afternoon lunches at Romulus Whitaker's Crocodile Bank, where he would while away hours observing different species of snakes.

This was his base and how he built a connect with these creatures.

Sightings of snakes in their colony's homes and shops wasn't rare. Gargi recollects the day she made her 'debut'.

"My father and I were walking past our local grocery shop when we ran into a mob of people all scared out of their wits because a snake had snuck into the store.

"As we had suspected, the snake appeared to be non-venomous. We volunteered to catch the snake and remove it from the store, and all the yelping people finally calmed down.

"Knowing my affection for snakes, my father let he give him a hand, and together, we took it out of the store and let it free into an open space away from the residential area. Since then, word got out and we became the go-to people for rescues."

Everyone from the local shopkeeper to the Kalyan Fire Department now calls them when distress calls come through. But, her father wasn't so sure his daughter was ready for what she wanted to take on.

"Although I helped him with that operation, he told me, 'until you know all the species, you are not going to come near even one.' I was 13 then.

"During my summer vacation, I diligently studied all the species of snakes, and everything there is to know about them, and convinced my father of my love and dedication towards them.

"He saw it in me, and only then did he start taking me along for rescue operations of non-venomous snakes first, and when the time came, the venomous ones too," she says reminiscing fondly. 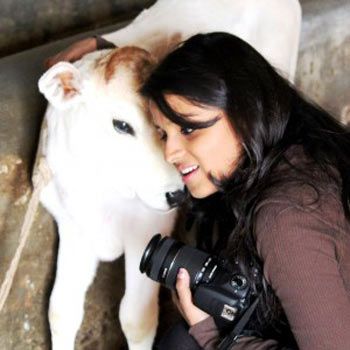 She feels that the human species is a bigger danger to her beloved snakes, rather than the other way round. Our greatest weapon against them is our sheer ignorance.

The task Gargi has taken up is precisely to correct this potential danger, by spreading awareness as actively as she can.

"In India, there are only four venomous species of snakes, the rest are all harmless. I try and tell people at every rescue operation that snakes found outside, which are non-venomous, should be allowed to live there.

"In fact, I have started asking them not to call me for operations where the snake is found outside because that is its natural habitat and I am no one to displace it from its home. I only take calls for snakes found in people's homes now."

In one instance, she even succeeded in convincing people to let a snake they found continue living in that locality, by explaining to them how it would keep the rodent population in check.

"I made them hold the snake so they didn't feel intimidated by it, and by the end of the week, people were clicking photos with it, and one of the women was even keeping the snake fed and watered every week."

Gargi already has almost a decade of experience, and has rescued over 2000 snakes with her father till date. Yet, she doesn't take risks.

She has trained herself painstakingly and is still cautious. But, the men in her life cannot seem to fathom that.

"Even today, a girl rescuing a snake doesn't go down well with men I meet. In school, boys would comment and tease, call me names, and make hissing sounds. I told my mom when I was very disturbed, and she asked me to simply look the other way, saying you know you are doing good work, you shouldn't be demoralised by ignorant and immature acts like that."

"But the baffling part is, this has continued till today, even when I am out on the field. I look tiny and it hurts the male ego deeply when I can do what they can't.

"Men from the crowd overlook the fact that I trained myself for a decade. Instead, they pull boneheaded antics like interfering in the operation and trying to take charge.

"Today, I have a message for them. I am only concerned for their safety, and that of the snake and lastly myself. Just because I am a girl, it does not mean that they will be able to what I do as well.

"I took the pains of researching, studying and practising.

"It's not a piece of cake, and I don't do it just for fun," says this braveheart. 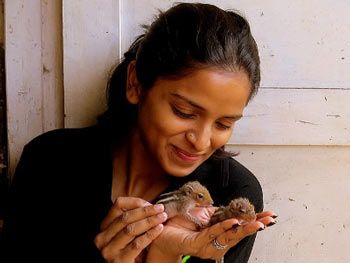 Gargi even speaks at various schools and institutions to raise awareness about how to co-exist with snakes and other animals.

On June 5, 2010, on the occasion of World Environment Day, she received an award from Shradhha Jadhav, the Mayor of Mumbai for her work towards the environment.

The only fees she expects in return for what she does is the love and respect of people, and the saved and cradled lives of the snakes she rescues.

Gargi has also found a way to make her love for all the little animals official.

Upon graduating from the University of Mumbai with a Masters in Environmental Science, she was headhunted by the MyVets Charitable Foundation -- a foundation that is doing everything it can to protect wildlife.

Nowadays, you will find Gargi at the Mumbai Raj Bhavan, personally in charge of ensuring that the 17 peafowls on the premises, who have possibly lived with all 22 of Maharashtra's governors, but whose numbers seem to be waning recently, are restored, well fed, treated, cared for, and loved.