We men use abuses like these, and worse, umpteen times a day, in our normal conversations, even in the presence of our female colleagues, without the least bit of shame and remorse.

None of us men who is guilty of such behaviour has the moral right to upbraid Salman Khan, says Prasanna D Zore. 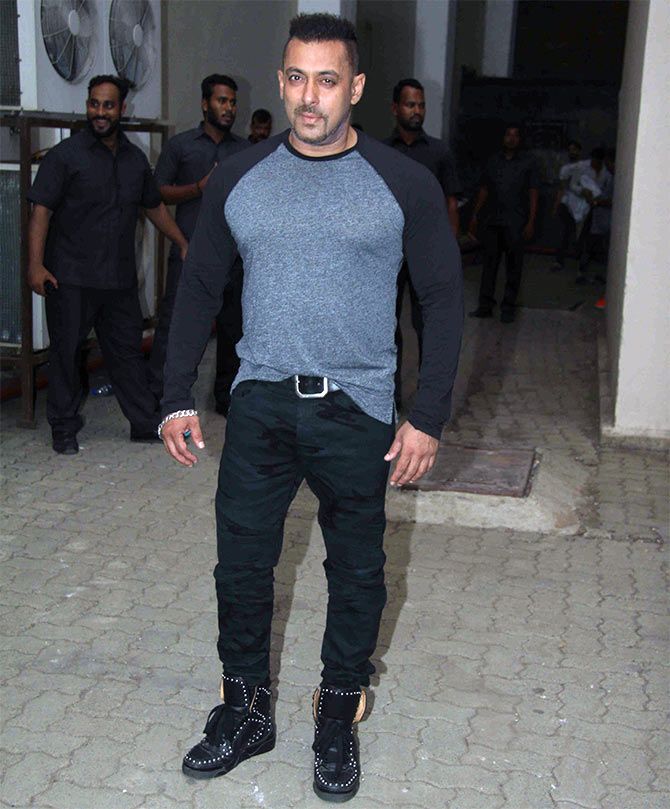 When the Nirbhaya gangrape stunned the entire nation, I heard this statement from many a 'morally upright' male friend: These MFs/SFs (equivalent of Hindi abuses like MC and BC) should be shot in public.

Indeed, what a way to express anger and seek justice for somebody who was violated in the most brutal, most inhuman way. While these friends were genuinely concerned about the way a young woman was raped and killed, the abuses they used to describe those beasts once again invited sexual violence against their mothers and sisters.

In fact, we men use abuses like these, and worse, umpteen times a day, in our normal conversations, even in the presence of our female colleagues, without the least bit of shame and remorse.

And then men like you and I go after Salman Khan which, once again, does not condone what Salman Khan has said and which we all men (with a few exceptions, if at all) utter every single hour of the day.

What fakes we men are, man! What hypocrisy!

Perhaps, just perhaps, Salman Khan would have shunned using the word, had men like you and I not laughed out so boisterously over Chatur's 'balatkaar' speech in 3 Idiots.

That scene from the film sort of institutionalised, made ,'rape/balatkaar' acceptable as a word that could be used in normal conversations in public.

I still remember the audience, including yours truly, going berserk over Chatur's speech as Aamir Khan, R Madhavan and Sharman Joshi play a trick on their naive classmate. A lot of us could still be doing that. A lot of us will continue to do that even now.

What impression does it create in the minds of the audience when actors like Aamir Khan, Madhavan and Sharman laugh their hearts out at Chatur's expense? That BALATKAAR is normal; it is just another word and so it can become a part of one's vocabulary, idiom.

The same is true about using abuses while having conversations with our friends/colleagues/strangers/acquaintances. Words like 'BC' and 'MC' are normal.

At the cost of sounding morally condescending, I stopped enjoying that scene (you have all the right to think otherwise and call me a hypocrite) after it hit me how disgusting those dialogues were, especially when one put those dialogues in the context of what those men did with Nirbhaya.

I have also come across many men/friends who expressed joy at women being raped during communal riots across India (more recently, women were reportedly raped by agitators in Haryana during the Jat agitation, but the police and state administration have not officially acknowledged the crimes) just because these women belonged to a religion/community/caste they blindly and rabidly hated.

Men who otherwise would not dare ask questions or fight for justice for women who were raped by our security forces in the name of fighting extremism and Naxalism -- all in the name of nationalism.

Men, like you and I, who use our eyes to scan women, total strangers, from head to toe, sizing up the female form, using our imagination. We men call it 'eye f......'!

The moral of the story is, none of us men who is guilty of such behaviour has the moral right to upbraid Salman Khan which, again, at the cost of sounding repetitive, does not mean that Salman Khan should be condoned or action not sought against him.

In fact, such men, or men like you and I to be precise, deserve to be categorised in the Salman Khan league or vice versa, for we men are all the same, and, once again, it should be women who should take it upon themselves to fight such indiscrimination without expecting much from the men folk because 'rape/balatkaar' or abuses like 'BC, MC' and all its variants will continue to remain 'normal' till each one of the men folk cleanse themselves of their genetic dominance/disorder.

It is this attitude of men towards women that makes every man in this country indirectly responsible for dozens of rapes of women, or utterances like that of Salman Khan, that take place every day in this country.

Till the time we men cleanse ourselves of this malaise, women beware. For there is a little bit of Salman Khan, even a little bit -- sometimes, more -- of the rapist in all of us.

All those who are berating Salman Khan, watch this Rajesh Khanna song from Roti that aptly sums up the sinners that we men are and how we raies the flag of morality without checking ourselves out first in the mirror!

Which, again, is not my case that Salman Khan or whoever exhibits such crass insensitivity towards women should be condoned. Every such man should be penalised, but please, only those people come forward with a stone in their hand who are not guilty of Salman Khan-like insensitivity or disrespect for women.