'Being shut indoors with an abusive partner has made life a lot worse for women, and domestic violence helplines have reported a significant rise in distress calls at this time,' observes Shuma Raha.
Illustration: Dominic Xavier/Rediff.com 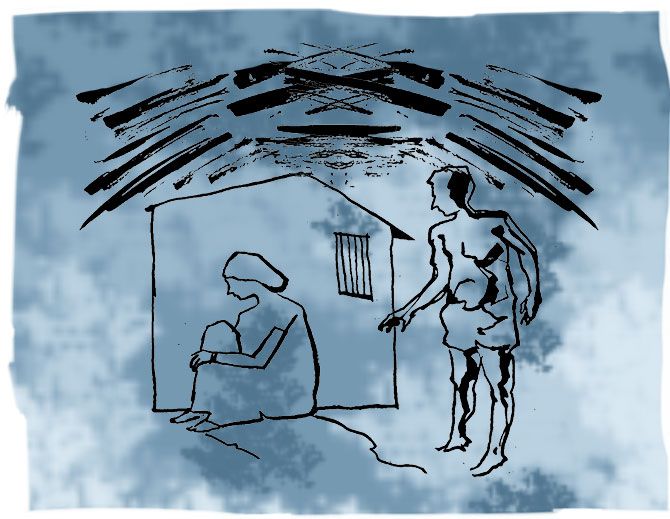 Actor Nandita Das recently released a short film called Listen to Her, where she plays a woman who juggles work-from-home with her work-at-home responsibilities.

We see her trying to do a video call with her colleagues while being constantly interrupted by her young son and a husband who throws out orders at her from off screen.

And then she gets a call. An abused woman, wanting to reach out to a helpline, calls her number by mistake.

Das listens in horror to the sounds of the woman's screams and the squeals of her child as her husband beats her up.

Later, she listens to the woman tell her about the violence she suffers daily. And then Das experiences a transformative moment of quiet rebellion: the next time her husband asks her to do one more chore, she shuts the door on him.

The lockdown has seen a sharp spike in the incidence of domestic violence, and Listen to Her, a crisp, seven-minute film, shot at Das's own home, mainly draws attention to it.

Being shut indoors with an abusive partner has made life a lot worse for women, and domestic violence helplines -- not just in India, but the world over -- have reported a significant rise in distress calls at this time.

Remember the woman in Vadodara whose husband assaulted her and fractured her spine because she beat him at Ludo? Incidentally, instead of throwing him in jail, the police let the man off after 'counselling' him. But that's another story.

Domestic violence is not the only sort of abuse women face at home. And Das's film scores because it juxtaposes brute violence with a subtle form of domestic abuse -- letting women shoulder the bulk of household responsibilities.

It makes the point that they are, in fact, two sides of the same coin -- both springing from the belief that the woman is an inferior being, a servitor, who can be kicked around literally or figuratively.

In most countries, women, irrespective of whether or not they have full-time jobs, end up doing more housework than their male partners.

In recent months, studies in the West have shown that prolonged lockdowns have put even more pressure on women.

They have struggled to cope with the demands of WFH along with housework and children being schooled at home.

More often than not, if one partner has to sacrifice a work-related video meeting because of some urgent domestic or childcare issue, it's the woman who does it, especially if hers is the lower paying job. 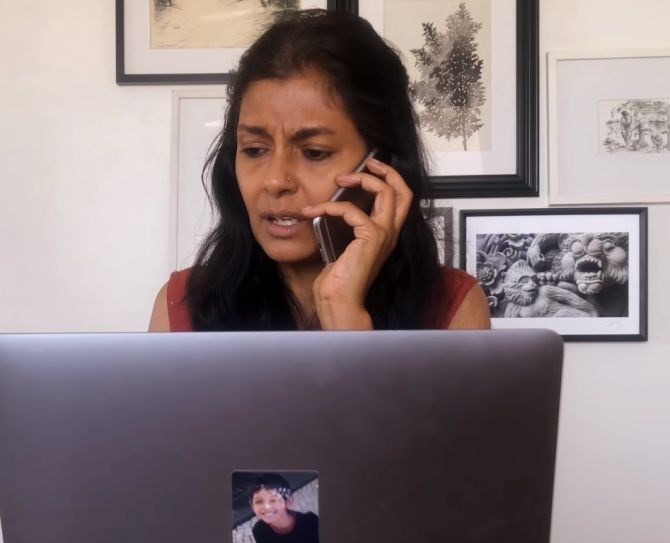 IMAGE: A scene from Nandita Das'S Listen to Her.

My informal conversations with women friends bear this out. With the exception of a few whose partners are exceptionally helpful and considerate, most say that in the absence of any hired help during the lockdown, they have been forced to take on a disproportionate burden of the relentless housework, kitchen and childcare duties, all the while trying to keep up with working from home.

Moreover, in the early days, some cooked and baked enthusiastically, yielding to the glowing social media propaganda that the lockdown was a great time to find one's inner domestic goddess.

It was such a trap to make us work more and get all excited about it, a young female acquaintance told me with disgust.

The situation is unlikely to change any time soon.

Though the lockdown is being lifted in India, the rising coronavirus caseload will ensure that most will continue to work from home, continue to be fearful of getting hired help, and baulk at sending children to school.

In other words, many women will continue to feel overwhelmed with ceaseless demands on their time.

There have been reports in the UK that article submissions from female academics have fallen drastically during the lockdown, because women have been too exhausted trying to juggle multiple duties at home.

Studies also suggest that so far, more women than men have lost their jobs in the economic fallout of the pandemic.

And around the world, there is evidence to show that prolonged stay-at-home orders have affected women's mental health far more than men's.

The virus may be killing more men than women, but the pandemic's social and economic effects are turning out to be disproportionately skewed against women.

Shuma Raha is a journalist and author