Will the beard continue to be in vogue once WFH wraps up? asks Sandeep Goyal. 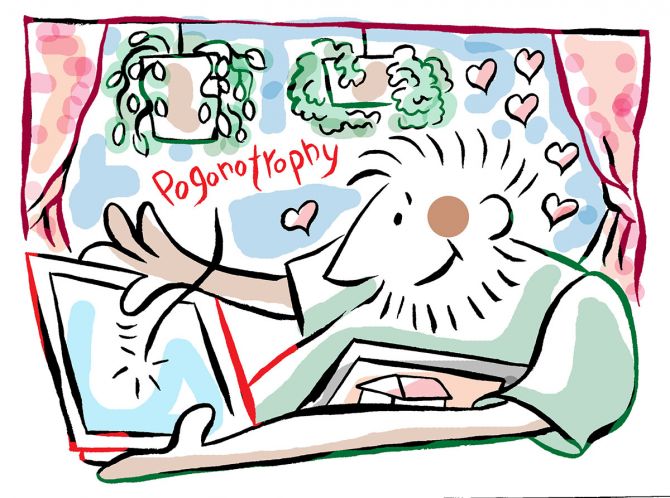 Known for his penchant for rarely used English words, Shashi Tharoor, sent the Twitterati running for their dictionaries with another head scratcher -- pogonotrophy -- which means the growing or cultivation of a beard.

Mr Tharoor used the word to take an apparent good-natured dig at Prime Minister Narendra Modi who has allowed his beard to grow considerably longer during the past pandemic months, giving him almost a Rabindranath Tagore like look.

It is kind of coincidental, and somewhat surprising, that men's facial hair is suddenly the subject of much academic discussion, and attention too.

In his recent book, Anthro-Vision, Gillian Tett, editor-at-large of The Financial Times, in fact, writes about how in the spring of 2020, she started noticing on video calls that many normally clean-shaven American and European men were sprouting beards, in sync with the COVID-19 lockdown.

When asked why, the answers she got were, 'I don't have time to shave' or 'I am not in the office, so there is no point.'

To Ms Tett it did not make any sense: In the lockdown most men presumably had more free time anyway, and had every incentive to present a more professional 'face', as on a Zoom call your visage is actually in extreme close up and a scrubbed clean shaven look would have been so much more impressive.

It is interesting to note that half a century ago, an anthropologist named Victor Turner who worked in Africa, developed a concept known as 'liminality' that helps perhaps to best explain the explosion of facial fuzz.

Turner's theory posits that most cultures employ rituals and symbols to mark transition points, be they in the calendar (say a New Year), the start of a life cycle (entry to adulthood), or a big societal event (national independence). These are called 'liminal' moments, named after 'limens', meaning 'door-way' in Latin.

A common feature of liminals is that the usual symbolic order is inverted, in fact, presented in opposition to 'normality', to mark a transition moment.

When normally clean-shaven men suddenly sprouted beards during COVID-19, it seemed this was one such liminal symbol.

Since beards were not 'normal' for many professional men, sporting them signalled that they viewed the lockdown as abnormal-- and, most crucially, transitional.

But the intriguing question is whether these fuzzy-faced financiers, professionals, lawyers and so on, actually explained their beards just quite in that manner? Symbols and rituals are powerful precisely because they reflect and reinforce cultural patterns of which we are (at best) most times only dimly aware.

Of late, I have noticed that almost every player in the Indian cricket team now sports a beard.

Did they do it to emulate their eminently famous bearded captain, Virat Kohli? Or is there more to it? International research would have us believe that the more competition a primate has to deal with, the more flamboyant he tends to get.

The hypothesis is that in big, multi-level societies, male primates have to develop more conspicuous 'badges'.

Feedback from the research clearly shows that men with beards are perceived as being more masculine and more dominant than barefaced men -- 'So it's possible that male facial hair is also the outcome of inter-male competition'.

The aggression part of the equation comes from the notion that beards are a sign of active testosterone in the body, and the brain thus recognises the beard as having the potential to exhibit aggression and exercise control.

Now to sex appeal. Women like stubble. But they tend to favour heavy stubble over lighter stubble when it comes to overall attractiveness.

Women find men with facial hair to be more masculine than those without. And there is an added bonus too: Men who are perceived as being more masculine, are also hailed as better providers. True or not, is a matter of perspective and interpretation.

Bearded men are also said to be more trusted. Yes. And the beard often commands more respect too.

A beard makes men look wiser, older, more learned (and certainly more experienced) than their clean-shaven brethren. But in a job interview, clean-shaven men seem to have an advantage when it comes to entry-level positions while a well-groomed beard may help when it comes to landing more executive-type positions.

That's perhaps because beards can help men to be perceived as mature, knowledgeable and dominant -- and, hey, people tend to respect people like that, don't they, especially in higher echelons?

Will the beard continue to be in vogue once WFH wraps up? Not easy to predict.

In this pandemic time somehow started to be measured in days, weeks and beards! The urge to indulge in pogonotrophy may not have been universal, but it did prompt most men to appear somewhat macho and look 'beardiful'.