'Attempts to buy myself a pair of jeans proved unfruitful because there didn't appear to be a pair that wasn't ripped by design'.
'All the fashion seemed to be for the sickeningly young,' reports Kishore Singh after a recent trip to the mall.
Illustration: Uttam Ghosh/Rediff.com 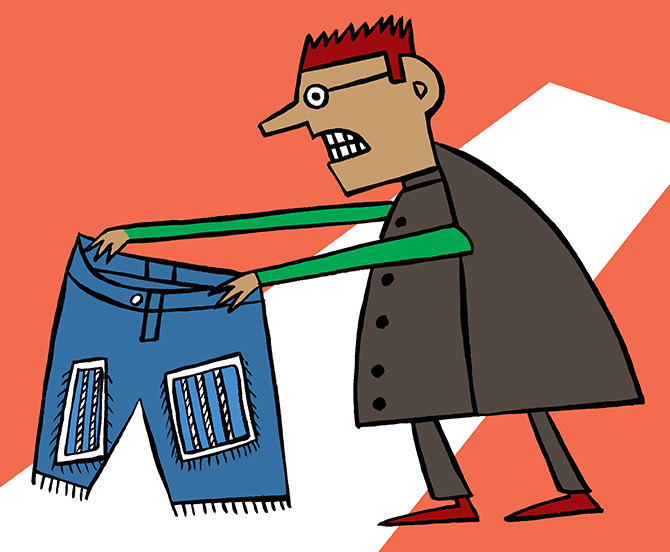 I know I am mall agnostic.

I don't like going to them because it seems to me there are too many people breathing the same stale air and talking far too loudly.

Being of a certain generation, I am also shocked by the display of affection in what most assume is an anonymous place.

Is it normal for young couples to embrace in public? Indians?

Who are these people when they are at home?

No wonder my children stopped accompanying me to malls because I had taken to gawking openly at strangers and the stranger goings on.

If I needed to buy myself a pair of running shoes, or Ts, they would become busily employed.

Without them, I'd be lost. How do you locate where the stores are?

Given my sense of direction, I could never find my way around despite -- or because of -- the multiple escalators whizzing off in opposite directions to the place I'd hoped to navigate towards.

Determined to get some shopping done, I inveigled my daughter for lunch to a favourite restaurant that just happened to be in a mall.

She delayed the inevitable as much as possible, pleading urgent office work as an excuse, till it was so late, we barely made it in time for our reservation.

Having dawdled during the course of the meal -- hoping, no doubt to spend as little time as possible in the aisles -- she soon found herself with an ageing parent holding desperately on to her arm so I wouldn't get swept away by the crowds and be lost.

I had thought I had a shopping plan, if not a list, but I was also curious about what was on offer at the stores.

Determined to keep me on the straight and narrow, my daughter tugged me towards what she hoped was our shopping destination, a multi-label store, but I was equally adamant about making the most of my afternoon at the mall.

I peeped into shops that stocked clothes, or housed casual wear. Most seemed to offer summer wardrobes for extremely slim people.

Worse, they seemed to have nothing for the middle-aged.

It was as if our age group didn't matter, or exist.

Did they have jackets, I asked at one counter.

"Yes ma'am," the sales person responded not to me, but to my daughter, "follow me this way", escorting her to the women's section, leaving me sputtering.

All the fashion seemed to be for the sickeningly young, and no amount of pottering around threw up anything that was more age-appropriate.

Nor were there any older people around -- until I caught a glimpse of myself in a mirror.

India's young population was evident in its abundance, its middle-aged less so.

I returned without any shopping bags (though my daughter had quite a few).

At the shoe store, the salesman had ignored my request for a pair for so long, I'd walked off in a huff.

Attempts to buy myself a pair of jeans proved unfruitful because there didn't appear to be a pair that wasn't ripped by design.

The concept of a shirt with an Oxford collar seemed alien to most, and no one could find me a pair of formal trousers.

Dismayed, I complained to my wife at home that India no longer seemed a place for somewhat older people.

"Of course you're right," agreed my wife, crossing her legs in her skinny, frayed jeans and too-tight shirt, "but if you can't beat them, join them."