Time to say cheers for the millennials

'With more and more young people relocating outside their home states for work, an all-India MLDA of 21 would be a good way to ensure that more Indians can go with the flow,' recommends Kanika Datta. 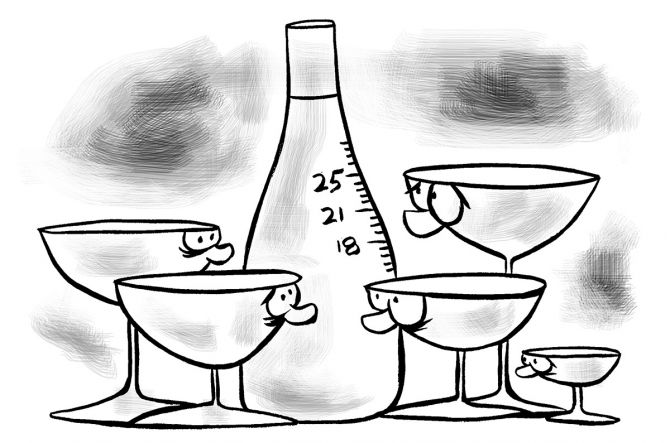 On the cusp of this year's subdued New Year's Eve revelries, that quintessentially Indian institution, a government committee, recommended that the state of Delhi reduce the minimum legal drinking age (MLDA) from 25 to 21 years.

That should certainly cheer Delhi's thirsty and upwardly mobile youth after the sobering dismissal of a petition to lower the drinking age by the Delhi high court in September 2019.

Delhi is among a handful of states and Union Territories -- Punjab, Haryana, Chandigarh and Maharashtra being others -- that mandate an MLDA of 25 years.

Kerala, ever the outlier, has an MLDA of 23 years.

Most states mandate 21 years, with some, such as Rajasthan, Sikkim and Mizoram, having an MLDA of 18 years.

There's a tipsy logic to the high MLDA in Delhi and other states.

If youngsters below 25 can't be depended on to drink responsibly, how come these same Indians have been entrusted with far more important responsibilities, such as voting, marrying and obtaining a driving licence, between the ages of 18 and 21?

In bottling up the spirit of their youth, these states are, in fact, global outliers too.

Nineteen fabulous countries have no MLDA at all -- and that includes China.

Two countries (Antigua and the Central African Republic) have set the MLDA bar low at 10-15 years.

And 20 countries -- among them technological powerhouse Germany -- have an MLDA of 16 to 17.

Some 16 countries, all Islamic, join Gujarat and Bihar in prohibiting drinking at any age.

Some Islamic States make exceptions for foreigners, a reminder of those strange rules in force in 1970s India when only non-Indians were permitted to drink alcohol in bars and restaurants.

Let's raise a retrospective toast to the ingenuity of the hospitality industry in devising ways for their Indian customers to imbibe.

In the big cities, decorously pouring whiskey or rum from a teapot into teacups was one popular solution.

Up in the Nilgiris, managers of tea planters' clubs learnt to bill for samosas and pakoras for every peg of alcohol served to circumvent the need to acquire Kerala's prohibitively expensive liquor licences.

It was the same creative spirit that enabled state excise departments, in close cooperation with their police forces, to work out ways to manage the Supreme Court's extraordinary 2017 ruling banning liquor being served 500 metres from state or national highways.

Many households don't serve liquor, people mostly don't drink in front of their elders and most women abstain (the bhang-laced thandai on Holi being an exception).

The tradition of social drinking was also rare enough to guarantee a wild binge by at least half the men attending any occasion at which alcohol was served.

But economic liberalisation has gradually liberalised attitudes to drinking.

In 2007, liquor manufacture was delicensed, a move that saw liquor brands -- Indian and foreign -- pour into India (many more would have flowed in had there not been stringent state rules on sales and distribution), a move that coincided with rising middle class incomes driven by the IT and ITeS revolution.

Suddenly, educated youngsters had money to spend, and India's bar culture responded by transforming itself from sleazy to mainstream respectability.

At the start of the third decade of the 21st century, middle class India has unquestionably imbibed the concept of drinking as a mode of relaxation rather than as a medium to attain oblivion (or misbehave).

A growing number of women, too, need no longer wait for the Holi thandai.

So, we've all come a long way, baby, but that wasn't the reason this committee set up by the Delhi government was considering the MLDA question.

Chaired by the excise commissioner no less, the remit was to suggest ways to augment state excise revenues and check duty evasion by the liquor trade.

The recommendation to lower the MLDA, then, is purely a revenue concern, but it implicitly recognises the existence of a social drinking culture in urban India.

Instead of spending their money in Delhi pubs and bars, young people were driving to the great National Capital Region hub of Noida, and the excise from their bar bills was flowing into Uttar Pradesh's coffers.

A lower MLDA offered the opportunity to reverse that flow.

Together with reducing the number of dry days and allowing supermarkets to stock beer and wine (defined as 'soft liquor'), the committee has made recommendations that can only be described as heady.

Now that the central government has adopted the tradition of passing 'model' laws that straddle concurrent subjects in the Constitution -- land, labour, motor vehicles, farming -- a model law on alcohol consumption is overdue.

With more and more young people relocating outside their home states for work, an all-India MLDA of 21 would be a good way to ensure that more Indians can go with the flow.